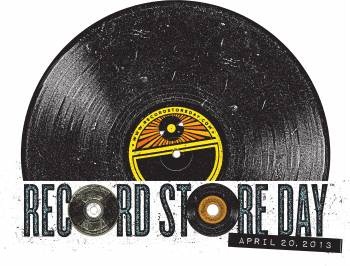 In 2010 for Record Store Day I spent the afternoon in front of Rough Trade West, where The Magic Numbers were playing on the pavement, with the crowd moving for every car coming by. I went back home with a heat stroke but also with a couple of Sigur Ros vinyls. And being my first, was also an amazing Record Store Day.

This year I personally plan to keep things quieter and literally go down to my local record store (Audio Gold in Crouch End), even because the only gig I really would go the distance for would actually require distance to be covered as The Wedding Present will play at Truck Store in Oxford.
But at least I am well prepared beforehand to know exactly what I want to get my ears on, and hoping you won’t literally snatch it out of my fingers, here I can share with you my list, considering all releases from special numbers made exclusively for RSD2013 to re-released all time favourites (I saw some Bowie, Stones and Cure amongst those)

RECORDS I JUST NEED TO HAVE
(and you should too)

Grouplove/Frightened Rabbit & The Manchester Orchestra – Architect/Make It To Me – 12”
This is the reason I remembered it must be time for RSD again. A most unexpected collaboration between the scottish band, mixed with the emotional sound of Manchester Orchestra and the uplifting vibe of Grouplove? I love all three bands and yet this is a collaboration I could not fathom, but they say good comes from good, and even just one of their names on a record would make me buy into it. If all three are there, this is definitely the one record I don’t want to miss.

Pulp – After You – 12”
When everybody had lost hope to ever see Pulp in a different way from the solo project of Jarvis Cocker, here we all were proven wrong and they came back. “After you” was initially given away as a present on Christmas Day 2012 to fans who attended Pulp’s Sheffield Arena show on 8th December, and then released for everyone to have in iTunes in January. It is likely to be the only physical release this one and only *new* song from Pulp will ever get out of the 2010s, so quite sought after I expect.

Edwyn Collins & The Heartbreaks – What Are You Doing, Fool? – 7”
The sweetest thing about this release is that I’ve seen The Heartbreaks since their beginning, and to see them collaboration with Edwyn Collins, being the Orange Juice fans they are, I know it must have been a real accomplishment to them. Mr Collins has all my trust already for his releases and the ones he picks for his AED records, so not much can be said there, but The Heartbreaks’ had the very rare ability to make a debut album that was literally a non-skip. The nostalgic aura they have around I always thought to be simply pure quality in vintage disguise, and I am incredibly curious to hear what they have done here. And cherry on top, the b-side is Untitled Melody by Orange Juice sung by Mr Collins and Matthew Whitehouse from The Heartbreaks. Can you wait?

British Sea Power – Facts Are Right – 7”
If you are a BSP fan I don’t have to tell you much. Their new album Machineries of Joys is just out, and this 7” features something new, yet something you won’t find in the album, or anywhere else. It’s a now or never situation. I go for *now*.

Frightened Rabbit – Norland Wind – 7”
This song is somewhat available beyond RSD, but only to those who pre-ordered via iTunes a copy of the recently released Backyard Skulls EP. So in case you weren’t amongst those, here’s another limited chance. By the way Frightened Rabbit have been seriously busy for this RSD, isn’t that lovely?

Dog Is Dead – Do The Right Thing/Teenage Daughter – 7”
Despite the fact they are resisting kidnapping by GiTC.TV, Dog Is Dead are disgustingly good and Teenage Daughter is probably the reason you know that. This double A side is exclusive for RSD but both songs are available on their album “All our Favourite Stories”, so it’s mostly for the object than the music if you want to get your hands on this…

MGMT – “Alien Days” – Cassette
I think what MGMT are most afraid of is doing something that can in any way be considered normal. So just to make sure, in the celebration of Vinyls that is RSD, they decided to release a cassette single. Like the early 90s. How sweet? Alien Days also happens to be the first release from their upcoming third album… but does anyone still have a tape player around? I mean someone who doesn’t live in east London and has a Lomo at least?

Filthy Boy – Smile That Won’t Go Down – LP
This album is actually out in its regular form, but don’t think for a second that entitles you to overlook it. Au contraire I urge you to get your ears on it in either its original form or this special RSD vinyl release, as the debut by Filthy Boy is unlike anything you’ve heard, expect if you are a Nick Cave fan probably.

Placebo – B3 EP – 10”
This EP features the newest stuff by Placebo following Battle for the Sun, and has been released in the Fall of 2012. Exclusively re-release as a vinyl for RSD, might be a very nice add-on to a vinyl collection.

Sigur Ros – HVARF/HEIM – 2LP
Sigur Ros could sell used, broken bow strings (which they actually give away in competitions) and they would still sell. I would be the first to buy it, mind. As for some other releases, this is an oldie, the original double CD came out in 2007 but this is the first vinyl release of HVARF/HEIM. And vinyl always look good on Sigur Ros.

There’s really nothing I can say to add anything to these historical albums which will get a special new vinyl release for Record Store Day 2013, but you need to know they will be out, and you might want to get a chance to have a proper vinyl of these in your hands. Especially for what concerns the following titles:

I wish you good luck and good loot on Saturday 20th of April 2013, and if you are in North London I’ll see you (hopefully not argue over the last copy of the Grouplove/Frightened Rabbit/Manchester Orchestra release) at my local record shop Audio Gold in Crouch End!