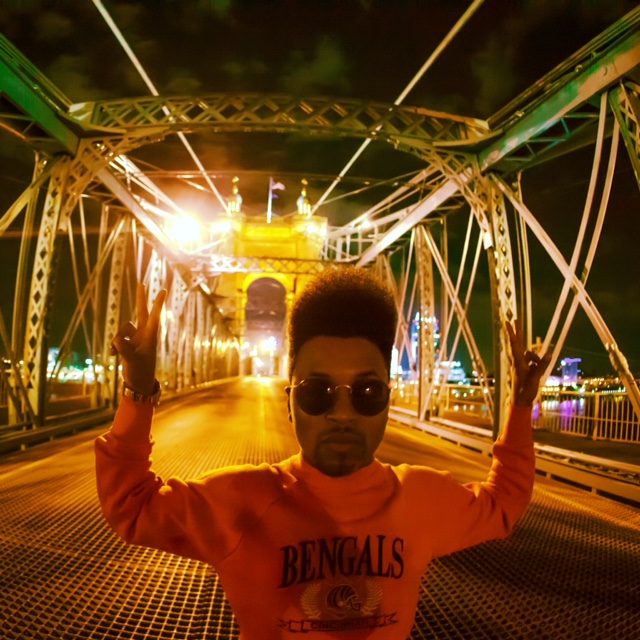 As Cincinnati rapper Buggs tha Rocka gets set to drop Scattered Thoughts of an American Poet, he talks to GIITTV about making genuine music, his love of anime and being co-signed by Talib Kweli.

Buggs tha Rocka may not yet be a household name, but his achievements to date are enough to make serious hip hop fans sit up and pay attention.

His triumph at this year’s Cincinnati Entertainment Awards – bagging Best Hip Hop Artist – is just the latest indicator to the Ohio native’s talent.

Probably more impressive than scooping gongs at the CEA two years in a row is the love shown to him by hip hop hall of famers. Buggs has released mixtapes hosted by DJ’s Mick Boogie and Clockwork, while Donte from MOOD, Hi Tek and Talib Kweli have become long-term mentors and supporters of the come-up wordsmith.

Not bad for a guy whose musical exploration began at age six with the unlikeliest of gifts. “My mum gave me a harmonica of all instruments at the time. She wanted me to be like Stevie Wonder, but I guess I had other plans,” says Buggs.

A keen poet that “sucked at playing harmonica” Buggs was eventually lured into the world of hip hop because of how “honest and truthful it was”.

“I wasn’t allowed to listen to hip hop in the house, but I got tapes from my older brother who was in high school,” says Buggs before explaining why the genre was banned in his house: “Rap music was violence and profanity – that’s what they thought. They didn’t realise there were different styles of hip hop because all of the stuff that was promoted was negative.”

Influenced by hip hop’s Golden Era, Buggs’ music is a concoction of conscious rhymes, intelligent wordplay and creative flow; explanation enough for why Talib Kweli has taken a keen interest.

“When he co-signed me on stage at AC3, I was like ‘this is serious.’ I went on tour with him. Before that we were kicking it and I was hanging with a legend. It was weird he liked my music, it was a weird and surreal feeling,” he says clearly humbled.

The gift of the pen is not the only thing that sets Buggs apart from his contemporaries.

His sky-scraper haircut and choice of clothes isn’t what you would call standard hip hop garb, but dressing like this for as long as he can remember Buggs laughs: “I’ve always had my own individual style. Some people say unique, some people say weird.”

Looking to fashion magazines and blogs for ideas, Buggs says he is deeply influenced by things going on in Japan. His love of Japanese culture includes Bathing Ape and another of its famed exports – anime.

Describing himself as being “big into manga and anime”, he becomes animated and says: “It is so funny you should ask me about manga, because my next video is based on an anime: Full Metal Alchemist. It’s going to be the visual for Angel of Death.

“I’m very excited about putting it out because I don’t think many people have done videos like this. And the people who have, I am very sure they haven’t used this anime.”

Needless to say, it would be near impossible for anyone to classify Buggs as just another rapper concerned with bitches, bling and Bugatti’s. While capitalism and all the trappings that come with it provides the majority of subject matter for a good few rappers enjoying success, Buggs has a knack for portraying the myriad of emotions and experiences faced by the average person.

“I’m inspired by people, situations and things that happen around me. The beat is just the soundtrack to the emotions I’m trying to get out and it’s like having a conversation with myself or a real close friend. One minute you might want to save the world and the next minute you say: ‘fuck the world’. But it’s cool to feel like that. It means you’re real – you’re a human and not a robot. You can’t wake up like a tough guy or wake up conscious every day,” Buggs says.

It’s hard not to be impressed by the level of passion and commitment Buggs exudes when talking about hip hop and what he has to offer the culture. His desire to produce honest, sincere music is translated perfectly into his latest EP Scattered Thoughts of an American Poet. While music loosely termed “conscious” or “real hip hop” can at times suffer from being sanctimonious or contrived, Buggs serves up an authentic, relatable body of work that captures the essence of its namesake.

“It really is scattered thoughts: things I was feeling and needing to say. Instead of focusing on a concept, it was more about making genuine music and great songs. It’s kind of hard to put your life into 60 minutes so I had to take it one track at a time.”

Wrapping up, Buggs gave a shout out to all the people who have supported him so far: “Much love to all the Space Invaders who want to get familiar and who are already familiar with the movement!”