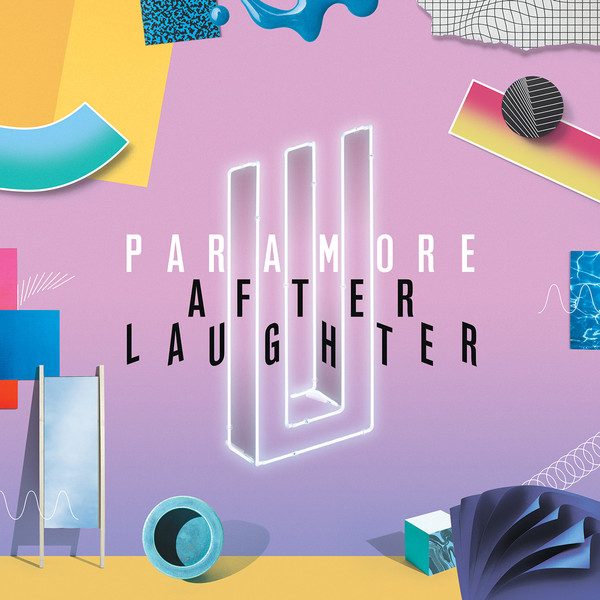 The increased affection I have for Paramore can be traced directly to their transition from an emo rock band into a pop one. There’s always been an accessible side to their music, but it wasn’t until 2013’s self-titled record that the line between their rock and pop became less defined. Songs such as, ‘Still Into You’, ‘Ain’t It Fun’ and ‘Grow Up’ were their most commercial and pleasing releases to date. It was a direction that suited them well and felt the natural progression for their sound. For their fifth album, After Laughter, they’ve almost completely shed their emo rock past completely and blossomed into one of the finest pop bands around.

Paramore’s pop side is no more apparent than on the single-of-the-year contender, ‘Hard Times’. It shares similar ingredients to the 2008 school of vibrant 80s-inspired pop (The Ting Tings, Friendly Fires and especially Alphabeat). There’s a colourful and sleek bounce thanks to the bursts of Taylor York’s new wave guitar riffs. The juxtaposition between the upbeat music and Hayley Williams’ pessimistic lyrics, “these lives and I still don’t know how I even survive” make ‘Hard Times’ a triumph.

‘Rose-Colored Boy’ contains a Tom Tom Club like chant and a tight bass-line that introduces a funk element to their sound. ‘Told You So’ is bursting with tight hooks and jagged Duran Duran-style guitar playing. After Laughter is a good companion piece to the last 1975 album — they both borrow from glossy 80s sophisti-pop where polished guitars take centre stage and subtle touches of synths bubble underneath.

‘Forgiveness’ features a skipping rhythm, an R&B laidback groove and airy Fleetwood Mac-inspired harmonies that would fit perfectly on Haim’s first album. Williams even seems to be channeling their mannerisms vocally. It’s a similar story on the gorgeous closer, ‘Tell Me Now’,and on ‘Pool’, which has an infectious chorus that’s a nod to Paramore’s emo past.

The more understated arrangements on After Laughter give Williams an opportunity to highlight the exceptional vocalist she’s become. The emotion and conviction she conveys on ‘Fake Happy’ is heartbreaking. After a misleading acoustic intro, a bright synth appears and redirects the song. Williams sings, “I should’ve known that when things were going good that’s when I’d get knocked down” which hits hard before warm, layered backing vocals build and offer some comfort to the listener.

On ‘Caught In The Middle’, there are tinges of reggae reminiscent of No Doubt (another group who shed their rock past and became more pop with each release). Williams opens the song with some of her most direct lyrics, “I can’t think of getting old, it only makes me want to die”. In the bridge, she then repeats, “no, I don’t need no help, I can sabotage me by myself” turning the depressing lyrics into a mass singalong. Despite the dark subject matter, she does offer some light as she sings, “hold onto hope if you got it, don’t let it go for nobody” on the delicate ‘26’. It’s a tender ballad that’s in line with some of Paramore’s most moving songs from previous albums: ‘The Only Exception’ and ‘Hate To See Your Heartbreak’.

Every song on After Laughter feels vital – apart from ‘No Friend’ which would make a better short interlude than a full song. The inaudible lyrics (courtesy of Aaron Weiss from mewithoutYou) make it a frustrating listen. It’s out of place with the rest of this wonderful record. It’s a small complaint overall.

After the surprisingly high quality of their last release, Paramore have made another essential record. The pristine production matches the songwriting at every turn and makes these beautifully-executed songs come to life. After Laughter is a human album where the catchy, upbeat tunes often feel like a coping mechanism for anxious and depressive thoughts.

After Laughter is out now on Fueled By Ramen.