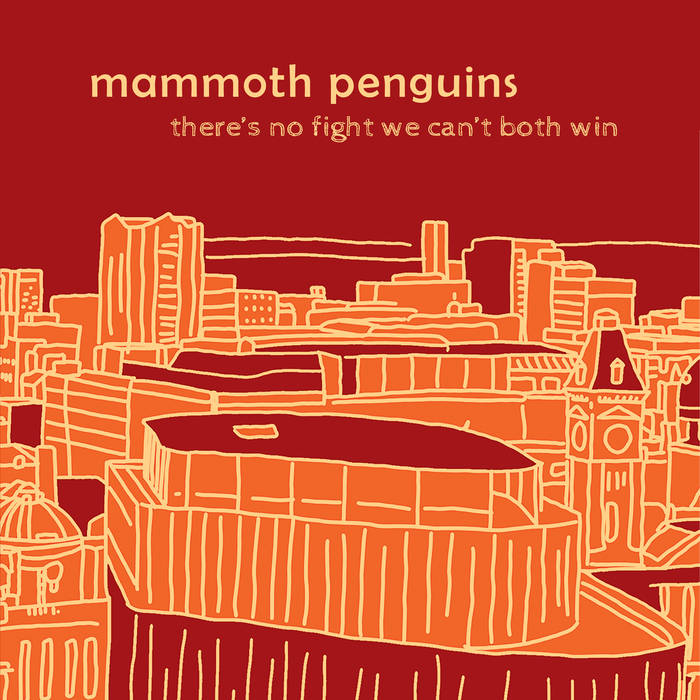 Should Mammoth Penguins singer Emma Kupa ever get bored one day and, rather than sitting there twiddling her thumbs, instead choose to go on the revamped version of Stars In Their Eyes, I’m pretty sure that, tonight Matthew, she would be David Tattersall.

Certainly, the melodies composed by the Cambridge based trio are highly reminiscent of the Wave Pictures main man, as is the dry lyrical wit, so a lot of fun could be had, post make-up department, by hiding in David’s bedroom until the time comes to startle him, leaping out of his wardrobe so he is faced with a twisted vision of himself descending towards his duvet. Plus, this story would undoubtedly have the added bonus of being fashioned into another brilliant song on their next album. The Wave Pictures, after all, are ace. You can join the dots here – Mammoth Penguins are ace too.

“Never really understood what closure was,” sings Kupa on opening track, ‘Closure‘, before continuing “last time we met, it’s what I got” to a prettily strummed, restrained guitar opening, before becoming a blistering indie anthem after the admission that “we pissed off all your friends, staying to the end.”

‘There Is So Much More‘ begins with an easy lament reminiscent of Joe Jackson‘s 1979 hit ‘Is She Really Going Out With Him?‘ and proves that the Penguins are more than adept at tugging your heartstrings as well before ‘I Wanna‘ goes all sweary on us with words that I’m sure we’ve ALL used at some point in our lives: “fuck it all, fuck it all,” Ironically this would be arguably the most radio-friendly track, were it not for the expletives, but then it’s a double-edged sword, because it wouldn’t be half as effective without them!

Perhaps the most fruitful of the numbers here is the dreamy ‘Quit My Job‘, in which Kupa justifies her actions, despite the fact that she’s now cold and broke, on account of the fact that her former workplace “felt like prison” but “that’s all gone now” – a real two-fingered salute to her unhappy past.

Mammoth Penguins have come on in leaps and bounds here. This is simply a great album.

There’s No Fight We Can’t Both Win is out now on Fika Recordings.