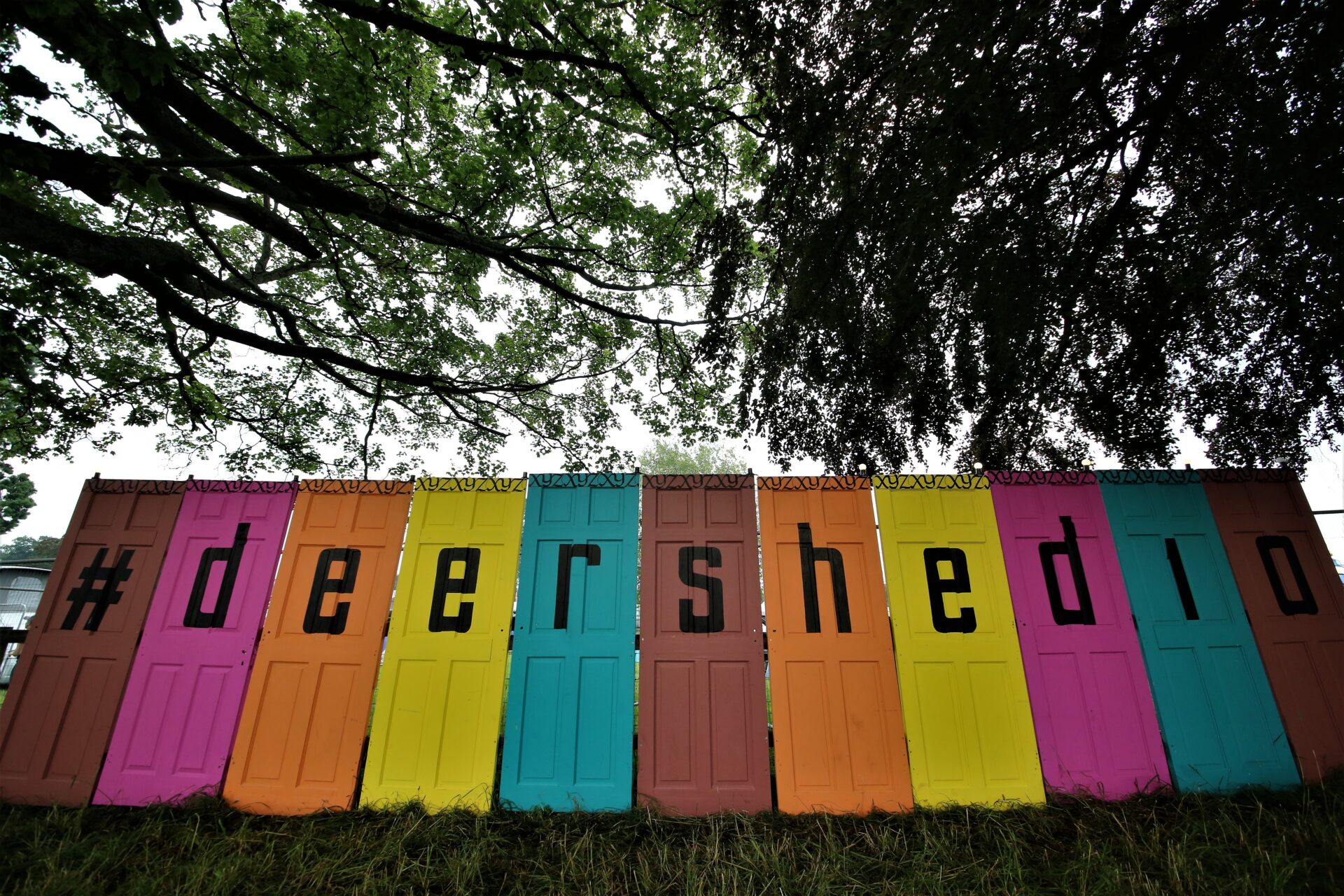 With Thursday having been the hottest July day on record, with July well on course to be the hottest month ever and with the uncertainty of climate change very much in mind you did begin to wonder if something had to give over the weekend. And it most certainly did. Temperatures dropped, the heavens opened and Baldersby Park in North Yorkshire was subjected to the most tremendous of downpours. But not even such inclement weather could dampen our spirits or prevent us celebrating Deer Shed Festival’s 10th anniversary. Come hell or high water we were determined to enjoy ourselves. The festival organisers had indicated that we were in for some fantastic entertainment to mark this very special occasion and they held good to their promise.

There was going to be wall-to-wall comedy, a wide variety of theatrical shows, no shortage of science based activities and workshops in keeping with this year’s Deer Shed Festival theme of Generation XYZ, more sporting events than you could shake a stick at, bags of spoken word, literature and podcasts, opportunities to get back to nature in Wilderworld, the chance to sit back and watch lots of films, plus plenty of fabulous fun for the under 5s. There was going to be something for every one of all ages. But sadly you can’t see or do it all so God Is In The TV chose to focus almost exclusively upon the music that would be on offer over the weekend. 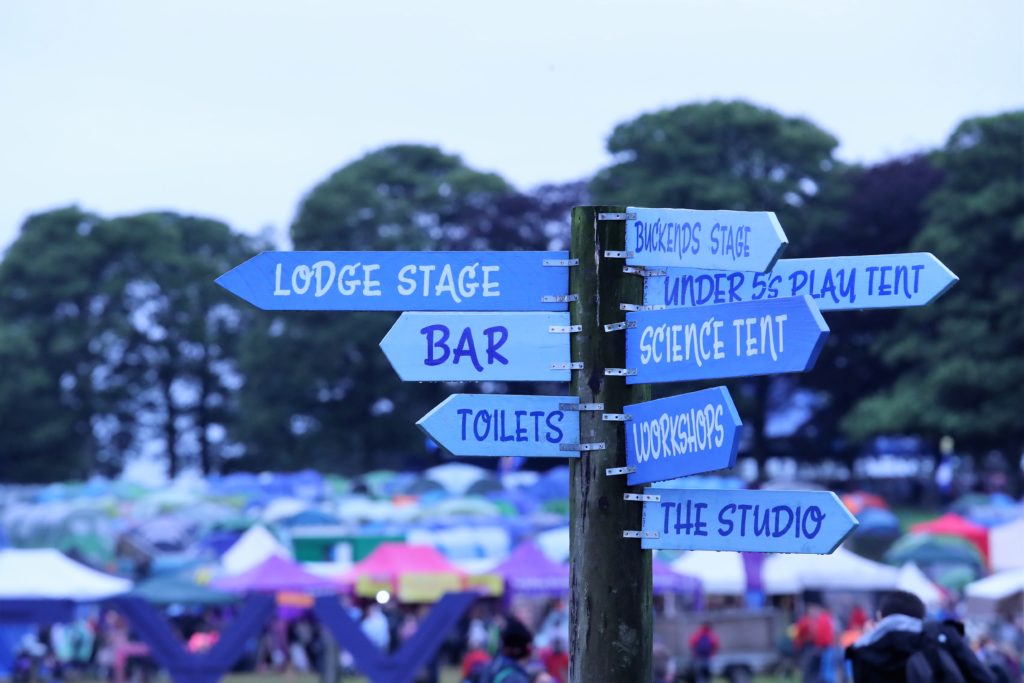 Since its inception as a one day festival back in 2010, Deer Shed has slowly evolved into what is now commonly regarded as being the UK’s premier family festival. And with this quiet evolution, Deer Shed’s programme of music has gradually diversified and developed into a wonderfully multi-cultural, genre-shifting schedule spread over four stages and catering for most discerning musical tastes.

Following them onto the In The Dock stage are Self Esteem and singer Rebecca Taylor is acutely aware of the sea of young faces in front of her and the fact that half of Deer Shed’s sell-out crowd are aged 16 years or under. She is faced with the dilemma of having to reduce the industrial-strength of some of her regular between-song-banter and thus run the risk of shaving about ten minutes off the length of her set. She makes up for any possible shortfall with a dynamic performance that is high on choreography and pre-Brexit European electro-pop. 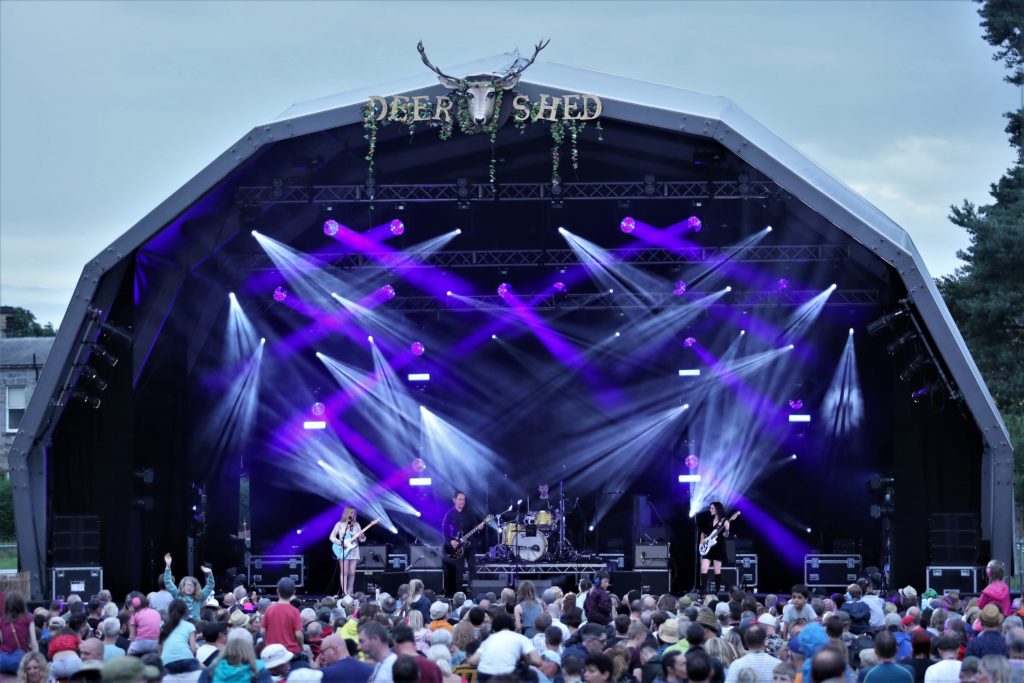 The In The Dock stage sits adjacent to the Ferris Wheel, Swing Ride and Helter Skelter at the top of the main arena. A gentle walk down the slope brings you to the Main Stage and the welcome return of the band that headlined the inaugural Deer Shed Festival. David Gedge may now be ten years older and wryly suggests that ‘Take Me!’ – an incredible, breathless version of the song that takes up a huge chunk of The Wedding Present’s set – “will be the death of me”, but as he leads them through their 1989 album Bizarro in its entirety and tosses in their new single for good measure you can see there is still plenty of creative life left in him and the band.

Some would rightly argue that The Wedding Present should have been headlining Friday night but that honour fell to Anna Calvi. And she does not disappoint. Mostly featuring material from last year’s The Hunter album, the cold emotional detachment of her on-stage persona is at striking odds with those songs’ intimate reflections on gender and sexuality and the frightening intensity of her guitar work. It is a thrilling performance of wild extremes. 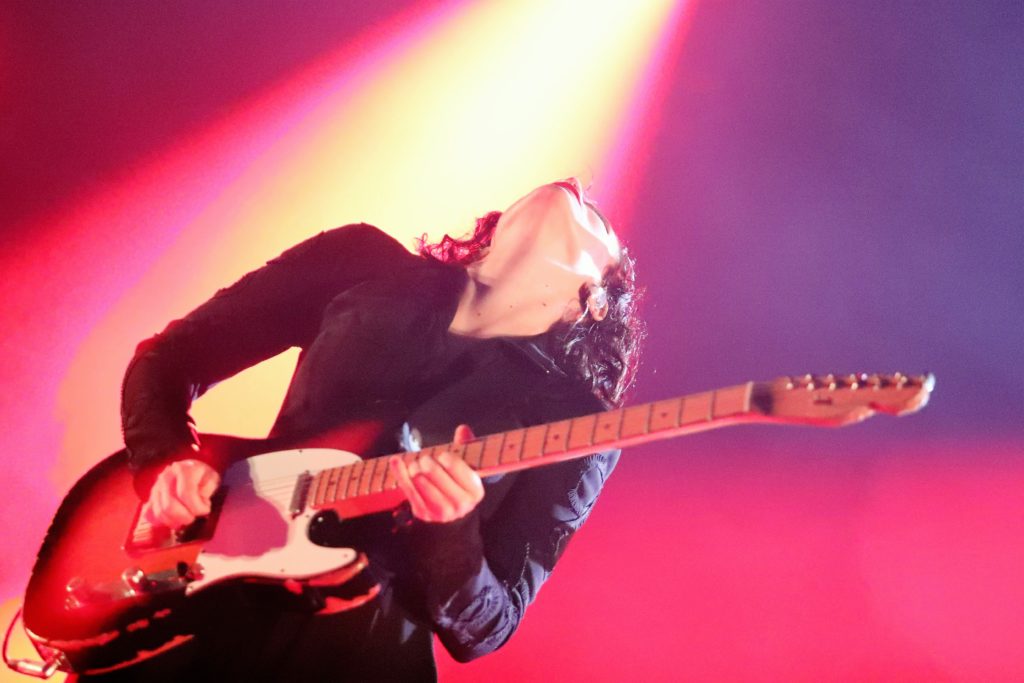 Friday night and Saturday morning bear the brunt of the heavy rainfall, so a good place to seek sanctuary over Saturday lunchtime is under the inviting canvas of the Lodge Stage. It also affords the chance to spend time in the most estimable musical company of Kathryn Joseph. Unlike Rebecca Taylor the night before, the Scots’ singer-songwriter isn’t so cautious about her use of language. She tells us that “most of these songs are about begging someone to love me and to fuck me again”. And, furthermore, she reassures us that the process actually works. Taken from her last album From When I Wake The Want Is, ‘Safe’ is “full of filthy language and not much of a laugh” and is all the better for it. Heart-warming stuff.

By contrast, and by playing in front of a crowd of youngsters in the adjoining Pallet Stage, fellow singer-songwriter Stephanie Knipe in the guise of Adult Mom feels entirely in her element. Her day job is that of a “teacher of small children” and her songs do contain a certain child-like innocence.

Tom Williams is unsure how many times he has played Deer Shed. “Maybe three or four?” he muses. Regardless of the number, it is good to have him back and his songs about graveyards, hurricanes and rainfall fit perfectly with the prevailing meteorological conditions. Our socks and pants may well be wet by now, but we heed his advice to “just dance” as he delivers a rousing set of heartfelt bonhomie.

Both the Redcar rapper Dylan Cartlidge and indie-poppers Piroshka – a so-called supergroup featuring former members of Lush, Elastica and Modern English – firmly embrace diversity and resolutely promote its inclusive message through their contrasting styles of music. Piroshka end their set with a cover of the Au Pairs ‘It’s Obvious’ with its noble refrain “you’re equal but different”. 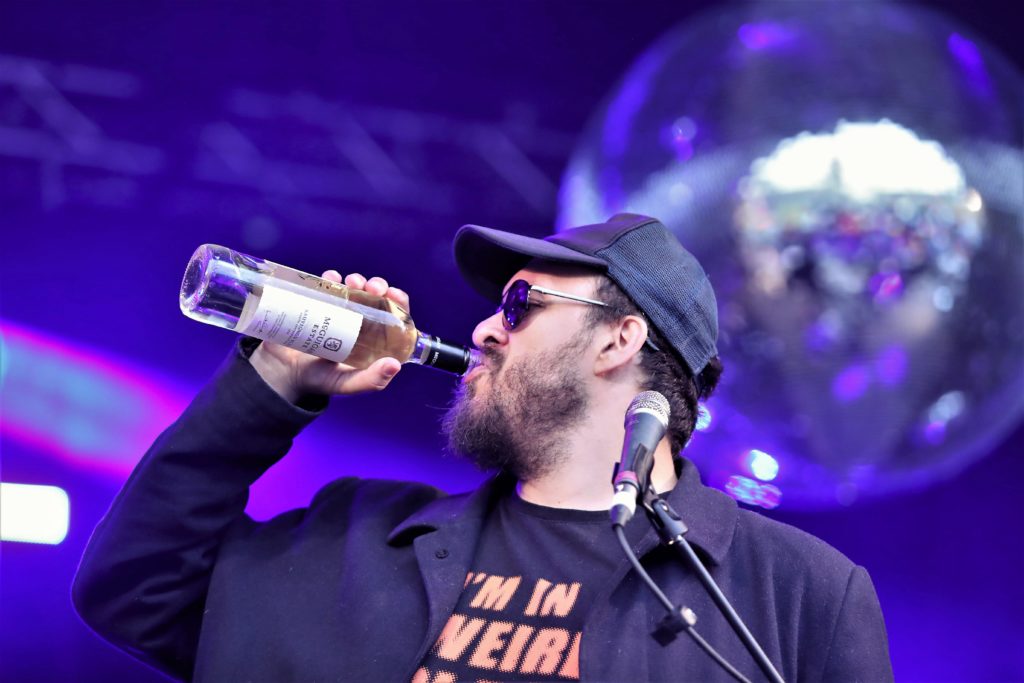 “Don’t drink, kids”, BC Camplight offers sage advice from the main stage as he steadily works his way through a bottle of McGuigan’s Sauvignon Blanc. It clearly doesn’t impact adversely on the American songwriter, multi-instrumentalist and former UK deportee Brian Christinzio’s performance as he stays true to his mid-set assertion “that it’s gonna get progressively more awesome”. ‘Midnight Ease’ and ‘Thieves In Antigua’, and what is probably the best song of the entire weekend, the beautifully moving ‘Just Because I Love You’ confirm BC’s remarkable prescience.

It is hard to believe that it is now five years since Charles Watson and Rebecca Taylor appeared as Slow Club on the old Lodge Stage (before the lay-out of the entire site was reconfigured last year). It is perhaps even more difficult to comprehend how divergent their musical paths have since become. For Watson’s part, though, he has stayed true to the key principles of melody and charm. ‘Abandoned Buick’ and ‘Everything Goes Right’ are notable highlights.

The rain saves its worst for Sunflower Bean’s performance but the New York trio (here augmented by Danny Ayala on keyboards and athletic bursts across the stage) merely shake their collective fist at the deluge with a sparkling, life-affirming show of defiance. An unexpected pleasure. 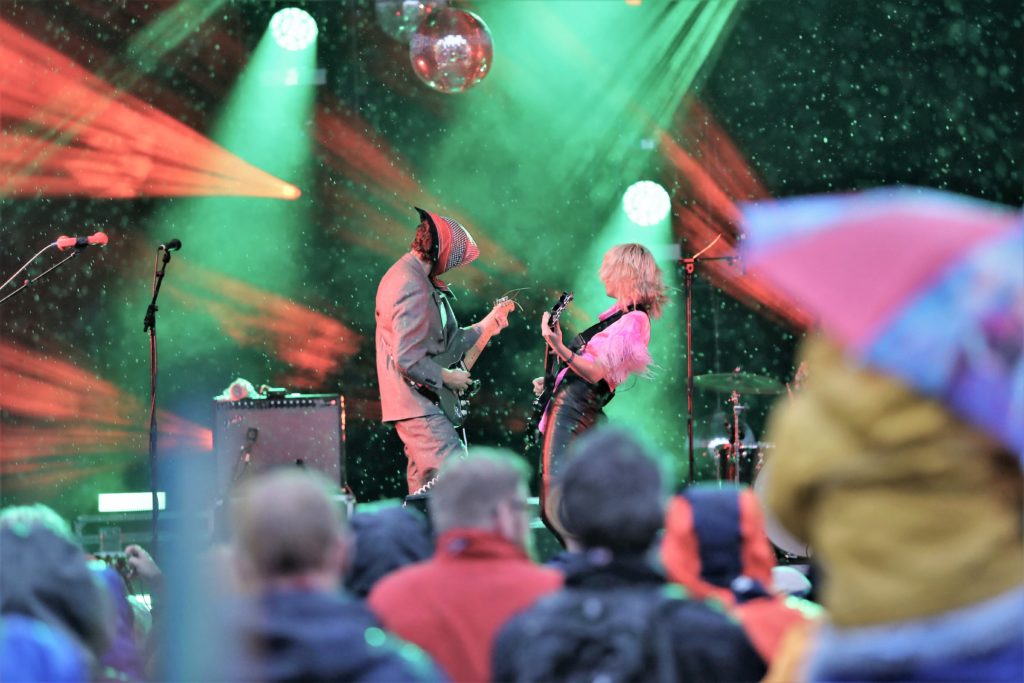 Following the unfortunate last-minute cancellation of Fontaines D.C. through illness Pigs Pigs Pigs Pigs Pigs Pigs Pigs find themselves elevated to top of the In The Dock shop on Saturday night and waste no time whatsoever in making their presence felt with a impenetrable sledgehammer of sound that welds together Black Sabbath heaviness and untrammelled psychedelic fuzz into one God almighty eardrum-perforating cauldron of noise.

Follow that Rolling Blackouts Coastal Fever, and they almost do. Evidencing Deer Shed’s ever-expanding geographical reach, the Aussie five-piece seem slightly overawed by their first ever festival headline slot and come bearing gifts. Extending the international hand of friendship, they hand out pints of beer to the audience before getting down to the more serious business of rocking our most immediate world. By the time they reach the home straight with ‘Fountains of Good Fortune’, ‘French Press’, ‘Cappuccino City’ and ‘Clean Slate’ they have affirmed Deer Shed’s decision to have them top their Saturday night bill.

The benefit of an excellent drainage system, tons of woodchip and straw and an army of enthusiastic volunteers ensures Baldersby Park does not turn into the trench foot-threatening quagmire one often associates with the very worst Worthy Farm experience. Like all of Deer Shed’s infrastructure it is a model of consistency, precision and excellent planning. 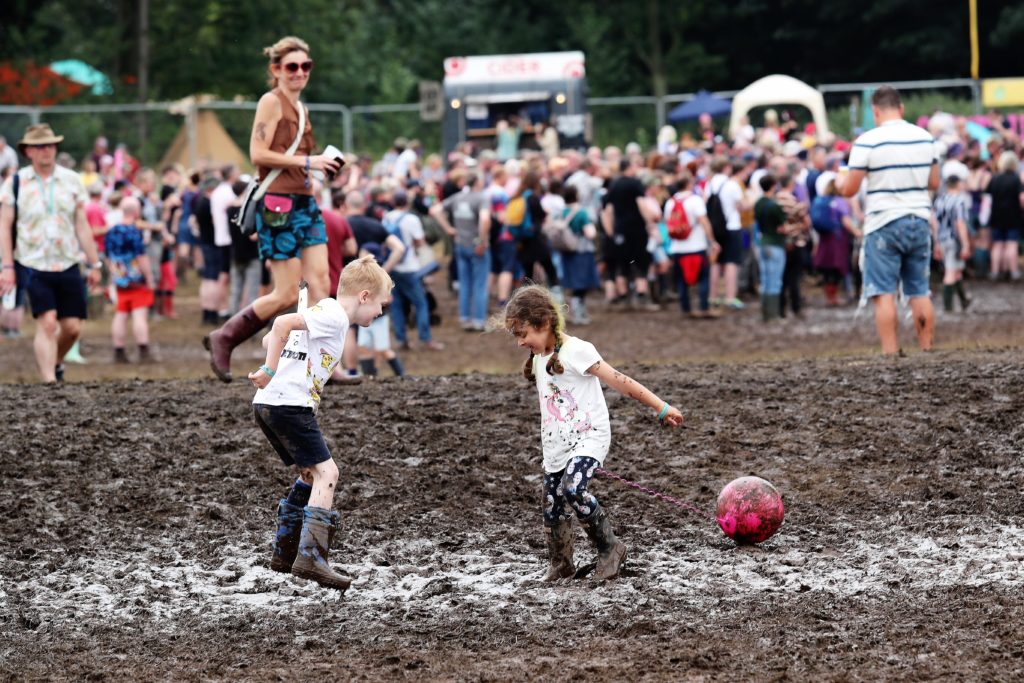 Like some long-lost friend come Sunday a pale sun peers from the skies. Living Body grasp this sign of warmth and optimism with a blissful demonstration of how best to marry organism with dramatic pop tunes. It is a trajectory followed first by the soulful narratives of London-based musician Laurel and then by the infectious propulsion of Pip Blom. With her sorrowful reflections on a disappearing world, Lisa O’Neill may hold the shade to this earlier light in the palm of her hand but ‘Blackbird’ and ‘No Train To Cavan’ are amogst two of the most moving songs to be heard all weekend.

Sunday night’s headliner Ezra Furman makes a late afternoon appearance on the Lodge Stage speaking to the South London comedian and writer Gabriel Ebulue as part of a Three Track Podcast. Furman’s first musical love may well have been Green Day but it was through listening to his parents’ copy of Bob Dylan’s Blonde on Blonde that he was inspired to start writing his own material. Both influences, alongside those of Lou Reed and The Ramones, can be heard in his transformative show later that evening. It is raw, rich, uncompromising stuff where the American musician expertly balances a certain contrariness on his part – he showcases a number of previously unheard songs from his forthcoming album Twelve Nudes – with genuine humility. It is a performance that is as conflicted as it is powerful. 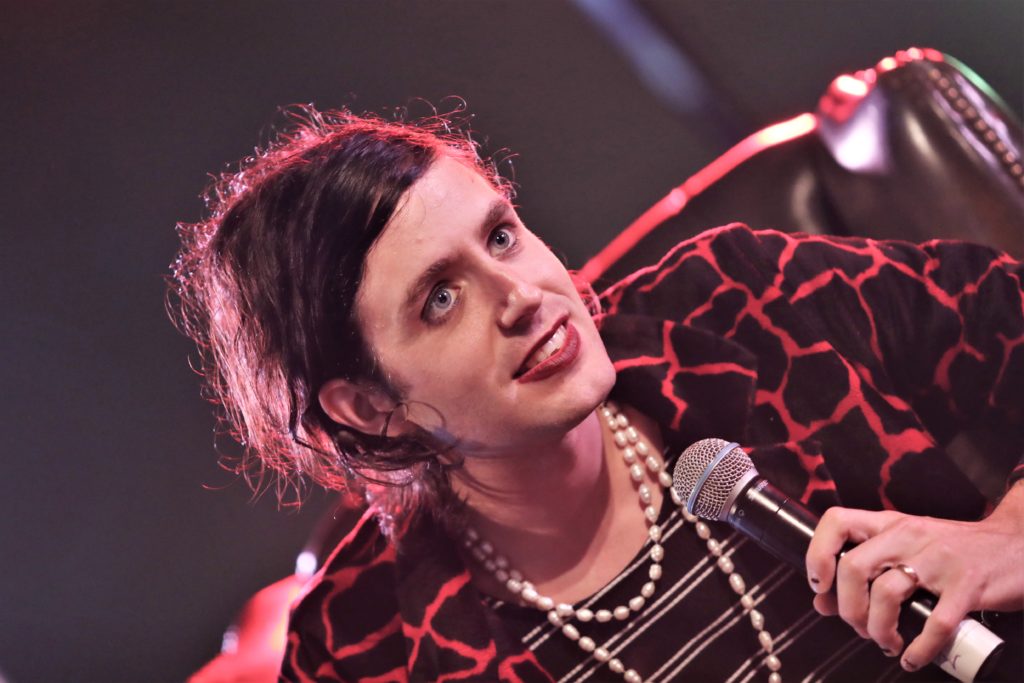 Before reaching that point, though, we enjoy one of those famous Deer Shed “runs” whereby one great set just follows after another. She Drew The Gun, whose frontwoman Louisa Roach had taken part in a fascinating panel discussion about The Vinyl Revival earlier in the day, set the wheels in motion with a typically visceral exercise in polemics and power, signing off with a cracking cover of The Beloved’s ‘Sweet Harmony’. Steve Mason always delivers. From ‘Planet Sizes’ to ‘Words In My Head’ his set is full of songs bursting with passion and skyscraper melodies. Like all of us he seems genuinely pleased to be back here again.

And then there is Akala. Another who had been busy earlier when talking to author Jeffrey Boakye in what was an outstanding, illuminating conversation that covered many topics from race and his growing up on an estate in Camden in London to immigration, empire and education, it confirmed the compassion and reason in the hip-hop artist’s voice. 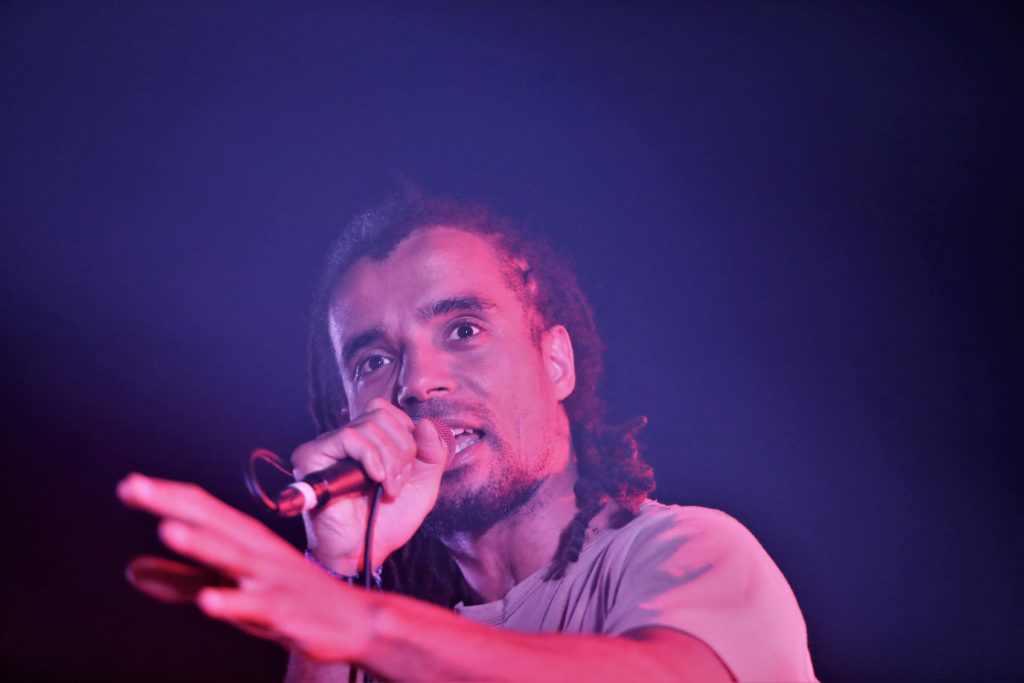 A similarly packed-out In The Dock stage then bears witness to an incredible performance from Akala, one that burns bright into the enveloping darkness of this particular North Yorkshire night. It serves as a perfect metaphor for just how far Deer Shed has travelled in its decade-long journey and with it a shared belief in its own vision and the realisation of a dream.

Deer Shed Festival 10 was held at Baldersby Park, Topcliffe, North Yorkshire, England between the 26th and 28th of July 2019.