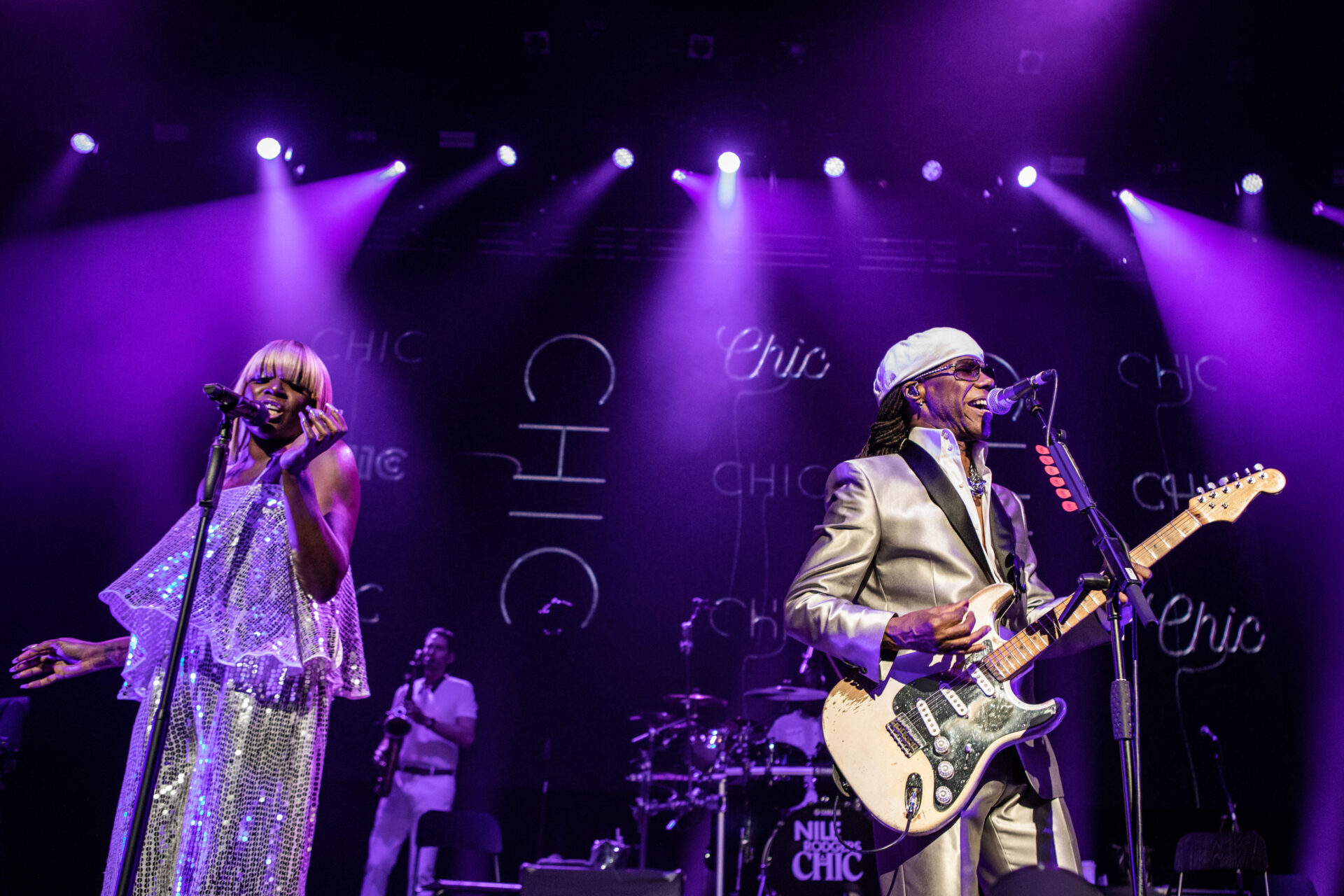 What is there left to say about multi-million selling disco king Nile Rodgers? More than you’d think, as it happens.

What’s more, the man behind Chic and countless other hits, from Madonna‘s ‘Like A Virgin’ to ‘Get Lucky’ by Daft Punk, is intent on saying it himself. Dispensing with a support band for the opening night of the Meltdown Festival he’s curated, Rodgers instead takes to the stage for what is billed as a Q&A session but proves to be more like a cross between a lecture and stand-up comedy.

We learn that the Rodgers had the idea for starting Chic after being stranded in London having had his passport stolen. “What do you call a musician without a girlfriend?” he asks the audience. “Homeless!” comes the reply, but luckily he had a girlfriend, and it was she who took him to see Roxy Music. With their couture clothing and chiselled good looks, he had never seen anything so sophisticated and immediately set about making his new band black music’s equivalent.

Displaying some pretty finely-honed skills as a raconteur, he tells about going on the lash with Billy Idol and meeting David Bowie for the first time, bonding over a mutual love of jazz. We learn that a night out with Miles Davis, of which he enjoyed quite a few, would inevitably wind up with Davis imploring him to pen him a “motherfucking ‘Good Times’ for me.” Wittily related encounters with Frank Sinatra, Quincy Jones, Daft Punk and even Barack Obama, among many, many others, make for a fascinating and revealing hour, with an airing of a previously unheard first recording of ‘Let’s Dance’, complete with a triumphant Bowie declaring “got it!” at the end, being the true jewel in the crown.

As well as being thoroughly entertaining and very funny, this preamble proves invaluable, because it shines new light on what is essentially the most familiar portfolio of pop tunes since The Beatles. Nile Rodgers love of jazz infects every corner of his songbook, but in the subtlest of ways. He’s a guitar hero, certainly, but doesn’t waste his time playing endless solos. His language is more about throwing improbable, endlessly inventive shapes on the fretboard, those chords adding that extra dimension to addictive ear candy like ‘Upside Down’, ‘We Are Family’, ‘Lost In Music’ or ‘My Forbidden Lover’,

Having also declared that genre labels like funk or disco were irrelevant, simply seeing his output as part of the ongoing history of soul music, it’s surprising how he can mix and match tracks from five different decades and make them sound like one single fluid river of creativity. Although a tsunami might be a more appropriate metaphor, as the torrent of classics that emerged from his pen simply steamrollers all resistance.

Not that anyone has any intention of putting up any resistance. The audience, spanning numerous generations and complexions and united mainly in their glammed up, glittered appearance, is up on its feet from the moment he and his eight string band of singers and musicians hit their first note. By the time they bid farewell with a version of ‘Good Times’ that borrows back from the first ever hip-hop hit that sampled it, Sugarhill Mob‘s ‘Rapper’s Delight’, the collective smiles are wide, even if our feet are sore from the non-stop dancing.

As is a longstanding tradition at his shows, Rodgers invites a throng of dancers to join the fun onstage for this last moment. Somewhere among them, he tells us, is Dave Stewart of Eurythmics fame.

But tellingly, with one eye always on the future, it’s a young chap who can only be eight or nine years old who Rodgers ushers to the front of the stage to show off his moves. It’s one of those spontaneous moments that ends up speaking volumes. You can bet that when this young man reaches Rodgers’ age – a very youthful 66 – then he’ll still be dining out on the story.