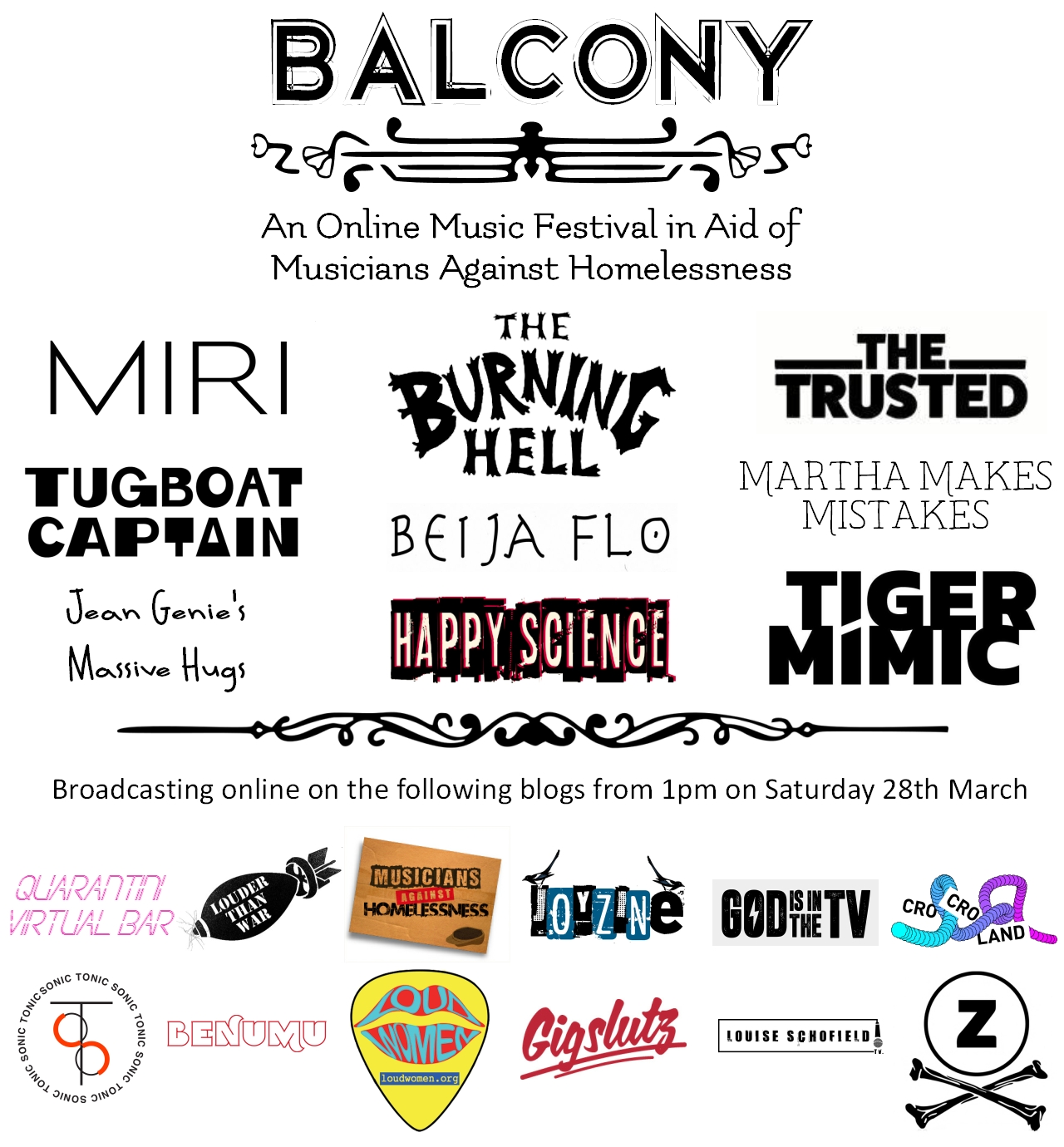 Balcony is an online music festival taking place this weekend in aid of Musicians Against Homelessness. The live streaming show starts today from 1pm, its free to view below and via a number of established independent UK blogs (including us) who have collaborated to create this event. Viewers are encouraged to make a donation to the charity if they can afford to do so. You can donate on this link: http://tiny.cc/14zvlz

Balcony Online Music Festival is named in tribute to the Italian musicians who have been singing from their windows through their Coronavirus lockdown.

Joyzine stage:
Ariel Sharratt + Mathias Kom (The Burning Hell): https://www.wearetheburninghell.com/
Sharratt and Kom are best known as part of the Canadian garage-folk band The Burning Hell, which for the better part of a decade has been attracting a cult following in Europe and North America to their literate, darkly humorous songs and dynamic live shows. In 2016 Sharratt and Kom took a break from the band to release their first duo record, Don’t Believe The Hyperreal, which nodded to the classic musical duets of the 1960s and showcased a more intimate side of their songwriting and performance, including the underground hit “Fuck The Government, I Love You.” New album Never Work twists the sweetness and charm of duets into new shapes, moving away from romance to self-reflexively and sometimes caustically examine their own labour as musicians and the crumbling system of work and capital that continues to shape us all even as it abandons us.

Benumu Stage
The Trusted: www.thetrusted.co.uk
Possessing an irresistible charm, an undeniable wit, and an infectious personality shining through their adventurous brand of youthful punked-up indie rock, The Trusted are both a refreshing tonic, and a barrage of fireworks rolled into one. Seamlessly switching from mellow, artfully constructed melodic thoughtfulness into wild, explosive moments of raucous brilliance, there’s a surprise around every corner within The Trusted’s music and songwriting, all executed with an undeniable measure of passion and grit.

God Is In The TV Zine:
Tugboat Captain: https://tugboatcaptain.bandcamp.com
London DIY indie pop quartet. A 4-piece crew of friends and family – recording, rehearsing and releasing music out of a terraced house in South London. The band have spent the last year gathering attention across the DIY Pop community through their relentless touring, homemade videos and bittersweet pop songs. Variously compared to Belle and Sebastian and The Wave Pictures, the band have garnered a reputation for their riotous live shows – frequently combining bassoons and nudity. Since forming, the band have released a pair of records, the latter ‘Everybody Seems To Think That I’m A Raincloud’, being awarded No7 Album of the Year by For The Rabbits and featuring Reddit endorsed single ‘Don’t Want To Wake Up On My Own’. In spite of the total DIY attitude the band have managed to accumulate over 700,000 streams on their Spotify, significant international radio play and a feature on Netflix Original series Terrace House. Their most recent single ‘Be Strong, Smoke Less’ took the band across the UK on their biggest tour yet. The band are currently working in Abbey Road, finishing work on their 3rd LP.

Sonic Tonic stage:
Beija Flo: https://soundcloud.com/iambeijaflo
From a lovely room in a horrible house somewhere between Watford gap and the Land of Oz, Beija Flo is a calm kind of frenzy, fashioning songs for doomed lovers and don’t know why’s.

With bitter lust, the love lost, dream boat lah-di-dah in a jam jar. Tearjerker and easy to talk to. Naturally, Beija Flo.

TIGER MIMIC: www.tigermimic.com
TIGER MIMIC is a London based band with a sound that ranges from bitcrushed anthems to sinister bass grooves to rapid-fire rock poetry and more.

The Zine stage:
Jean Genie’s Massive Hugs: https://soundcloud.com/jeangeniesmassivehugs
Jean Genie Graham is a singer song writer who is well known for her MASSIVE HUGS and for promoting acts via her radio shows and ‘Panda Power!’ live events. Often accompanied live and on record by Lee Ho San 李 湖 山 (Violin/piano) & Jonny Haze (bass); a mixture of folk indie, blues, rock and dream inspired music, all of her original songs vary in energy and mood, captivating listeners and whisking them away, whilst spinning her stories in song.

> THE CHARITY: www.musiciansagainsthomelessness.net
Musicians Against Homelessness put on 100s of gigs & festivals across the UK. We source opportunities and spaces for up-coming talent to play and raise money for homelessness services.

Watch the festival online at any of these sites: