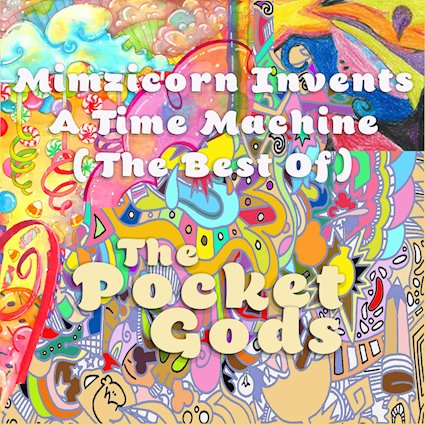 Cult indie artist Mark Christopher Lee and his much-lauded band The Pocket Gods have found that the time is now suitable that they release their Very Best Of collection. Well, amid this current pandemic where the entire world is broken, it seems an entirely fitting time to do so. Founded in 1998 by lead singer/songwriter Lee, although lineups have changed frequently, they have been able to release copious albums during this time. The band was discovered by the late, great John Peel in 2004 and are now championed by 6Music’s Tom Robinson – this relationship now continuing between the broadcaster & band, bringing the ‘slightly sublime’ to the ears of the nation. Describing The Pocket Gods would have to be lo-fi indie, although dipping their toes into electro-funk and psychedelic-pop along the way, you do have to drink from this cup to fully appreciate its sonic capabilities. The band was even namechecked in Peel’s biography Margrave Of The Marshes.

The collection includes ‘Black Friday On Oak Island‘, a joyous romp in a consumerist idyll where Lee’s imagination is left to run riot, as the lyrics run “…it’s Black Friday, it’s my fun day…“. I can see him shopping ‘virtually‘ during this recent import from the US economy, or could it be he is referring to “the so-called curse which haunts Oak Island in Nova Scotia?” Something which is the subject of The Pocket Gods’ 2015 concept album, of the same name. This is where Lee’s genius comes in, as no sooner are we seeking to reflect on this, than the song ends, at 2’49”, and we’re onto the next number. 67 albums and it’s the honesty in which the songwriter is approaching each refreshing track, as we are asked to “…cherish your friends, cherish your family…” in the second number ‘Celebrate‘, a song which comprises a naivety that is like drinking a glass of the purest spring water.

What’s so great about this collection is that over the 20 years that Mark’s Pocket Gods have been in operation it feels like we the listener are meeting those he has encountered along the way, and when he references these people in his songs, it’s the affection with which he sings about them. In ‘Billy Childish Enters The Space Race‘, he places this English multiple disciplinary artist, author and musician, into a situation that screams BRILLIANT and is certainly out-there. This “wistful maverick’, calls on his friendship with broadcasting-legend Howard Hughes (not to be confused with the reclusive eccentic of the same name, but this time the Hughes famed for his “unexplained podcast“), who offers guest narration during the album and is someone who has featured on the band’s albums in the past. These numbers are uncluttered in their approach and the author is forward in speaking his message. Having been affected by depression and mental health issues since he was a child, something which culminated in Lee taking an overdose last year, this has now found him more determined than ever to encourage others to seek help.

I’m reminded of bands like Shonen Knife in that these songs are short and sharp and when they are not tackling harder issues like depression and mental health, they primarily set out to entertain. This is done in the lowest Lo-Fi, taking the every day and putting it on the front page. ‘Tuesday Night Socialist Club‘ is taking real life by the throat and waving its flag from the mast. But what is stranger, is when a number full of punk attitude, like ‘Jombal Party‘, is found rubbing shoulders with the likes of ‘Bermudarectangular‘, where sounds look the 22nd century in the eye and take Sci-Fi by its undercarriage, producing something that is musically quite beautiful. This plays alongside clips found within ‘public service broadcasting‘ sources, asking questions and raising the bpm at the same time. Although perhaps never destined to be at the forefront of music, it’s artists such as Lee that encourage others to experiment, passing the baton to the next and promoting this art form we all love. And who’s to say that these might be the next genre-defining sound. M.C. Lee, you’ve got to love him.