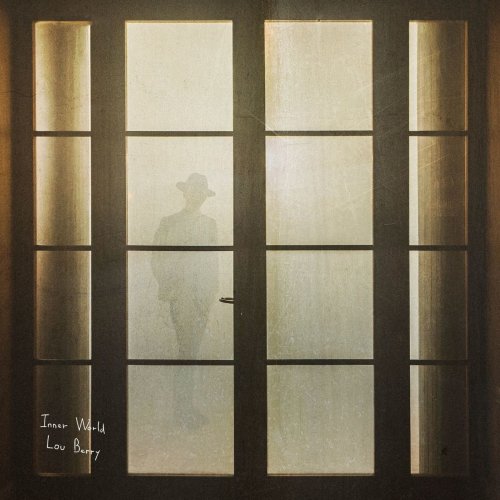 Looking at the cover of Lou Berry’s debut album Inner World, it’s hard to get a handle on what you are about to play. The cover is of some French doors, a nice visual joke given he is currently based in Paris. The camera is outside pointing at them. We can tell this as the curtains are inside. Reflected on the glass is a man in a suit and fedora or he is standing inside the room. As the title of the album is Inner World we can assume that he is inside the room. The album is also about looking for answers inside yourself rather than looking out. But looking at the cover, Berry doesn’t give a lot away about what we are about to experience, apart from everything is muted and there is a feeling of serenity about it.

Berry has crafted 14 songs laced with introspection. His vocals never get above a whisper and the music purrs with understatement. When the songs change you know there is a reason and he’s building to something. The standout tracks on the album are ‘Dreamers’ and ‘Willingness’. ‘Dreamers’ features Gracy Hopkins and LYNN. The song is slightly more hard hitting, which makes a nice change in tempo and texture, but it’s the addition of different voices that really raises it from the others. ‘Willingness’ feels like Berry’s taken Radiohead’s classic single ‘Pyramid Song’, but for a late night, blissed out generation. It glides effortlessly out of the speakers and swishes around making its point, but not outstaying its welcome.

Inner World is the perfect antidote to a harsh day. There is nothing jarring or unpleasant about it. Berry has created 14 songs that fit in a Venn-Diagram featuring Hip-Hop, Pop, Soul, Jazz, crooners and chillout. The songs sound great and the tones are like a warm duvet. Comfy and familiar. The downside to the album is that there is no real bite to any of the songs. It all just meanders along at level clip. Unchanging. Yes, some songs feature guest spots. ‘Dreamers’, as previously mentioned, features Hopkins and LYNN. Their inclusion elevates the album and gives you something different to latch in to. When Eylia appears on ‘Mary’s Lies’ and ‘Runaway’ it feels like an event, but when it is just Berry, the songs never get out of second gear.

Just to clarify, Inner World isn’t a bad album. Far from it. The songs are expertly written and have an aching melancholy to them that is endearing. There is also a massive dollop of hope throughout. Which is much needed at the moment. At times you get the feeling that Berry is putting his arm around our shoulders at the end of an evening of particularly honest conversations at the pub. He’s holding us steady whilst saying “It’ll be ok. You’ll see. You’ll bounce back from this” or “Things aren’t as bad as you think”, but what makes Inner World disappointing is how safe it is. If Berry had tried something a bit riskier on a few tracks, odd time signatures, contrasting guitar tones, or raspy drums it would have given the album some extra texture. Something to shake us up from the tranquillity. I know that everything doesn’t have to be challenging or edgy. That it’s nice to be listening to something soothing, and a lot of people like music that doesn’t give them a headache or sound like a washing machine slowly breaking down, but at times this is a tad too safe. Which feels worse than if it had been a bad album.