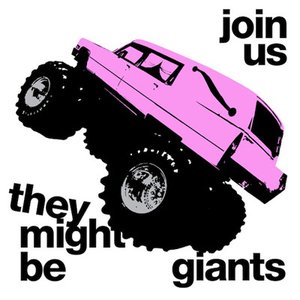 Heralded, as a return to form, ‘Join Us’, is the bands first so-called, “grown-ups” LP for years: a move away from their more child-friendly, ‘Malcolm In The Middle’ excursions.

Lighting up the alternative American rock scene over 20 years ago, They Might Be Giants’ satirical and garrulously humoured songs never quite took off, after the release of their platinum selling third album, ‘Flood’, and the charmingly eloquent presiding single, Birdhouse In Your Soul – a template they continued to use but never improved upon.

But now they’re back with a lavish monumental sized 18-track album that capriciously flits from one genre to the next, taking in vaudeville, Zager & Evans In The Year 2525 futurism, the left banke, and RKO shtick. The usual merriment and whimsy is still in evidence, with a rich plateau of Gilmore Girl and collage style wordplay, resplendent with omnivorous random references and geektastic wit on the full package of human emotions.

Musically speaking, they’ve absorbed a whole host of influences, or rather they now sound a lot like the bands they once influenced: in fact bands such as Weezer, Green Day – pre-American Idiot – and, even, Wheatus all spring to mind when listening to the leading single, Can’t Keep Johnny Down, a more-then-friendly radio summer pop song that has a sinister touch.

On both the synth driven, proto-Moroder disco tracks, Celebration, and, Never Knew Love, they channel Sparks, whilst they impersonate Jack White on the mariachi, MGM back-lot-tour whiz-through, In Fact.

‘Join Us’ seems to be in a great hurry all the way through, dashing from one idea to the next; hurtling through a pastiche of every conceivable musical style (Eminem rap, CSS grooving Brazilian electro and Tom Petty are all in evidence). All this schizoid frippery can soon become tiring – and though I can appreciate their generous spirit in releasing so many tracks on one LP – it could do with far fewer.

There are enough songs and vignettes to amuse, entertain and evoke emotion on TMBG 15th studio album to please fans, and casual interlopers alike, even if they don’t quite match the originality of their debut album, all those many years ago.

4 thoughts on “They Might Be Giants – Join Us (Idlewild)”