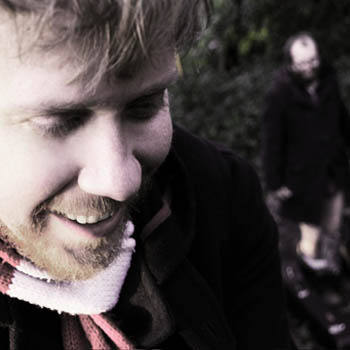 After over a decade of highly-acclaimed yearly shows, and much speculation as to why no recordings have ever been made available to the public for purchase, Daniel Kitson’s first ever commercial release is finally here.   A collaboration (their first in fact) with his friend, the West Country songwriter Gavin Osborn, dating from 2007. The charm of each, as well as their attention to would-be-overlooked details, leads the narrative down unknown avenues and unexpected alleyways.   The story and songs swim through and echo one another – we are shown moments in both where everything changes, Kitson uses the date August 13th in the story segment following Osborn’s song, Greyhound – Friday July the 3rd, and other such lovely touches.  Kitson, as is his command of language and emotion, takes a momentary, mundane annoyance – the possibility that a stranger might attempt to talk to you on a long train journey – and brings it into the realm of the magical, “the greatest love story ever told”, sometimes crossing into fairy tale territory.  Full of pleasing alliterations and a robust, rippling rhythm, this story sparkles with luminous love, clandestine activity, and ridiculous violence.  It’s one of Kitson’s heartfelt story shows rather than his stand-up, of which he’s the best in the business, but there are still incredibly funny moments within.  And one thinks, not for the first time, how well these pieces would work as prose to be read as well as listened to.

Osborn’s songs are musically reminiscent of Australian indie-poppers The Lucksmiths and the better classic Lemonheads songs, though lyrically something else entirely.  For these five songs are also a story; filled with Gavin’s own idiosyncratic, romantic worldview. They depict scenes from a youthful romance ranging from cute teenage shyness and embarrassment to the tragic sense of loss and impotent fury when one realizes one’s beloved is going to be with someone else.  In between there’s the lovely The Sketch, demonstrating the power of art to offer more revelations than you might be prepared for, and the highlight of the set, the wistful The Notion Of Lighthouse Keepers, which also beautifully ties in to Kitson’s half of the story.

At a recent preview of his new show, Where Once Was Wonder, Kitson set the record straight about why he’s never released a record or DVD before. Stating that he didn’t trust other people enough to do it properly and he couldn’t be arsed to do it himself, he therefore put to rest all rumours of “grand statements of artistic purity” and the like.  The Ballad Of Roger And Grace is available for £2.50 at Kitson’s Bandcamp page (the first three sections can be heard for free before you decide to buy it), where he has also put up two old stand-up shows from 2004 and 2005.  Both shows were recorded at The Stand during his Edinburgh runs and are available for free until the free downloads run out, after that he’s asking 40p.  All are worth the price many times over.