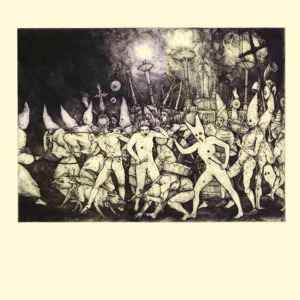 It could be argued that Joe Murphy’s opprobrious poetic London troupe, Sergeant Buzfuz, were not just repeating what’s already been written about the potted profligacy-ridden history of the Popes, but that they were also adding a nice musical score to the salacious misdeeds of the early Catholic Church – of which there are a gluttonous bounty. Though its been said that you can’t judge the past by today’s standards, you’d have a hard job justifying or explaining the actions of such supposedly venerable cast upholders as they were of the faith.

Not so much a pious barbed or slanderous assault as an Antifolk ‘Horrible Histories’ complete with the miasma stench of bestiality, incest and prostitution, this concept album, ‘Go To The Devil And Shake Yourself’, is actually quite an entertaining and informative experience.

Murphy rolls out an ever-flowing garrulous abundance of lyrics in the style of a rambling augur fronting The Fall – or even Earl Brutus – delivering his lecture-fashion renditions with a certain syllable-stretching gusto. The roll call of misdemeanours is relentless, overbearing in a way, and difficult to take in one large dose; though you should at least attempt it.

Broken down into two greater acts, the album is divided between the introductory and recurring Here Comes The Popes entitled mantras first half, and the more experimentally, Factory Records imbued, “schism” second. The inaugural refrain of that Here come the Popes Part 1 sets off on an indolent folksy lamentable essay of perfidious behaviour, followed by a succession of equally miscreant spotlighted studies, strung together with a sad leitmotif signature.

Parts 2 & 3 is counterbalanced with a moody Northern burred vocal and shadowing violin intro, and a more kicking Dexy’s Midnight Runners fiddle playing skat finale. We’re taken through the story of Pope John XII – “Pope John XII kept two thousand horses, fed them wine/ The holy Emperor heard other rumours and had him tried/ Accused of gambling, adultery, murder and incest” – his sons (oh yes, being Pope wasn’t a barrier for knocking out kids, though most were illegitimate), their successors, including the 12-year old Benedict IX and Gregory The Dwarf (of the poisoned variety as it turned out). In just one song Murphy wraps-up a quota of hypocrisies; showing us just why the famous Dante looked back upon this epoch for his own ‘Inferno’.

Part 4 brings us a whole new host of characters, every bit as debauched and nasty as the rest. Name-checking the blushing sexual predilections of Anacletus II – “…liked to rape Nuns/ His sister was the mother of some of his sons” – and the genocide meted-out towards the mysterious Gathers, our voracious troubadour’s spit is lent a Happy Mondays early 90s swagger.

A brief instrumental interlude, Theme 3, allows a measured collective pause before act 2’s curtain call, the play-on-words Sur Le Pontiff D’Avignon saunters on in with its Gaelic waltzing and Jacques Brel-knowing pastiches. Taken, in part, from the old traditional Sur Le Pont D’Avignon paean, Murphy’s own take continues the threaded narrative, as Clement V moves the papal court from Rome to the French provinces – an action that kick-started the whole triple-titled Popes split within the church; the fuel for the next half of the album.

Act 2, ‘The Schism’, lifts-off with the harmonious folksy jaunt of Two Popes; a chronicling of the churches fragmentation into two opposing camps, with Urban VI and Clement VII both, “…excommunicating each other”. Musically the atmosphere starts to change, the Buzfuz moving towards an, often, unsettling post-punk influence.

Palais Des Papes Deserted echoes the titles abandoned residence – built in 1252, it became the Popes seat in 1309 but was finally ditched in 1377 – with haunting bar-room piano and reverberating hammered dulcimer backing, you could be mistaken for believing this banshee crying ode was recorded in a crypt. Echo-unit guitar pumps out a proto-dub rhythm on Hole In The Wall; sliding languidly into a full-on Mark E Smith soliloquy and the Raincoats misadventure on the following hooting, yelping Gregory XII Vs Benedict XIII.

The last stretch of this epic tune winds down lyrically; Benefictus The Fake an intriguing flash of playful nickname calling only registers a few lines, and Unholy Trinity– the almost final word – reiterates the repeating, “…excommunicating each other” line.

The Council Of Pisa interrupts the two slowly building from an obscured hazy, buzzing, flickering beat into a quasi-funk bassline skulking PiL and stomp. Murphy’s voice floats on the sustain, ridiculing “the holy trinity” of Alexander, Benedict and Gregory, who all claim themselves Popes; explaining the Pisa’s far from ideal solution: “A council in Pisa gave the word/ They condemned both Popes and elected a third”.

As a parting-shot – or as Murphy puts it “it’s a kind of coda if you will” – the last rallying campfire jig, Go To The Devil And Shake Yourself, is a sing-along hurrah malediction on the corrupts redemption; “When your chin and fingers drip with sauce, and oysters are served with every course/ And your name is a stain on the lips of the unborn/ And your drinking from some animals horn/ Go to the devil and shake yourself.’

A befitting end to an ambitious project that brings to life the ghosts and ill-gotten skeletons of a megalomaniac indulged religious empire. 1400-years of misadventure and greed – oh and complete disregard for the message at the heart of Christianity – is enacted in song. Here’s to the next chapter, the 600-year period that brings us bang-up-to-date with the now.