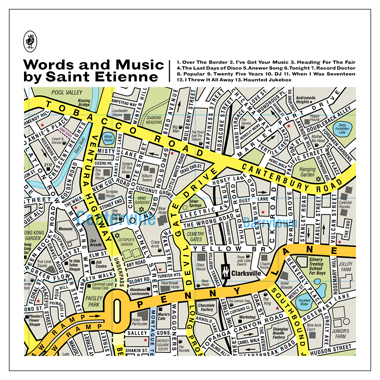 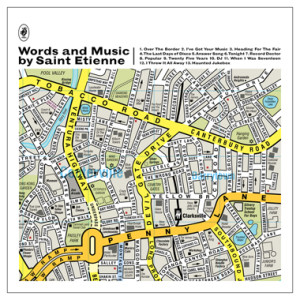 With three Best Of compilations in the new millennium – Smash The System (2001), Travel Edition (2004), London Conversations (2009), and let’s not forget there was 1995’s Too Tough To Die – a definitive idea of Saint Etienne has emerged.  The reissues of all their studio albums in the past few years, complete with bonus discs of relevant (largely unheard) material, has strengthened this notion whilst at the same time reminding us that the band have always worked with a wide palette, reveling in their eclecticism, though continuously remaining one of the best Pop bands of all time.  We understood what they were doing, no matter what it was.  Aberrations such as 2000’s minimalistic Sound Of Water and the underrated darker electro Finisterre were still routes along the same motorway.  Words And Music By Saint Etienne is another avenue entirely.  An excellent record, with a terrific title, but strikingly different, even for a band known for diversity.  Lest there’s any confusion, it’s still very much POP!

The first half of the album offers fantastic pop song after fantastic pop song.  The theme of the record – great music and what it means to us – is glorified in great music.  Opener Over The Border shows this in spades.  Almost all the best songs blend joy and sadness within one another and this chorus certainly does too.  After a spoken word verse in which Sarah relates how growing up and music were intrinsically tied together and how exciting and important that was, the beautiful “Love is here” of the chorus is mixed with knowledge of “growing older” and an uncertain future.  Not the only example of synthesizing on the record, and that all-important instrument is mentioned by name here and on Tonight, an integral component of the classic Saint Etienne sound on fine display throughout. I’ve Got Your Music is early Madonna-esque electro, further into club anthem territory than usual but hoisting their flag high as they easily conquer it.  Heading For The Fair is gorgeous.  The opening atmosphere evokes a dark distance with darker promises at its end and as the song opens up, one sinks smoothly into the chorus and beyond, where you can lose yourself completely spinning amongst shadowy sensations.  Last Days Of Disco is exquisite, Saint Etienne at their glitterball best and one of their greatest songs.  Sparkling and sultry, it’s “let’s dance” is an enticement not to be resisted. First single Tonight is a wonderful evocation of Music’s magic, the “Oo-oo-oo-oo” of the pre-chorus is one of those beautiful Pop moments that send a rush through your very being.  Answer Song is the most like the Saint Etienne we’re familiar with and an obvious highlight.  It gets better and better with each new section, when you don’t even need it to.  A neverending wave of lushness, a smile that keeps stretching skyward, it really is impossibly good.

The lovely a cappella vocal harmonies of the slightly humorous, 52 seconds long, Record Doctor seems to divide the album in half.  There’s not a bad song on here but past this point it’s not quite as strong.  Nevertheless, one can’t help but dance to DJ (previewed at their 2010 Xmas gig at The Forum, even then pointing to this new direction and seeming out of place next to their older material) with its HUGE chorus and enthusiastic propulsion.  In fact, it’s a triumph of this record how much it makes one want to not only dance, but be completely immersed in what the speakers are sending out.  When I Was 17 keeps up that atmosphere, pulling off the impressive combination of reminiscence whilst still capturing the feel of youth, the vocal melody taking you to all the right places.  Haunted Jukebox is a perfect closer for the album.  Calling to mind Dutch TV and other of the finer album tracks from Good Humor, it brings together much of what was great about their past whilst striding confidently into the future.  The warm breeze of its chorus sends the magic right through and you know, as with many moments on this record, just how wondrous music can be.