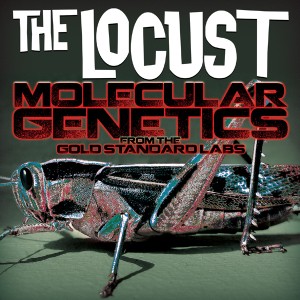 For a band who dress like locusts onstage, whose average song length is under a minute and have song titles such as ‘Priest With the Sexual Transmit‘, it’s hard to understand who may have brought forward the idea of an almost b-side album; the band, or their record label.

Regardless of music ethics though, ‘Molecular Genetics From the Gold Standard Labs’ and its forty four tracks tread through what The Locust fans will have come to expect with classics such as my personal favourite, ‘The Half-Eaten Sausage Would Like To See You In His Office‘. For those uninitiated listeners, I can only issue a warning for anything The Locust do. Listening to The Locust is like watching a sex scene with your parents, or walking into your parents room when they are having sex, or being the best man in a wedding where the bride doesn’t turn up. It’s an uncomfortable and abrasive attack on what your ears assume music should be. Awkward time and tempo changes, nonsensical yelps, frantic drumming, and for the most part, completely bizarre electronic use make The Locust a strange listen, even for a person like me who has already heard them a million times. But that’s where I actually think The Locust are brilliant, get beyond the quirky costumes, the satirical and often sexual song titles and what you find is an intelligent band, who may not be to everyone’s taste but are doing something that no other band is willing to risk right now.

If you aren’t a The Locust fan already, buy at your peril.