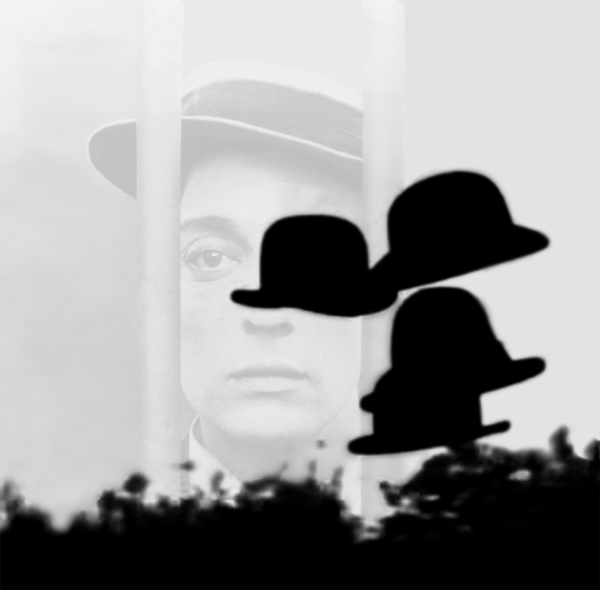 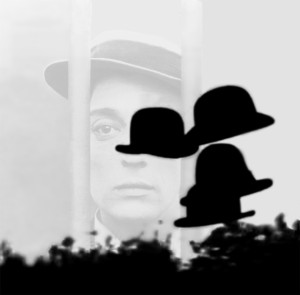 Early slapstick comedy is placed upon the Freudian couch in the experimental audiovisual collage collaboration of People Like Us & Ergo Phizmiz. The multi-faceted duo explores the relationship between Surrealism and Vaudeville on the silver screen, from the silent age to the burgeoning arrival of the “talkies”.

This juxtaposed performance of whimsical, endearing, avant-garde music and split screen imagery – Luis Buñuel’s metaphorical-stacked film tableaus sit side-by-side with the japes and stunt of many a comedic legend, and somehow seem intrinsically entwined – was originally premiered at the Berwick Film And Art Festival in 2010.  If you missed it first time around, pine no more as the sample-based US label Illegal Art is set to release the full suite on DVD next month (October 2012).

Summed up perfectly by the image of Salvador Dali, sketchpad in hand, capturing Harpo Marx’s pained attempts to play a barbed wire-stringed harp; both icons of their particular aesthetic reflect the conjuncture and influence that these two madcap styles had on each other. Though brief, the American novelist Thomas Pynchon best explained why the Surrealist movement was so enamoured by the prospect of film when he wrote, “One could combine inside the same frame elements not normally found together to produce illogical and startling effects.”

A kindred spirit of lunacy was found within the flamboyant gestures – left over from the show halls and theatre of the last century – performed by the Marx Brothers, Laurel & Hardy and Buster Keaton.  Integrating these two forms produces a third, more telling, story of symbolism and progression in a place where, “dreams” are, “mixed with reality.”

Not so much a linear narrative, The Keystone Cut Ups follows an odd sequence of semiotic events that no matter how bizarre have a suitable beginning and end, starting with the fairground and childlike cacophony ‘Orchestra’.  Triggered by Chico Marx’s impatient command of “now!” to an exasperated conductor, this curious fusion of concertinaed instruments; chaotic honked car horns; and comical banjo solos is visually represented by cake-eating skulls; Frankenstein’s looming monster, and farce. Ending on a dejected Oliver Hardy retrieving his steam-rolled flattened bugle from the road: a perfect set-up for the next 40-minutes.

Musically speaking, the assiduous combo have playfully mixed-up numerous genres and added a level of sincerity and relevance to sanguine odes from a bygone era. Two of these appropriated sonnets, ‘Magic’ and ‘Moon’, both deconstruct, in a post-modern manner, their sources: Magic uses the original famous Magic Moments and Black Magic songs to create a blurred dreamy observation on sexual tension and innocent love, whilst Moon merges the Richard Rodgers & Lorenz Hart stalwart Blue Moon with lyrics from the spiritual lament, Swing Low, Sweet Chariot to finish the album on an enchanting sweet lullaby journey to the stars.

Suitably ridiculous the wistful ditty to that most symbolic of props, ‘Hats’ is a cheerful paean, imbued with a Vivian Stanshall-esque gramophone enunciated vocal and Bonzo redolent backing.   Rambunctious and just as silly is the ocean-baiting ‘Aquopalypse’ – a Jacques Cousteau funk of Silver Apples shuffling drums and Syd Barrett lyricism – and the “motorik” mannequin charade, limb-ballet, ‘Statues’.

On the surface, ‘Thelma Todd’ sounds like a swathe crooner-led satirical sketch on Hollywood starlets. Yet, Ergo’s 1920s crisp-vowel pronounced vocals betray tones of sadness over the fateful comedy stooge and beauties mysterious death; “Thelma Todd, stepping down the backstairs/Into someone’s dark room.”  Todd, an actress most often used for her looks than talent, died of carbon monoxide poisoning at the age of just 29 in a locked from the outside garage. At the time declared as accidental by an inept police force, Todd’s premature demise has seen been poured over by various conspiracy theorists and credible experts – the mob, blackmailers and jealous partners all figure in the list of suspects. This sweetened swooning tribute almost hides the more macabre and tragic subject matter under a Casio keyboard Tropicana pre-set, Ergo plaintively masquerading as a spiff.

Ergo and People Like Us’ Vicki Bennett always bring a certain captivating empirical charm to their respective endeavors, none more so than on The Keystone Cut Ups. This conceptual union of art, film and music works on so many levels, and will appeal to a broad audience. The most pleasurable and melodious education you could ever hope for.