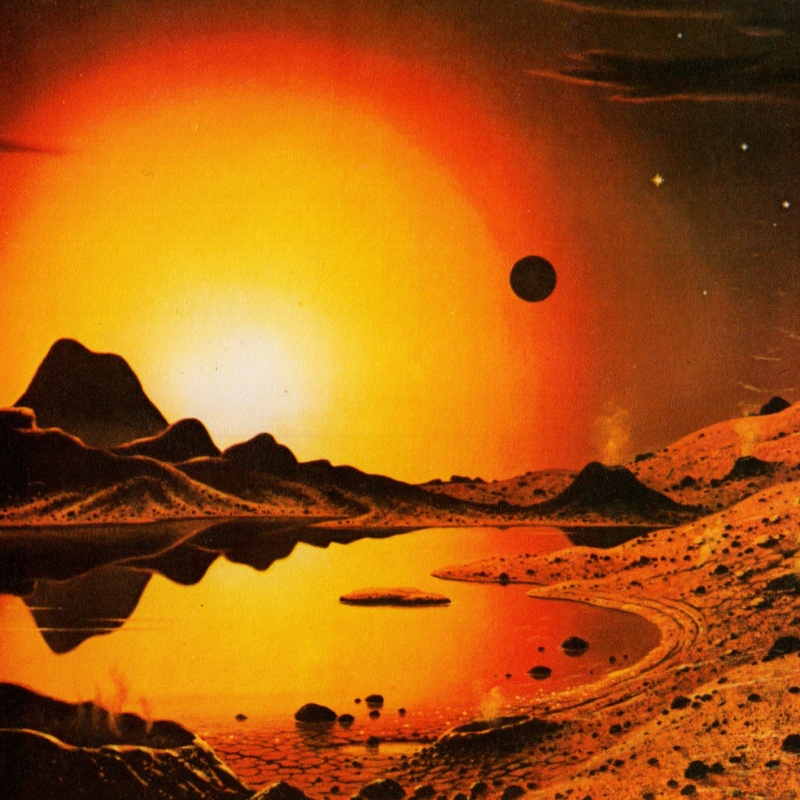 Continuing to sonically map the fictional lunar panoramas from a coterie of well-thumbed Sci-fi paperbacks, the assiduous jazz pianist Greg Foat follows up last years acclaimed debut (Dark Is The Sun) with a more inward and meditative suite of instrumentals on his sophomore album Girl And Robot With Flowers.

Principally imbued and guided by the ideas, philosophy and theories of this genre, Foat borrows both titles and material from a triumvirate of esteemed authors, Brian Aldiss, Roger Zelazny and Robert Heinlein. It’s the lamented cry and existential angst of a short story by Aldiss that lends its name to this nebula jazz blues collection; acting as the main focal point.  The 1965 vignette features, what is taken to be, the author himself, toiling with anxiety and doubt over his latest fantastical futuristic tale. Surrounded by the base objects and loved ones of the ‘here-and-now’ he abandons fiction for reality in a flux of consciousness and crisis.

These plaintive woes are perused and reflected throughout the loosely connected stream of measured songs. That main leitmotif is tentatively adhered to, built upon and stripped down to wistful melancholic contemplation; broken up into six individual congruous parts and mirrored by an accompanying sextet of well-attuned and harmonic compositions that slot into place amongst the central theme. Beginning with a suffused fugal horn and breakbeat drums, the listener is taken on an emotive ethereal voyage, as each musical composite riffs on the melodious pining foundations. The analogue sound recording (direct to tape) lift every nuanced note of the performances with a crispness and warm resonance: the chromatic harmonica soars and sails as if its in the room on ‘Girl And Robot With Flowers Pt.1’, whilst Foat’s highly articulate and concatenate band have never sounded so sonorous.

Equally as ponderous is the Robert Heinlein borrowed story for younger readers, ‘Have Spacesuit Will Travel’. Using this as a platform to produce a palatial flight aboard a translucent cruiser bound for deep space, Foat executes an indolent transient gliding trance-like hymn that soothes the mind.

Just as important are the romantic undertones, played-out in both the elegiac ‘For A Breath I Tarry’ and the piano soliloquy ‘Blues For Lila’.  The first of these allude to the novelist Roger Zelanzy’s 1966 post-apocalyptic novelette that weaves the Book of Job and Genesis into a story of a world devoid of mankind, where machines continue to function long after their masters have been removed from the Earth. The main character Frost is a ‘sentient machine’ (“…a silver blue box, 40x40x40 feet…”) that sits stoically at the North Pole, noting the movements and calculations of every maintenance machine in the world. In a nutshell the story waxes lyrically over the differences between man and machine, technology versus feeling as Frost deliberates with another unit called Mordel. Whether the dejected sad tones of Foat’s instrumental are meant as a soundtrack to the loneliness and philosophical musings of Frost, his gentle Roy Budd-esque cinematic melodies certainly lend themselves well to the plot. However, Blues For Lila sounds more personal: Foat backed by the bare minimum of fuss and a slow-brushed snare, ponders loss and despair.

An accomplished companion to his highly praised (especially by this particular writer) burgeoning album Dark Is The Sun, Girl And Robot With Flowers extends Foat’s scope as a composer and leading light of modern jazz; his musicianship remaining effortlessly descriptive.