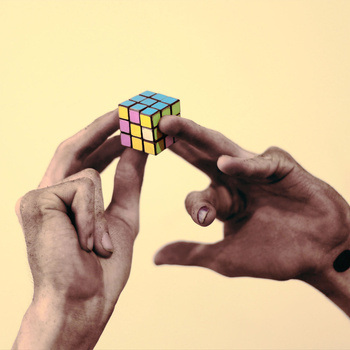 Riding on the crest of expectation, the championed burgeoning Ninetails have been backed to the hilt critically by the usual camarilla of music titles. However, for once they might be onto something, as the Liverpool quartet’s affable unease and ennui result in some interesting musical convolutions.

It’s not so much the influences – Afrobeat to angular art house pop – but the way they fuse them together. Their follow-up, to this springs well-received Ghost Ride The Whip EP, is an amorphous five-track continuation that combines flashes of polyrhythmic indie and palatial Eno-esque soundscapes.
More a placable soundtrack than defined series of individual songs, the group’s methodology is closer in format to the genres of prog, psychedelic and krautrock, as they dexterously weave terse vocal tracks into descriptive ambient vistas.

Though there are many familiar cues and redolent inspired references points, like the vapoured, backward craning guitars; melting plaintive synth sweeps; and lilting sighs, Ninetails at least sound convincingly experimental.

Merging the ‘lo-fi’ with the staccato lurch African vibe of Vampire Weekend, the sculpted opening ‘Maybe We’ shifts through the full Ninetails gamut. Awkwardly welcoming, the proceeding ‘Body Clock’ is a strange lucid meditation on time – “I tried to scream, but my vocal chords couldn’t hear my brain” – that ends with a throbbing exploratory bridge into the next song.
Almost conventional in part, the electronic surf twanged – think along the lines of Beat Connection – ‘Rawdon Fever’ goes from mournful reflection towards sunshine exaltation.

The longest track by far, and moodiest; ‘Boxed In’ is an intermitted pause, a flatlining instrumental that ominously suggest lamented thoughts. Those mysterious stirrings evaporate as the closing ‘Mama Aniseed’ ends on an echoing, cyclonic Afrobeat jog: the vocals both poignant and poetic as the band come together in one last chorus.
Slept And Did Not Sleep delivers much and backs-up the critics hype. Let’s hope they can carry the momentum into 2013 and continue to throw up some more nuanced, colourful surprises.