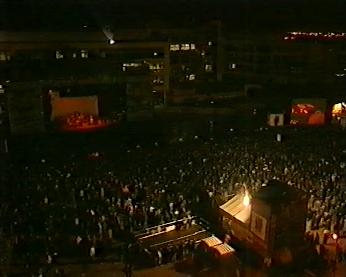 Another week is done, and as we head into the festive period Christmas parties may be more on your mind than gig going. But I want to ask you another question this week. What was the first gig you ever attended ? I remember attending various Bute town carnivals as a kid(vaguely remember seeing Aswad but I could be confusing it with another Reggae group), I also remember vividly listening to Michael Jackson play outside the old Arms park as my then step father had a ticket and my mother and I didn’t. But it wasn’t till much later on that I paid for and went to my first gig. It was during the height of Britpop in 96 or 97, down in Cardiff Bay. They called it the ‘Big Noise Festival’ and took place on a floating platform, it’s not to be confused with the Big Weekend(a annual free festival hosted in Cardiff city centre). Anyway it was headlined by the Mod father himself Paul Weller, but perhaps more interestingly it featured a slew of lesser known Welsh guitar acts of the time including the Sixty Foot Dolls, Gene(Yeah we’ll take them), Catatonia and some band called the Stereophonics?(no I’ve never heard of them either). Anyway take aways from the event included a leery pissed Cerys Matthews decked out in a Man United away top, gate crashing Space’s set, the fact that the Sixty Foot Dolls were probably the best act on the night. Kelly Jones swanning around in a big sheep skin coat like the big ‘I AM’ before the Phonics had released much at all…. And well who in the hell booked Death In Vegas? Anyway what was your first proper gig and what are your memories of it?!

4 thoughts on “TGIF: What was the first gig you ever attended?”