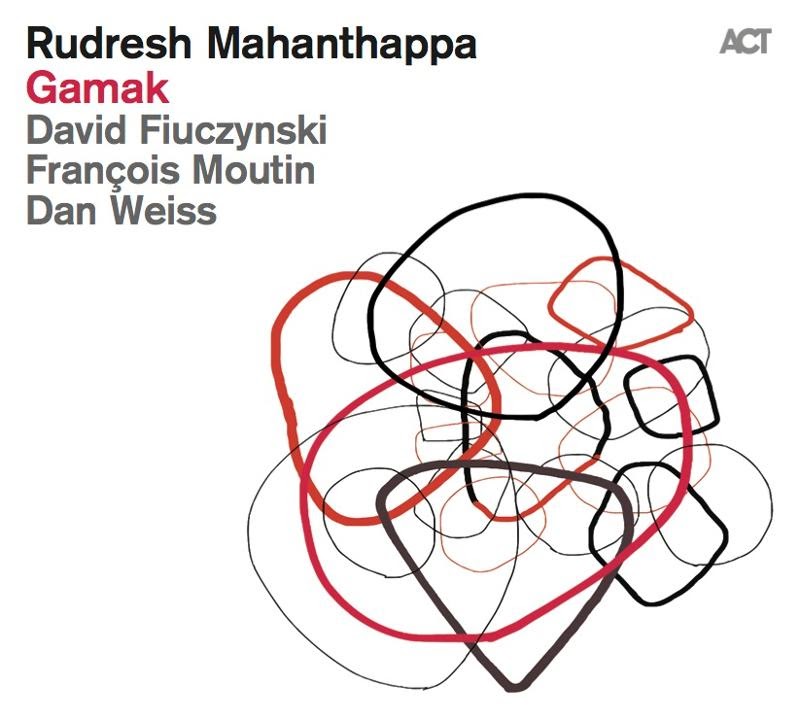 With a vociferous alto saxophone, pecking, clarion call introduction Rudresh Mahanthappa sets in motion the very first strains of a new, harassed, progressive jazz and caustic rock hybrid blueprint.  A reinvention of sorts, his latest, Gamak, has a more radical spirit; informed by the burgeoning experimental relationship between Mahanthappa and his latest foil, the microtonal guitar wizard David Fiuczynski – both originally met whilst playing in the legendary drummer Jack DeJohnette band together. For his part, Fiuczynski’s spread of arching, twanging and fluctuating linear licks and chops add a dash of wired rock and ‘Cosmic Slop’ strange funk to the abstracted shape of Mahanthappa’s complex, jilting, compositions.

Equally as imbued, if not guided, by his own Indian heritage, the bandleader’s 13th album continues to recontextualize the sounds and timings of the east – making stop overs via Arabia and the Orient. Gamak is itself an Indian form of specific stylized and studied melodic ornamentation: appropriated and used for a more amorphous purpose here.

That other synonymous foundation stone of the Indian music scene, the ‘raga’, gets a modern twist too with the blurted sax and primordial soup ‘Aboghi’, and thriller taut, pined ‘We’ll Make More’ – a re-imaging of the alto-sax wailers own ‘Balancing Act’ track from the 2002 LP Black Water.

This exploratory – and for the most part hard-hitting – thumping ‘east meets west’ approach makes for a bumpy trip, with the hour plus running time galloping by. Hurtling as it does, through a sophisticated sketch of electric mambo, a modern ‘love supreme’, off-world Ornette Coleman, and Guru Guru-esque Avant-jazz, there’s a right royal mix of styles and influences competing for attention.

Incredibly though the playing remains tight, yet able to stretch and improvise at the drop of a note. The quartet’s musical dexterity and movement is infallible, especially with the reunited return of Mahabthappa’s rhythm section – drummer François Moutin and bassist Dan Weiss.

Not so much led, as swayed, even charmed, by the host’s descriptive saxophone tones, each of the musical excursions permits the band to share an equal soloist spotlight. A joint enterprise in every respect, Gamak is bustling with perceptive interplay and organic displays of finger-bending performance, which I daresay is devoid of the usual ‘fusion’ clichés and yawning superlatives. For jazz anyway, 2013 is off to a good start.