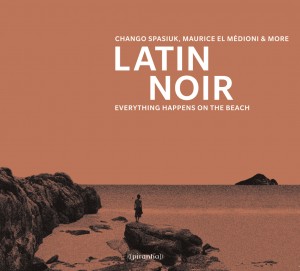 Described as an “emotional discovery of melancholic rarities from the modern and traditional world of Latin music”, the latest volume in ‘noir’ fascinated surveys from Piranha isn’t quite as existential and brooding as its’ title suggests.  That’s not to say this sagacious weathered and emotively suggestive compilation doesn’t attempt to showcase the more soulfully reflective and elegiac Latin fringes in its pursuit to unearth tales of redemption and protestation.

Following on from Egypt, Luso, Brass and Orient Noir editions, Italian-born electro-jazz producer/DJ Sonia Brex has been tasked with compiling the antithesis to “holiday cruise” Latin mix: curating a wistful panorama that spans decades (including the present day), and travels back and forth between the South American continent and the Med.

A myriad of flavours and exotic spices, the 13-track songbook traverses and combines music from a number of tropical destinations, though Cuba dominates. The ‘República de Cuba’ is represented by the heart-pranged ‘Trova’ traditions of Ana Cristina Pozo & Omar Perez’s ‘Déjame Me Que Te Lieve’, and the North African via Rumba sentimental ‘Oh! Ma Belle’, by the “grandmaster of the pianoriental meets super drummer” duo, Maurice El Médioni Meets Roberto Rodriguez.

There are also lamentable odes to the missed opportunities of the revolution (Estudiantina Invasora ‘Commandante Che Guevara’) and tributes to the aloof object of desire, “black Tomasa” (Grupo El Organo Pinareňo ‘La Negra Tomasa’, also recorded, under the title of ‘Mandingo’, by the Buena Vista Social Club).

Franco accordion vibes meander from the gaucho homeland of Argentina on the sweet redemptive ‘Tierra Colorada’ by the master of that instrument and Latin Grammy nominee, Chango Spasiuk: a fusion of and melting pot of African, Creole-Spanish immigrants, indigenous Mbya-Guarani Indians and Middle European settlers.

On the lazy groove and hot ‘block-party’ in Central Park – a meeting spot for the Caribbean rumba enthusiasts and émigrés – ‘Rumba Para Los Olu Bata’, the ‘Nuyorican’ tempo steps-up in both a show of defiance against the authorities who constantly harass them, and as a good-time link back to their roots.

With a recent LP themselves, the Watcha Clan’s bonus track, ‘La Patera’, is a contemporary, but age old, paean to the plight of boat refugees, attempting to cross the treacherous straits between Africa and Europe. The almost, operatic quivering vocals of the group’s Sista K, perfectly empathies the loose ‘noir’ tag, plaintively swooning over a dub-y breakbeat version of the Latin vernacular.

A strong, broad, collection from the Piranha stable, showcasing both folkloric and modern musings, Latin Noir is an earthy soundtrack to ponder about life’s misgivings.