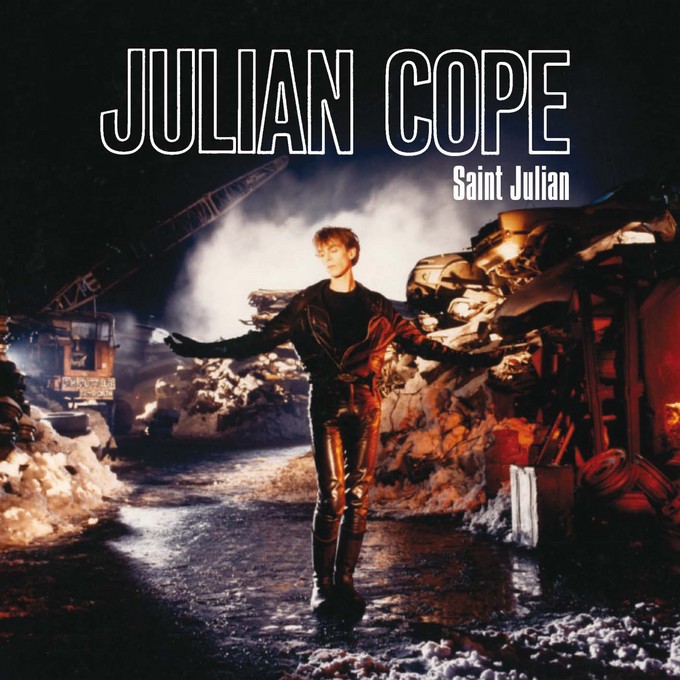 Contumacious counter-culture polymath, Julian Cope, isn’t one to dwell on his own past efforts. Not so much a progressive journey, Cope’s myriad of esoteric and ‘outer realm’ influences have amorphously guided him through the last 30-odd years, with various results.

A distant memory in some respects, he was, for a brief period, considered an alternative rock idol: projected as a ‘vox pop’ face on countless musical publications and even teenage magazines during his Teardrop Explodes years.

Despite everything he did to step outside for a piss from the proverbial tent, Cope’s many bizarre and leftfield incarnations always tickled someone’s fancy.

Like a shadow of his most obvious patriarch, Scott Walker, Cope indulged himself on the pathway to obscurity and the sublime. Inspired by his art, music and literary sources, he could adopt many vivid personas, beginning with his phoenix-like return from the LSD fixated and eccentric retreat that followed the Teardrop Explodes’ break-up.

His debut solo LP, World Shut Your Mouth, wasn’t exactly a giant leap forward but it did introduce the public to a more reflective, brooding songwriter. Condemned by indifference, Cope took to adopting the antagonistic, self-mutilating, escapades of another of his musical heroes, Iggy Pop. A rawer album Fried quickly followed, with similar results. Though his familiar and respected 90’s music template was starting to take shape, the LP is now more fondly remembered for its strange cover than anything else: the image of Cope crawling naked on top of a slag heap like some primordial half-man/half-reptile, with a giant turtle’s shell strapped to his back, threw up more questions than answers.

Dropped by his impatient record label, Cope luckily enlightened the doorstep of artist/musician Cally Calloman, who subsequently set-up a new deal with Island Records. Hardly a ‘road to Damascus’ conversion, Calloman turned Cope into a ‘born-again’ rock god, encouraging him to clean up his act and make a concerted effort at popularity!

The results of this new partnership materialized as the exalted Saint Julian.  Cope’s new snappier, pop lilting tunes, Jim Morrison lizard alter-ego, climbing frame microphone and bowl shaped coiffure did the trick, propelling the reluctant troubadour back into the realms of commercialism.

Imbued by the theatrical rock of Alice Copper and the Motor City, Detroit sound – a love which only grew stronger on later releases and in print – Saint Julian sure has the steely ‘oomph’ factor, yet also reaches back to the era of Bo Diddley, Gene Vincent, and even playfully, lounge doo-wop. The 1986 production echoes post Let’s Dance Bowie and alternative pop creations of its’ time: zingy, vibrant and full of those tight delay drum whips, so beloved of the burgeoning, treble-heavy, CD age.

The opening nuanced, crisp ‘Trampoline’ – also the second of three singles from the album – set’s in motion a new musical ascetic for Cope; his recently acquired backing group (known as the Two-Car Garage band) lending a fresh imperative, leaning towards the melodic.

By far his most commercially successful solo single, ‘World Shut Your Mouth’ – thrashed out during early sessions, supervised by the Ramones producer, Ed Stasium – is a resounding, authoritarian stomp that hits the spot as both an alternative pop anthem and broody sulk.

Shooting prangs of celestial heartache and lovesick guilt, the lolling Cope swoons and gestures like a rebellious teenage Roky Erikson, drunk on mysticism and reeling at the injustice of it all. For there are many depths to Saint Julian that though highly accessible still dares to wander into the abstract. Apart from those rockier wails and garage band organ waltzes – played by Cope under the alias of ‘Double DeHarrison’ – there are flickers of a tumultuous Gothic version of pastoral-acid on the LP’s closing odyssey, ‘A Crack In The Clouds’, and ferocious snake-hip Bad Seeds‘ rumblings on ‘Pulsar’.

Fitting the sanctified appellate album’s themes and vibe, the previously redundant Teardrop track, ‘Screaming Secrets’, and co-written with Ian McCulloch, of Echo & The Bunnymen fame, ‘Spacehopper’, nestle in with their fiery measured protestations.

This being a ‘deluxe’ appraisal, there’s the standard obligatory B-sides (from both singles and the 12” versions) and live tracks included, gathering together all the loose ends with notes by Ian Harrison. The World Shut Your Mouth 12” has a few welcome surprises, with the 13th Floor Elevators’ ‘I’ve Got Levitation’ – given some shout-y gospel by Cope – and Pere Ubu’s ‘Non-Alignment Pact’ covers – faithfully reproduced – whilst the Throbbing Gristle versus Faust ‘Transporting’ points to Cope’s future Krautrock obsession.

These additional instrumentals and experiments show a chameleon-like Cope working his way through a litany of musical guises: whether hoisting aloft the ‘jolly roger’ on ‘Disaster’; whistling and creeping from room to room in the discordant Fun House ‘Almost Beautiful Child (I & II)’; or dolefully aping Nico on the repetitive prodding piano ‘Warwick The Kingmaker’.

Saved from total obscurity, to a point, Saint Julian’s appeal and critical acclaim still ended in acrimony. The following, My Nation Underground, failed to take off, and a more lo-fi and personal session recorded at the same time, Skellington, was frowned upon by Island Records – it would finally see the light of day on the obscure Zippo label in 1989. Working through his inevitable feuds – Cope went on strike refusing to record any new material until Island had seen the error of their ways – he adopted a pagan zeal; traversing acoustic electronica, spacerock, barricade-manning folk and earnest toil.

Running parallel to his first love, Cope’s blossoming fan boy style of music-critique introduced us to long-forgotten and hidden scenes, recordings and artists. Arguably writing the definitive tracts (Samplers) on Krautrock, and equalling musing on the outer occultist perimeters of Japanese Psych and primal Detroit, yet he also successfully turned his gaze towards the Monolithic monuments of Britain, writing a well-received weighty tome on Megalithic sites.

A Druidic scholarly mash-up of Lester Bangs, Mike Stax, Greg Shaw and Hunter S Thompson, his thoroughly voracious observations and thoughts are both provocative and visceral; every bit as entertaining as his own lyrics.

Totally remote from the industry, Cope’s admirers and fans still flock to his clarion calls; from his many pontifications on his Head Heritage website, to his rune symbolized, biker gang on acid, group the Black Sheep.

As I said in my opening, Cope isn’t exactly prone to reminisce or rest on past glories, even if the occasional song from the back catalogue does happen to make it into present live performances. Still, Saint Julian is an important development in the Cope story showing a balance between melodious rock and lyrical soliloquy. Very much of its time, the transition from the Teardrop to pagan zealot isn’t exactly an obvious one, recondite and hidden as it is under the more pleasing, shinier production.

Regardless of the history lessons or attempts to put this record in some kind of cultural relevant context, it should be read as a timely excuse to evaluate one of this country’s most important maverick artists.