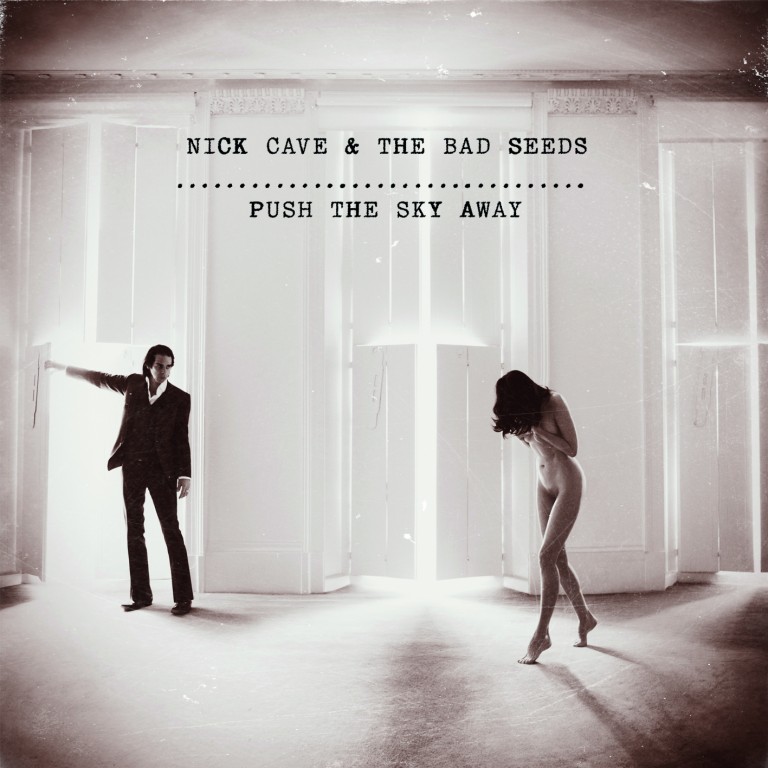 We’re a long way from The Birthday Party, Nick Cave‘s late seventies/early eighties post-punk band with whom he emigrated from Australia to the UK, leaving a trail of blood and amyl nitrate in their wake. Cave quickly established himself as dark-lord gothic master of religious symbolism, instilling debauched glamour and a post-modernist, old-testament-meets-Majickal take on songwriting; his trajectory widening through work with Einzurstende Neubaten, PJ Harvey, Grinderman, The Flaming Lips and his long-time sonic backdrop The Bad Seeds.

Which brings us to his 2013 work Push The Sky Away. Cave is still preoccupied with god, punishment, and judgement, with the front cover depicting a cold Nick presumably ordering a naked woman out of his abode, for some imagined transgression. ‘Jubilee Street’ tells the story of the sometime necessity of prostitution, over some beautifully fluid guitar from long-time collaborator Mick Harvey. ‘Mermaids’ seems to be his most commercial proposition here, juxtaposing Cave’s thoughts on the afterlife with superstition, and the feminine: he professes to believe in god, but also in ‘mermaids’ and ‘seventy two virgins on a chain’.

‘Higgs Boson Blues’ and ‘We Real Cool’ deal slowly with philosophical, existential issues, Cave’s baritone powering the profundity, probing the lazer-speed confrontation of art, love and science, and trying to decide where he stands. ‘We No Who U R’ could mean many things, but the threat underlying the Black Box Recorder style treatment, and the pronoun ‘we’ seem to indicate a controlled rage against the money-men who have orchestrated the current position of society: and an enraged Old Nick is a pretty intimidating proposition.

A couple of years on from the more demented, upbeat Dig Lazarus Dig!!!, Nick Cave returns as an old master. His themes remain, the delivery constant, but the sensitivity of The Bad Seeds is now at an exquisite, delicate place. ‘Finishing Jubilee Street’, as an adjunct to the main track, encapsulates this feeling. Present day Nick Cave and The Bad Seeds are the musical equivalent of an iceberg, slow moving, ninety percent hidden below, awe-inspiring, and unstoppable.