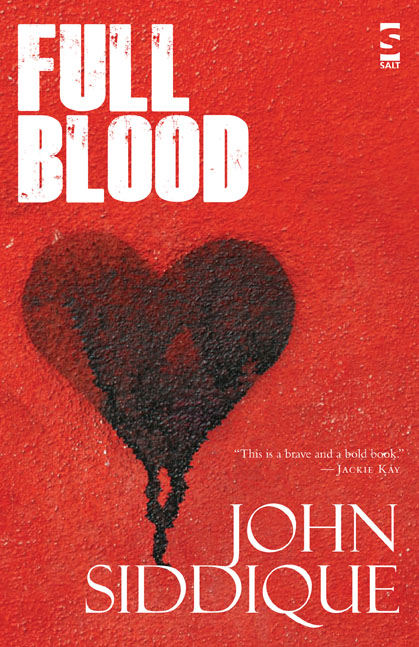 Full Blood ends with the words, ‘This is how we begin’.

After over 100 pages of poetry exploring love, sex, race, war, homelessness, mythology and dreams, this feels like a neat way to wrap things up, while carrying forward the beguiling tone which runs through much of the collection. A slight, clever nod to the reader. In another collection – one you wanted to close, put back on the bookshelves and never come back to again – it might only ever be that.

But, like the volume it finishes, ‘This is how we begin’ is also a line which inherently invites you to linger on it – what does this ‘beginning’, after Siddique has finished talking, feel like?

Having a beginning at the end of a book echoes many Eastern texts which read right-to-left. Connections between Britain and places farther East are a recurring theme in Full Blood, firstly with the powerful sequence of five poems which actually does begin the collection – The Knife.

In first of these, The National Front, we meet ‘The Cocks of the North’, whose ‘…fire is fuelled with alcohol, their fire / is fuelled with spit…’ – they are written like creatures of hell, and contrast sharply with the very human narrator of the three poems about Andrea or Julie which follow – until in John Street our human narrator meets these creatures in an ugly bullying incident, after slipping up on more than one of the rules he knows (‘Never be in the bus station / or the market at night’). It has, one presumes, an element autobiography (Siddique is half-Indian; the four-letter insult thrown by the skinhead with ‘a bubble of spit on his bottom lip’, predictably geographically inaccurate). Here the demonic visions of The National Front, seen up close, have none of the supernatural fire attributed to them – it’s become ‘a breath of beer’, and they ‘look animal’ instead. The grubby reality is all the more frightening. Never mind the nightmare glamour: here, up close, is the waking squalor – the idiot thug.

Another striking reference to an East-West clash comes in One Hundred – a pair of poems with the same title which are each simply a list of one hundred names; the first identifiably English-sounding; the second central Asian. After every 10 names, a simple statement evokes a landscape (‘I have never seen / skies so blue’). No explanation is offered, but this pair of poems so eloquently bears their purpose, that – placed on the page between two others about Afghanistan – none is needed. They are a memorial; to both soldiers and civilians. For further reading, I recommend Maureen Doallas’ exploration of this diptych at http://writingwithoutpaper.blogspot.co.uk/2011/08/monday-muse-on-one-hundred-poems.html

By no means everything in Full Blood is borne out of such violence. There are four subheadings to the book, and the second of these, Reclaiming the Body, is primarily about lovemaking. There is something to be admired in the attempt to address sex as directly as these poems do… but there is a touch of the TMI’s about pieces such as Lightly and For Our Final Fuck of the Afternoon, the reading of which feels at moments like stumbling on a newly acquired friend’s sexting conversations.

It is a testament to the work that precedes this group, though, that Siddique’s voice does feel like a newly acquired friend; and the whole Reclaiming the Body section – hot, sticky and at moments slightly nauseous as it is – seems somehow necessary in the book, a purging or a catalyst for what follows.

The poems aren’t always embedded in such gritty reality. Some are pure fantasy, with roots in dream and myth. The final two sections of Full Blood – The Tree of Life and Xibulba – are the ones most driven by imagination. It’s as if there’s a spectrum between the bus-station, experienced horror of The Knife, and the sublimity of a piece like How to Sleep (a short work of surreal beauty it’s impossible to quote just part of – you must read it in full in the book instead) – and Siddique is able to write well at almost any point along it.

It’s the poems of this latter half of the book – the ones that strive to express something of the soul, and achieve more in so doing than countless books of New Age philosophy ever will – which are the strongest rebuke to the NF knuckleheads of the first few pages; would that they could ever understand it. These poems feel liberated from the (sharply written) clashes of the first grouping, Via Negativa (which includes both The Knife and One Hundred), and talk of sex more successfully than those in Reclaiming the Body. Siddique is not afraid to go anywhere as a writer, and he rewards his readers for going there with him. And Full Blood is indeed a collection which you will want to begin again when it ends.