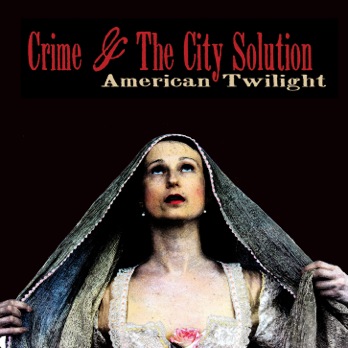 Re-born, so to speak, after a twenty-year hiatus, poetically forlorn Antipodes Crime & The City Solution, have returned to document the miasma landscape of our troubled times.

Breathing in the toxic fumes of mass-unemployment, foreclosures and desperation, their re-location to what was once the industrial hub of America, Detroit, seems entirely apt. Home to the furious garage rock and political spit of the MC5 and Stooges (to name just two big guns from the motor city’s heritage) Detroit imbues its latest émigrés with a wealth of material to chew on.

The four horseman of impending doom have tested the waters lately, their scout parties observed on the horizon by the band, who announce to anyone that listens: “Here comes the rain!”  Though there is, thankfully, always a chance of redemption: “We must not let the doomsayers and the naysayers cause us to lose our faith. Because without love and without hope there can be no future.”

Morosely inquisitive, our ‘shined-on’ vessels wrestle with compassionate displays of belief and optimism in a very bleak world. Hardly strangers to the darker and seedier side of the boardwalk, the group’s numerous twists and turns since their birth in the late 70s, has seen them burn up the punk/post-punk scenes of Sydney and Melbourne; relocate to London at the invitation of Bad Seed, Mick Harvey; and end-up gaunt and morbid, residing in Wim Wender’s black and white ‘Wings Of Desire’ Berlin: their most productive but fabled swan song.

Mob-handed, their wide-screen panoramic sound seems more spiritual and relenting, though still informed by that Gothic, almost Lynchian, twang: amplified through the country blues and Americana that’s absorbed by the group on this American Twilight odyssey.

Released as a teaser a few months back, the beatific, choral backed, ‘My Love Takes Me There’ exudes a haloed magnificence, yet equally darkened with distorted guitars and plaintive vocals that hail back to the bands earlier brooding soliloquies. A mature romantic nature is also found on the leading single, ‘Goddess’, an Apache toms-beaten power paean to a mythologized beauty: perhaps the bands most commercial anthem yet, though still permeated by those esoteric layers of lapsed Catholicism and scuzzy strident rock.

Meanwhile ‘The Colonel (Doesn’t Call Anymore)’ is a chilled reading from the scriptures, complete with a teetering Tower of Babel and ravaged roaming wolves, Bonny comes on like a mix of Scott Walker and a jaded Bob Dylan. And the ‘Domina’ is a gospel swaying, minor lament, heavenly remorseful and waning.

Looking for inspiration, whether it’s in the atavistic spiritualism of ghosts of the desert or in the sepulchre of organised religion, Bonney and his pilgrims move towards the light on their expansive return to form.