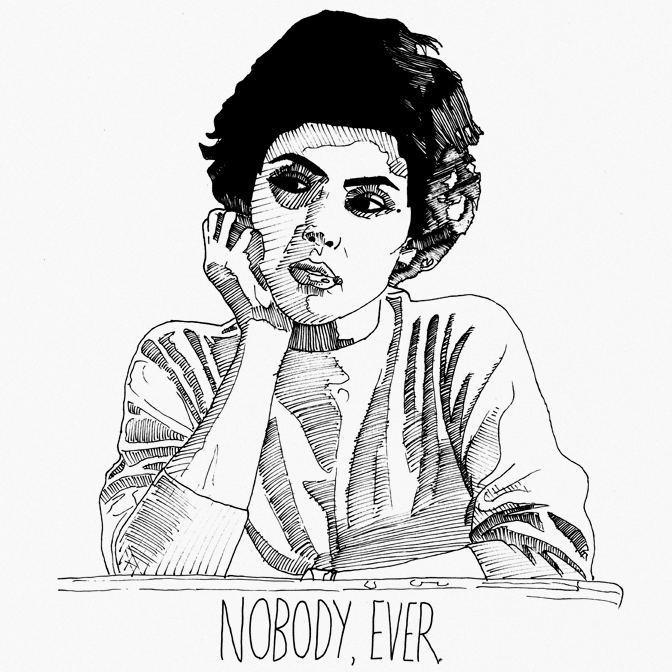 The time apart however couldn’t keep the former bandmates and long time friends from making music. So, regrouping with Tiny Cinema mainman Darren Jilks they have released their first EP as Nobody, Ever.

Combining the grit and power that made Pick Your Weapon such a vital, sadly undiscovered British melodic-punk band and with Darren Jilks’ flawless pop suss (check out http://tinycinema.bandcamp.com/ for further proof) and with a shared love for 90’s emo and poppy, indie rock Nobody, Ever is a sweeter take on the band’s previous sound.

‘On a July’ opens this four track EP. Moreton displaying incredible vocal prowess, capable of self-deprecating vulnerability and belligerent scrappiness in the same breath. Lyrics found in ‘On a July’ (“And I said that I’d be different, swore that I would change. should have known that I’m a liar baby, I’ll just stay the same”) and ‘Snap to Zero Weather’s opening lines of “Well I guess that my heart is still a fucking mess” will strike a chord with anyone who spent their formative years poring over Deep Elm’s seminal Emo Diaries compilations and the bare bones, earnestness of early Alkaline Trio.

Under the Punk Rock and Emo influence however, lies Nobody, Ever’s shared love of 90’s alt-rock. ‘Not so Good Al’ rattles along like The Gin Blossoms younger, pissed off cousins. “It Brings me down to know that you’re not around” bellows Moreton as the band hammers out chiming guitars, ragged, heart-on-frayed sleeve harmonies and the driving shove of Jonny Takhar’s drums.

‘Everyone Stood By the Side of the Road’ four tracks ends on ‘Everyone, Always’, its passionate verses and soaring chorus channelling Further Seems Forever angst and melodic, discordance. If Vagrant Records were still in the habit of signing bands with roots in the Punk rock and Emo scenes and an incorporation of Indie Rock experimentation then Nobody, Ever would slot perfectly between Hey Mercedes and No Motiv‘s off kilter muscle and warming pop-punk heart.

With Bandcamp becoming an ocean of daily releases from artists doing it their way. Nobody, Ever are showing themselves to be a great find and an exciting, prospective talent. After ‘Everyone Stood By the Side of the Road’ ends its four tracks the listener is left with an insatiable curiosity to see what Nobody, Ever release next.