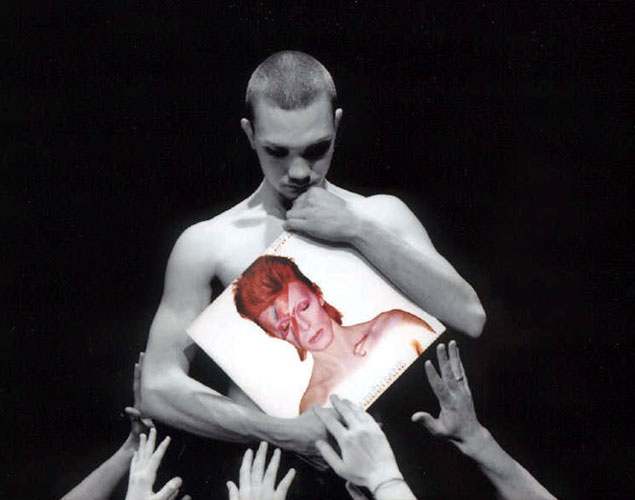 A few years ago I found myself writing a couple of plays for some teenage actors. One was a story of a boy with a mystery wasting illness confined to a hospital bed; the other a semi-autobiographical piece about a bedsit poet with a manic obsession for a glamorous pop star. Both lacked a certain spark, so in true Emile Zola ‘Germinal’ style I spliced the two together, the boy developed an eating disorder stuck in a special ward, and the obsession was with a certain androgynous and flamboyant pop star with the initials DB.

At the time Bowie was attempting another reinvention with the rather so-so album “…hours” and was about to have his second child Alexandria. He was back in the news, but no more so than any of his last few albums. David Bowie had ‘made his best album since Scary Monsters’ was the standard lazy reviewer strapline. But he hadn’t. That was to come later with Heathen.

The play was called From Ibiza to the Norfolk Broads. I secured a small theatre in the west end for a 4 week run in August – the worst time to produce and present a play due to weather (Summer still existed back then) and the clash with the Edinburgh Festival.

Quite early on before I started directing the play, I made contact with a correspondent who looked after Bowie’s official website. His name was Mark Adams, or to most ‘Total Blam Blam’. Mark was a lovely big bear of a man who showed a genuine interest in the play and offered his support, attending rehearsals and readings, taking photos and building interest in the Bowie forums and chatrooms. In his doing so, we also were inadvertently being offered the support of David, for he and Mark chatted regularly. Bowie’s musical representative on earth was a gentleman called Henry Wrenn Melleck, out in New York. I submitted details to him about the production, script, songs we proposed to use and more. Henry ran it past David. David gave his blessing and permission. We were on our way.

The play opened to rave reviews and Time Out made it Critics’ Choice, the image had also captured the fascination and imagination of fans all over the UK – a startling poster designed by Daniel Welton of Eight Design of the handsome young boy Martin – played by Alex Clarke – looking ethereal and forlorn – clutching a copy of Aladdin Sane whilst hands reached up to touch him – a subtle yet effective evocation of the end of Ziggy Stardust the Motion Picture.

The day after the Time Out review I was walking up Tottenham Court Road towards the theatre at around 6pm. In the distance outside the venue I could see some sort of commotion. As I got closer I realised it was a queue of some 200 or so people. They were queuing no – fighting – to get tickets for the night’s show (the venue was not able to take advance bookings as it was run on a shoestring). 200 people. In a 50 seater venue. Hmmm. It seemed we had a little success on our hands.

This level of interest continued for the whole month. David’s website wrote and blogged and ran features and interviews, as did the sites Bowie Wonderworld and Teenage Wildlife. The performance artist and writer Marcus Reeves interviewed me and the cast for various sites and was supportive from the start. A huge Bowie fan, he continues to be to this day.

We took the show to Edinburgh the following year. The entire run sold out. Bowie continued to back it, competitions were ran, fans came from all over the world. People queued around the block for returns each night. Madness. Then one day an email came via Mark Adams. It was from David. As well as wishing us continued luck with the play he wrote a rather geeky instruction asking us to film the production, where to place the camera, the size of the screen and the resolution of his projector. Bowie had made contact. Ground Control to Major Ade. I never filmed it. I never knew why, even to this day. Maybe I was worried he’d hate it. Maybe I just didn’t get around to it. Last year I discovered myself and the play were included in the brilliantly comprehensive ‘The Complete David Bowie’ book by Nicholas Pegg. I felt pleased and proud. It was even translated and produced in Germany. I watched it (performed entirely in German) surrounded by Bowie fans in Oldenberg. I didn’t speak a word of German.

Donovan Leitch even got in touch to see about producing it on Broadway. I’m still waiting.

I spoke to the V and A’s performance curator Geoffrey Marsh some time ago about reviving it at the same time as the exhibition but it felt a little like bandwagon-jumping. It would have been good timing but in a way I am glad I didn’t exploit From Ibiza to the Norfolk Broads. It will return, I am certain. It’s timeless because – as the exhibition has shown – Bowie is timeless.

I saw the exhibition on the first weekend. As many reviews have noted, it’s a huge amount of information to take in – the equivalent of a Van Gogh blockbuster for the David generation. The way the rooms are divided – image, film, iconography, music, video, fashion, art, influence – is mind-boggling. Rare memorabilia, footage, many personal notes and lyrics. It’s spine-chilling to see the handwritten and crossed-out words to Five Years, the beginnings of a word ‘Fa…’ crossed out and replaced with ‘queer’; the powder blue suit from Life on Mars’ illuminated under the video; the revelation that at the time he had a TWENTY SIX inch waist…

I wrote afterwards on a social networking site “…it is both crushing and simultaneously reassuring to be reminded that you, or anyone, will never mean as much, do as much, or achieve and innovate as much as David Bowie”. I feel privileged to have somehow represented him, and that he felt fit to acknowledge me and my little piece of work which would never have happened without him. It is David Bowie’s world – we all just live in it.