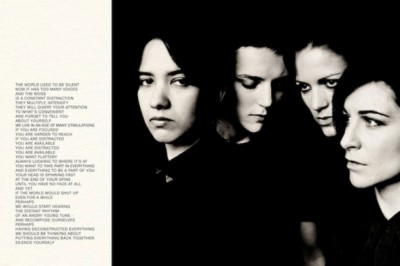 Bloody hell.The hotly anticipated debut from Savages does not disappoint. Not one iota. ‘Sounds like a bloody racket!’ quipped one of my colleagues as the pre-release album stream thundered out of the computer speakers at work.

Yes. It is a bloody racket. It’s dark, powerful, uncompromising music -and all the better for it. It’s menacing. Drenched in feedback. It does not care what you think. The promise that was hinted at on last year’s ‘Husbands’/’Flying To Berlin’ debut single is here in spades.

Bugger believing the hype. Savages are here in your face, and taking no prisoners.

Are you up for the ride?

Silence Yourself is released on Pop Noire/Matador on May 6.

Ahead of the album release, the album can be streamed over at the band’s website: