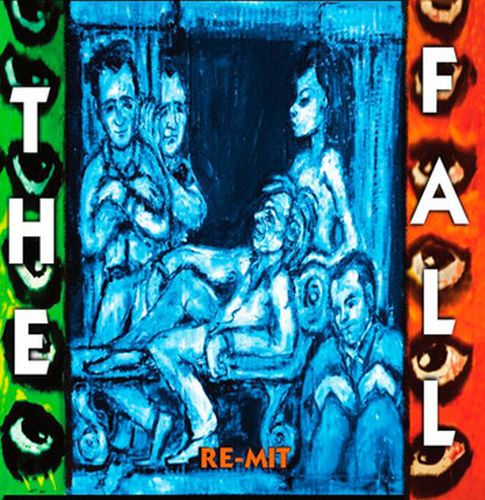 The Fall mean different things to different people. To some it’s just a northern bloke shouting random nonsense over repetitive music, while to others they represent an ever-changing musical revelation fronted by one of the greatest poets of our time, and an outfit that continues to experiment and break boundaries. They were John Peel‘s favourite band and have influenced a massive array of bands and artists over the years.

For those who aren’t aware, Mark E Smith formed the group in 1976 and about 66 different members are said to have played in his band over the years, a lot of them exiting the group due to conflicts with the notorious frontman. However this particular line up of the band has now recorded its fourth album together, a kind of stability never seen before within these ranks.

It’s the 30th Fall studio album overall, the first since 2011’s aggressive, sometimes messy ‘Ersatz GB’ and it begins in a brighter, cleaner but no less exciting manner with the brief ‘No Respects (Intro)‘, where the sound has clearly taken a turn towards surf-rock. It has no vocals and the style is completely at odds with the previous album, yet you could probably guess that it was The Fall. By the time the raucous ‘Sir William Wray’ bursts in there’s no mistaking who this is, as a heavily distorted Smith vocal snarls through the speakers accompanied by a kick-ass riff, noisy synths, intertwining guitars, boisterous “hey!”s and the propulsive punch of the rhythm section. Quite clearly, the band sound tighter and more confident than they did on the last LP. 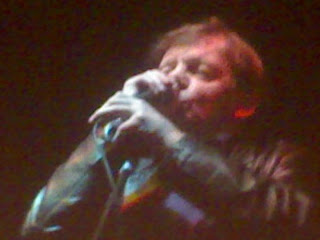 Harking back to the weird blues of ‘This Nation’s Saving Grace’‘s ‘What You Need’, the bizarre and rather fun ‘Kinder Of Spine’ sees a typically cantankarous MES barking out indecipherable lyrics that involve a “woman under the duvet”, and along the more abstract lines comes ‘Noise’, composed of bizarre electronic sounds, skeletal guitar and another puzzling Smith narrative. Also sounding like early 80’s Fall, the post-punk growl of ‘Hittite Man’ makes good use of ominous bass, shades of Joe Meek, a snaky high pitched guitar line and the repetition of simple key elements, before Smith seems to transform into a rabid animal at 5 minutes 30 seconds. 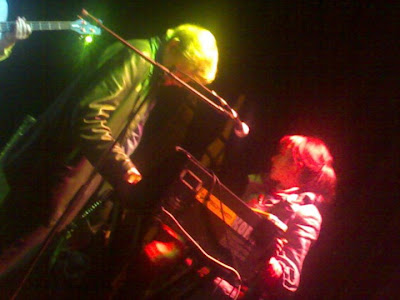 ‘Pre-MDMA Years’ is a minute or so of unique Fall weirdness followed by the marvellous full length ‘No Respects Rev’, where MES does his thing against an uptempo melodic backdrop with subverted surf vibes and bright Byrds-like guitars, descending into joyful chaos towards the end. Once again a true maverick, Smith’s demented gargle marks his arrival a minute into the acidy, synth-heavy ‘Victrola Time’ before locking you into another infectious groove, powered by an urgent almost drum n bass rhythm. Like with most Fall records it’s hard to know what any of the songs actually mean, but on the rather playful ‘Irish’ as well as a meaty bassline, a jig rhythm and some extremely odd tuba-like synth noises, there’s a mention of James Murphy from LCD Soundsystem whose ‘Losing My Edge’ is the most blatant Fall imitation you’ll over hear. 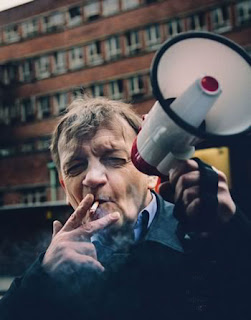 ‘Jetplane’ couples infectious keyboards with a nagging military march rhythm and the sound of two Mark E Smiths ranting about airline queues over one another, while ‘Jam Song’ isn’t as unremarkable as its lazy title suggests, beating out a lively funk pattern and bringing to mind a more explorative, improvisational take on the group’s early 90’s sound. Closing the LP, the fantastic ‘Loadstones’ is a lot less loose, and its punishing, no nonsense hook doesn’t take long to bury itself in to your mind. Again it demonstrates why this particular line up of The Fall has lasted longer than any other, and how they have developed as a musical unit.

It’s hard as nails, yet none of this LP seems to be in the same thrashy, metal vein as ‘Ersatz GB’, instead we are presented with clearer production and a style that is livelier and more melodic in places. It revisits The Fall’s past brilliantly while continuing to push things forward in an uncompromising and challenging fashion. In terms of Fall albums it’s not quite a classic, but certainly one of the strongest of the last decade or so, and easily the equal of 2010’s acclaimed ‘Your Future Our Clutter’. Forever destined to divide opinion, if you don’t like The Fall, it will make you dislike them even more. If you are a fan, chances are ‘Re-Mit’ will not disappoint.

Buy your copy of ‘Re-Mit’ HERE