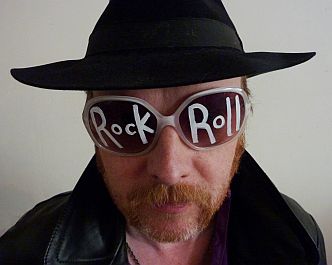 Luke Haines known previously for his work with amongst others The Auteurs and Blackbox Recorder releases his new album ‘Rock And Roll Animals on the 29th of July and supports it with a show at London’s Borderline show on Tues 30th July. Watch a teaser trailer below.

Rock And Roll Animals is a psychedelic story for grown ups (and children). Jimmy Pursey – is a frisky fox; Nick Lowe – a solid badger and Gene Vincent – a cat who’s seen a bit more of life than most of us. Three furry freaks. Three Rock n Roll animals. The fable of our four-pawed shamen is narrated by the good folk of Magic Town. This is a story of righteous rock n roll and how our three rock n roll animal friends, when not frolicking in the undergrowth, do battle with their most unrighteous nemesis – a fuck ugly bird (from Tyneside) made of steel and wire called The Angel Of The North.

So friends, free your minds, turn off your modern scrying screens and turn on your 21st century imaginations. Let us follow the townsfolk into the woods where the rock n roll animals are freaking out and running wild. But remember one thing: Nature is an evil mother.

Luke Haines has made loads of albums, written a couple of books, and has generally done loads of stuff. You may or may not give a crap.

‘Rock and Roll Animals’ is Luke Haines’ new album, which features occasional narrations by Julia Davis (Nighty Night, Hunderby). It will be released by Cherry Red on July 29th 2013. CD, Vinyl and Digital.

It will be preceded by a 7 inch single, the title track from the album ‘Rock N Roll Animals’ with two non album tracks as b – sides.
The track listing of the album is as follows:
1. Magic Town
2. Magic Town Interlude
3. Rock And Roll Animals
4. A Badger Called Nick Lowe
5. Three Frendz
6. Gene Vincent
7. Magic Interlude 2
8. The Birds…the birds
9. Angel Of The North
10. We Do
11. From Hersham To Heaven
12. Rock And Roll Animals
Luke will be playing London’s Borderline on Tues 30th July – www.ticketweb.co.uk/event/YGB3007