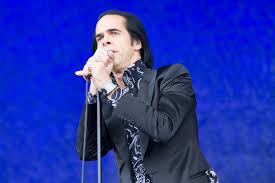 Spiritual as religious blues gets without naming the Lord, Cave’s sthenic theatre of both plaintive balladry and howling ‘in-your-face’ drama blew a Herculean breathe of fresh air through the weekend’s sanitised state of non-committal inertia. Kitted out in an unseasonal dark suit, his raven throne of hair hanging like Bela Lugosi’s cloak – though that fine barnet is starting to look a little like Gene Simmons bouffant – Cave commanded the main stage with his trusted wide-eyed orthodox holy man, Warren Ellis, to his left, whilst the battle hardened and bedraggled Jim Sclavunous, Conway Savage, Martyn P. Casey, Barry Adamson and George Vjestica encircled like an esoteric lounge version of The Band.

From the pulpit into the crowd itself, the surly pontiff of snake-hip, dark carnal pleasures, struck various hand poses; either in exuberant emphasis or to usher away petty distractions – as when he shooed away the cameras from in front of the stage, in advance of his later walkabouts into the masses, or when he scornfully dismissed the poor security guard whose job it was to get a handle on the singer so he didn’t fall flat on his face.

Hardly the ‘best of’ or even greatest hits from the annals of Gothic heroism, the set was however filled with congruous highlights; stretching from the Bad Seeds burgeoning birth in the early 80s to the outstanding latest, Brighton psychogeogrpahy themed, Push The Sky Away opus.

Opening with that album’s ‘We No Who U R’, the echoing shuffling percussive intro and Ellis’ sweet, majestic flute beckons like a diaphanous invitation to a world of sorrow and lamented realism. Following in its patient but menacing themed wake is the sorry tale of modern prostitution, ‘Jubilee Street’.  Unfurled gently with a soft caress, the group works towards a mounting tumultuous whirlwind climax, as our tale of woe turns uglier and sadder. Cave flits between discordant piano and rambunctious fits of ritualistic dancing as Ellis goes at it with the violin: torturing the poor thing until it screams. Both songs executed with audacious gusto and deadly seriousness.

Cave redeems a past battle cry from the crypt’s archives next, recalling 1984’s ‘From Her To Eternity’. Part incantation drone, part skulking terror, the incessant voodoo backbeat and blunted flick knife piano stabs creates an imaginary clearing for the singer to venture off stage and across the great divide. Up close and personal, he hollers into the unresponsive hoards; a brave attempt to shake the fear of god into them.  So far out on the proverbial limb is Cave that only when the tribal beat ends does he realise he’s ‘…fucking miles away’ from his comrades.

Now it’s time for some motor city rock’n’roll, as the band strike up 1988’s, spot of light relief, ‘Deanna’. Tom toms beat out a primal rumble and a ‘Nuggets’ style organ adds a touch of 60s ghost house garage to the call and response shout out.

An energetic macabre version of ‘Jack The Ripper’ and a stormy introductory Biblical, ‘Tupelo’, see the flock beginning to settle. Disheveled, wet through with sweat – Sclavunous now both missing his coat and with his shirt unbuttoned – they bravely continue ‘toe-to-toe’ with the devil incarnate. As both a respite and an opportunity to calm the maelstrom, Cave settles into pianist balladeer of longing with a moving rendition of ‘People Ain’t No Good’. Stripped with the bare necessity of accompaniment, this assuage intimate version is subtly played out to a congregation of nonchalant onlookers – a rather lame segment of that audience sway along with arms held aloft.

Offering only a vague show of repeated lip-synched lyrics and a sea of inflated debris – blown-up sharks, monkey’s and aliens with guitars strapped to them – the faithful’s oblations seemed rather pathetic as Cave launched into a roaring, debauched ‘Stagger Lee’. Ill-footed once again, and teetering on the barriers, Cave loomed large over the crowd. Eventually a willing concubine of the occult – a fresh faced beauty with flaming hair, bedecked in a strange billowing white fashioned ceremonial dress – was hoisted up onto someone’s shoulders. She stared transfixed and mesmerized as the wicked Lothario of the ‘crossroads’ first wooed than screamed the tale of that bad motherfucker Lee straight into her face.

Wailing and flailing, Cave returns to the sanctuary of the stage to finish with the caressed titular track, ‘Push The Sky Away’. Of course, an encore brings the brood back as they do gracious service to their chilling, ‘for whom the bell tolls’, Waites-esque, ‘Red Right Hand’ ode from 1994: Resplendent in a galling red light, Cave plays up to the preacher man role, crooning a master class in sinful augury.

Christ knows, or cares for that matter, what the majority of the audience thought; waiting as they were for the headliners, Mumford & Sons to appear – a bed-wetting troupe of Tolpuddle Martyer dressed middleclass kids, weaned on quasi-ancestral folk.

The grown ups had arrived before bedtime to vent the gospel of rock’n’roll and blues: mad, bad and dangerous to know. Antagonistic and even hostile, Cave and his inimitable miscreants have traversed many fertile themes and styles, and now with Push The Sky they’ve finally eased down the tempo and rage to follow a more soulful path of reflection and relevance. And in the process they’ve produced, perhaps, one of their best albums yet. Live they’ve pulled off one of the year’s best performances.