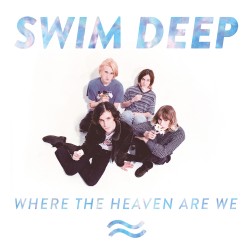 If you draw a line between Two Door Cinema Club, Richard Ashcroft, late-Stone Roses, The Soup Dragons and Deep Blue Something, it peters out, bedraggled, spent, bored, and hangman-ned. It is not Swim Deep‘s (the inappropriateness of the name is telling – the lack of depth of this band can’t be plumbed) fault; it’s the ignominy of being a ‘buzz band’. Like Yuck, Hurts and Peace before them – ugh, those names – largely irrelevant, pushing nothing along and adding nothing new, just another brief cog in a lazy machine to hype up, sell a couple of magazines and downloads, and forget about.

‘The Sea’ and ‘Beach Justice’ are the most interesting things here, marked out by their cuteness – but the rest rather reek of seaweed, stagnant water and nuclear power plant downdraft. In a landscape threatened by ‘Get Lucky’, MGMT and QOTSA‘s new albums, ‘The Next Day’ and Fuck Buttons, is this the best British indie can come up with?