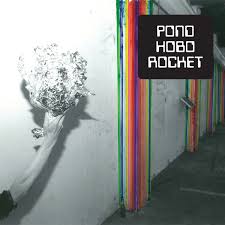 ‘Whatever Happened To The Million Head Collide?’

Have you ever wondered how it must feel to look out over the Indian ocean from a Perth clifftop? Pond‘s Nick Allbrook has taken that responsibility out of your hands; Hobo Rocket encompassing a riot ride of free-form bliss, sonic experimentation and utter disregard for anyone but his band’s own ears…and they want to share the smoke with you.

Pond evolved from the same organism as Kevin Parker’s also-excellent Tame Impala, and movements within the movement are incestuous to the point of no one actually knowing which band they are in anymore. The difference between the sound however is in weight: Pond are heavy, man, in the same way that late-Flaming Lips, early-Black Sabbath or King Crimson were heavy.

‘Giant Tortoise’ is the sound of Robert Fripp and Adrian Belew jamming with Mogwai, and is kaleidoscopically fun; best title of the year must go to ‘Whatever Happened To The Million Head Collide?’ and it’s Butthole Surfers-meets-Deep Purple nutzoid metallisms; ‘O Dharma’ returns an Albarn-esque strum (The Good, The Bad and The Queen version), slowly morphing into Gruff Rhys on a beach with Mercury Rev.

‘Aloneaflameaflower’ is the darkest moment here, it’s brooding intensity surprisingly bringing to mind latter day Cure or peak period Bauhaus; ‘Midnight Mass At The Market Street Payphone’ highlights the yawning chasm between Pond and for example Wolfmother, Ocean Colour Scene or Oasis – bands who will stop at nothing to xerox note for note their heroes, in constant thrall to a feeling they once had. Pond love those old sounds, but could not give less of a shit about rock reverence or nostalgia-apeing…Frank Zappa would be a better touch-point, and these guys do indeed Freak Out.

Best ‘what the fuck?’ moment here is the title track, which is a pleasing Hawkwindy stomper in the music, fleshed out by what sounds like Allwood’s drunk uncle rambling incoherently over it – completely bizarre on first listen, but actually quite the grower. Think an aussie Mark E Smith guesting on an MGMT b-side. Put simply, so refreshingly for such syncopated, regulated, scenester times, Pond rock, and don’t particularly care what you, Tame Impala, or their mother think about it.