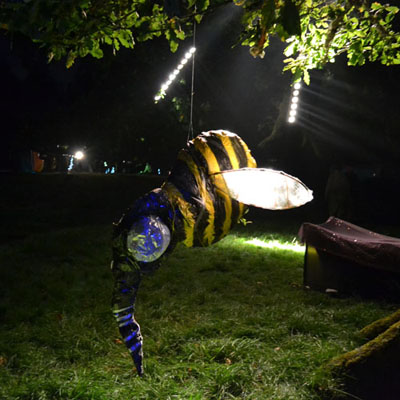 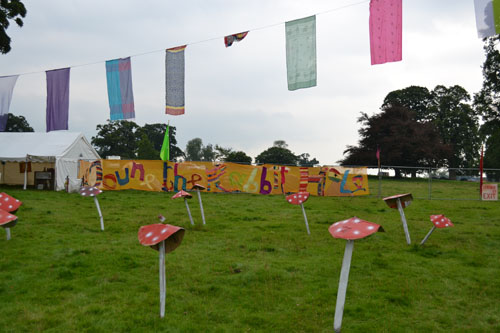 This year being their fourth, Doune The Rabbit Hole had yet another new home in the wonderful oak and beech filled Cardross Estate near the Port of Menteith, Stirlingshire, Scotland. A more accessible and more regular festival layout compared to last years (Duncarron Fort) made it simple getting around, and with a capacity of around one thousand, bumping into the people you’d made friends with again and again made the whole thing a beautifully intimate affair and genuinely provided an incredible community-spirited atmosphere other festivals can only dream of. Given the weekends weather, which was mainly sunshine throughout, the only negative experience that plagued Doune 2013 to a certain extent were the wasps. But to be fair, they were there first and everyone took it in their stride and it probably inspired a few dances. The onsite artists even let them influence their work with giant wasps hanging from trees as well as some paintings appearing on the perimeter fencing. Doune is about more than the music, its about the experience, the art, the people and the good times.

Deciding to make the most of the full weekend we arrived on the Thursday evening for the pre-festival entertainment. After dropping our gear in our Redkite Yurt we made our way to the arena for a look around. Traveling from the campsite down it became apparent just how many ridiculously huge trees we would be merrying amongst for the next few days – bliss. We made our way to the Baino Tent to catch our first act of the festival The Fast Camels. An excellent way to start with some retro rock sounds. My heart sank a little when the guitarist had the misfortune of strap failure between songs, the headstock of the guitar bouncing off the stage, but they carried on using a replacement. Highlight of the night was without doubt the mighty Orkestra Del Sol. Their numbers reaching double figures of brass instruments squeezed on the main stage (Jabberwocky) and still managing to bounce around and get the crowd ready for the weekend ahead. They made comment about being worried they might inhale some of the larger insects flying around, clearly attracted to the stage lighting. Setting the tone for the weekend, they invited everyone to join arms with their neighbours and dance the polka together in lines. Traditional brass party tunes with a modern twist – perfect for the first night. Garden of Elks played some synthesised beats in The Baino tent to keep the dancers dancing.

Friday afternoon saw Haight Ashbury bring their brand of psych Americana rock to the Jabberwocky Stage. Their two female: one male ratio (Jennifer, Kirsty and Scott) give the vocals a sweet sound and the harmonies are outstanding. Guitar, bass and percussion played standing are often interspersed with piano giving the illusion of there being far more than the three members. 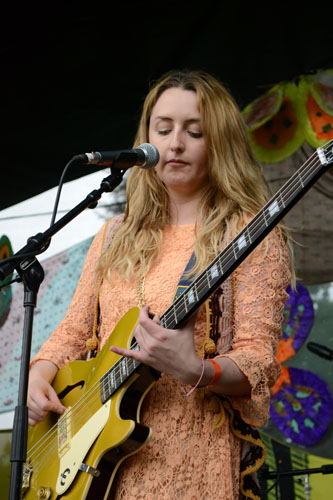 Rick Redbeard, better known as the frontman for The Phantom Band, treated us to his solo material in The Baino tent. Armed only with his acoustic guitar and the odd tambourine stomp, he more than held the attention of the largely seated crowd. Rattling through material from his debut release from the turn of the year No Selfish Heart he gave a heartfelt performance with the highlight here being Any Way I Can.

Meursault on the Jabberwocky Stage seemed to play a set of what may have been largely new material. Classics “Flittin” and “Hole” were best received with the latter showing off the bands softer side, as well as Pennycook’s undeniable vocal talent. Closing their set with an excellent cover of Pink Floyd’s Interstellar Overdrive was a fitting ending, all distortion and screeching feedback. Magnificent.

Fresh from their recent SAY Award nomination PAWS in The Baino tent drew a fairly large crowd and had the place bouncing. A three-piece that has that gift of being able to read each other almost psychically means their sound is exceptionally tight and accomplished. The bass player along with a few friends in the front row managed to polish off a bottle of Glen Livet in record time as well. For the remainder of the evening I caught snippets of sets from the likes of Trembling Bells, The John Langan Band, Gallon Drunk and Miaoux Miaoux who if I was honest all paled in comparison to an amazingly ramshackle set from Galoshins.

The now ridiculously sweaty Baino Tent was in chaos as was the stage and it made for an excellent show all round. Their sound can be almost ADD and scattered at times, but this doesn’t get in the way of a good tune. Organ melts into furious drums and heavy guitar. An excellent if chaotic live band.

Saturday saw a fairly early rise to grab some breakfast and check out Adullboy at the compact Fruitstand & Takeover tent. His often dark and self-deprecating lyrics are delivered over his acoustic guitar and made for a jovial start to the day. Beerjacket is another solo artist, although here he brought in the backing vocals of Julia Doogan to help. His guitar picking is excellent throughout as are his vocals and it’s hard not to nod/tap along with his tracks as can be seen around the tent. Washington Irving played the Main Stage and their live sound, somewhere between big country and The Pogues at times, converted well in the sunshine with the crowd (including some toddlers) dancing away. Over to The Baino tent to catch Machines in Heaven. Having enjoyed their Glasgow Jihad EP I’m sad to say that live they didn’t do it for me. Something didn’t gel and it sounded as if each member of the band was playing from a different song sheet. A real pity as I had been looking forward to their set.

On the flip side of that was a band who I had never heard of, Stealing Sheep. Unsure what to expect I was completely mesmerised for the entire set. An all female three-piece from Liverpool their individual musicianship is second to none, and their song-craft is something to behold. Tracks such as Shut Eye and Genevieve showed off their whacky sound and they looked genuinely humbled by the rapturous response they received following every track.

John Knox Sex Club aside from their unusual name, also have an unusual live set. Vocalist Sean Cumming not content with being on the stage of the Baino Tent decides instead to deliver the majority of his set from the crowd. When not finger pointing at the crowd he’s finger pointing at the band he’s left on stage. Their folk-rock sound is pushed to the limits during the set closer where lyrics “there’ll be hard times to come” are repeated over and over during an extended outro. During which Cumming gives as many members of the audience as he can a hug. I caught snippets of The Pastels, The John Langan Band (this time headlining the tiny Inspire Stage) and then the second half of Clinic’s headline set on the Jaberwocky stage. Kitted out in full medical scrubs and masks Clinic cut a rather menacing figure onstage which added to their off kilter post-punk sound and Ade Blackburns vocals. In stark contrast in the Fruit stand & Takeover Tent Rozi Plain gave a masterclass in restrained playing. In complete control of her guitar she brought the sound up and down without batting an eye, her voice equally stunning. Backed by Bart from eagleowl on bass as well as numerous other musicians from other bands the entire audience were completely hushed throughout.

Back at The Baino tent Colonel Mustard & The Dijon 5 showed that they’re more than just a quirky name. Scotlands answer to Black Grape had the entire tent dancing in a matter of minutes. Depite the large number of band members already onstage there were several drunken stage invasions, along with many moments of crowd surfing and madness. Party tunes with jokey lyrics were the order of the day and the crowd lapped it up. With Colonel Mustard giving out freshly cut roses to the ladies in the audience afterwards, a true International Sex Hero as their song would suggest. 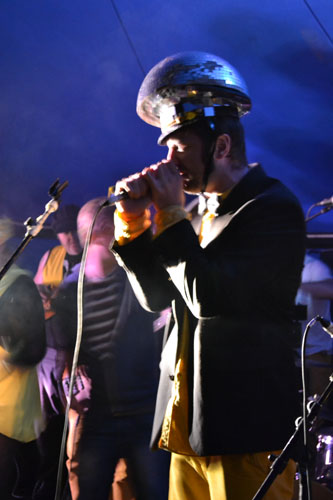 Sunday started for us with a band going by the name The Blueswater on The Inspire stage. They said they were happy to be playing outdoors in the sunshine having played over thirty shows in as many days in dark pubs at The Edinburgh Festival. They ran through blues and soul covers such as Hoochie Coochie Man, John the Revelator and Use Me as well as playing some nice slide guitar. With their ludicrously tight musicianship and excellent three-part harmonies, Hidden Masters were as ever on top form. Singer Dave joking with the crowd that given the choice they had opted to play on the Sunday as “you’re all mentally and physically weakened, and that’s just how we need you”. Having never seen The Cosmic Dead their almost hypnotic, exceptionally heavy bass lines and tribal drumming patterns appealed to me pretty quickly. Their tracks are more like extended jams with the odd vocal over the top. At one point even chanting over a track, “There’s only one Alan Bain” in reference to Baino, a part of the Doune team for whom the tent they were playing in was named in memorial. I caught the end of Rachel Sermanni who had a busy Fruitstand & Takeover tent settled down to watch her play her solo acoustic material. Back on the main stage Horndog Brass Band in a similar vein to Orkestra Del Sol played some excellent funky brass tunes of their own as well as a few covers including Praise You by Fatboy Slim. They did an excellent job of keeping the crowd moving, getting us to crouch down for the quiet parts along with them, then burst back into action again was great fun. I caught the start of Venetian Snares in the Baino tent before retreating to catch Shambles Miller over on the Fruitstand. His catchy, endearing set brought plenty of smiles and probably won him a few new fans. Not sure if he managed to sell the single handmade festival souvenir T-shirt he’d offered. Straight after was Honey and the Herbs who could be described as ‘Festival Representatives’ given that members were either volunteering at various stages or playing on them in other guises. An excellent set of harmonious, almost lounge music followed, finishing with a track they advised everyone stand up for. The song ended with a bit of a freakout and had the tent bouncing along. Bo Ningen were the last live act of the festival for me and they didn’t disappoint either. Entering the Baino tent not long after they’d started you were greeted with an enormous and heavy sound. Barely able to see the majority of the band members faces due to their knee-length hair for a good chunk of the set. They tore through song after song with walls of feedback wailing and finished with a frankly ludicrously long end section where lead vocalist Taigen climbed upon a barrel at the front of the stage and thrust her bass towards the crowd for a good five or ten minutes and then joined by the guitarist on another barrel. Frighteningly good end to an amazing set. 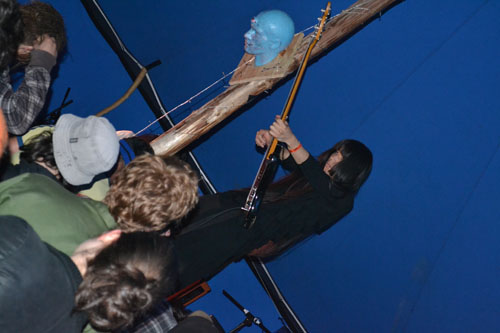 We made our way down to the Low End stage for one final fling and were treated to some UV’s, light shows and banging live beats. Being handed a pair of cardboard 3D glasses by a dancer within the crowd I was skeptical as to what they would do, but in true Doune spirit I was pleasantly surprised to find they allowed me to see love-hearts all around by way of some holographic wizardry. And after throwing some shapes, the festival was over for another year. 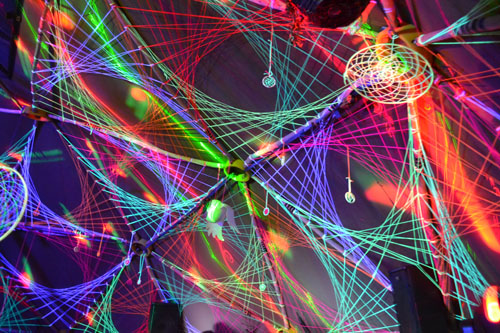