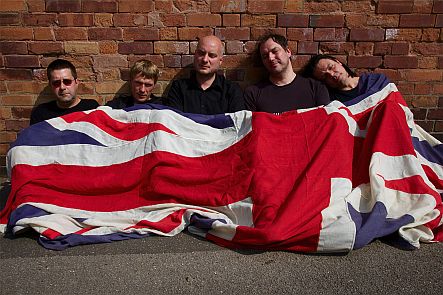 Formerly typified by scorching anger and corruscating, intense guitars, Six.By Seven have returned after several years (after stating their ‘death’ in 2009) with an album that – though still clearly riled – is strident and exultant. Love, Peace and Sympathy, released earlier this year, is the band’s most overtly melodic album. The swathes of swirling, heavy guitars are still in abundance, but there is a clarity to the vocals, an openness of emotion, and a more drum-driven and urgently appealing sound that makes it feel like a new band and not picking up where they left off, but instead reborn, revitalised.

Singer/guitarist and founder member Chris Olley has, since the band’s split, been incredibly prolific with work on solo projects, being an acoustic guitarist/singer-songwriter as well as experimenting with electronic, synth-based compositions that are clearly spurred on by ’70s and ’80s European artists, arousing in mind the soundtrack to the Chris Petit film Radio On.

Bringing back Six.By Seven is, Chris says, necessary, because ‘nothing compares to making a racket in a band!’ He recruited Steve Hewitt, former drummer with Placebo, and original members James Flower and Martin Cooper complete the line-up.

We spoke to Chris about Six.By Seven as they are now, as well as exploring the band’s past.

CO: I’ve played Glastonbury on and off for 12 years or so. I’m not a great festival-goer, I’m pretty much in and out. But what was good about it was there were a lot of people there. There were about 2,000 people. Apparently we sounded great.

GIITTV: You recorded the new album not far from there…

GIITTV: The new album has a lot of slow-burning anger to it…

CO: When we first started, we were the sort of band who knew what it didn’t wanna do. But didn’t really know what it did want to do. But I think I’ve worked it out now. But it changed, and it’s a journey. Back then, especially when we did the second album, we were very fed up. The cracks were starting to show. It was an experience. It was a very negative time, and a lot of it came out in the music. We wrote songs like England and a Broken Radio and Overnight Success. And we slammed down run of the mill punk rock. Songs like Eat Junk Become Junk, Sawn off Metallica TShirt, Speed is in Speed is Out, I would never write songs like that now. I’m really into making slow-burning/building stuff.

GIITTV: It reminds me of The Cure, the way the tracks sound and are set out…

GIITTV: You’ve got your own studio, in your cellar. Can you describe it, and how you work?

CO: I had a mixing desk in there, but it’s not very big. I’ve got a Hammond in there, some analog synths. And I record everything in mono, very simply, stuck together. I work really quickly. I like to have something set up so I can work really simply. I do a lot of stuff on Porta Studios, not computers so much – on devices where you can’t always see the music. Quite a lot of the time I’ll sell something and buy something else. I had this brilliant Tascam 8-track recorder with two mics, and you can record all round the house with it. It’s a different way of working – taking the instrument to where you are working, it’s more flexible. For me, it’s always about speed. I’m impatient and like to work quickly.

To me writing songs is no different to a carpenter making a table. I don’t have writers’ block, and I don’t have to have ‘inspiration’ come through me. You can get rid of everything, and go right back to basics: a guitar, a piece of paper and a pen.

With songwriting, I take the Neil Young approach, I don’t think too much, I let it all come out. The first song on the album is called Change. When I wrote that, I demoed it, I didn’t really know what it was about. Eight months later, I realised it was about my father. That part of my life has been quite strained, and it’s always been a monkey on my back. With this record, I’ve tried to exorcise that, let that all come out, just be honest. Because people are so far away anyway, and they don’t have any interest in what I do, so it doesn’t really matter. What’s really interesting is that a lot of people are sent round the twist by their nearest and dearest. You can meet a young man and he’s fucked up, and generally it’s been created by people at home. And those people are supposed to be supporting you. I found that quite interesting: the damaged put in place in childhood… [when] the very people who are supposed to be looking after you are doing the opposite. That’s why I called it Love and Peace and Sympathy.

Fuzz guitar and shoegaze style bands are quite cool again now, and I wonder if you feel you ‘fit in’ more now than back in the late 90s/early 2000s.

Is it? That’s a good thing. I think when we brought our first album out in ’98 it was the year of the superstar DJ. It was like Fat Boy Slim. People dropping E’s. Creamfields, Gatecrasher. Being a guitar band was a no-no, then. It was kind of an interim period. Britpop had ended, and the ‘next big thing’ hadn’t come along to create a movement. But it was an interesting time, maybe allowing more room for a wider variety of bands… As well as Six.By Seven, there was Clinic, Mogwai…

We got lumped in with the post-rock scene. It all started with Paranoid Android. All through the Britpop thing, we were doing sprawling, eight minute things. It was quite good though – A & R people would come and see us, they’d heard we were really good, and we were doing eight minute songs. So we couldn’t get signed. Our manager said to us, Radiohead are just about to release a seven minute single. Everything started to change. We’d been doing this, but suddenly, the NME said [this sort of thing] was amazing. But it wasn’t really. But you get a deal and you’re part of something. But now, we can’t get any support from anywhere, really. It’s not our time. But it was never our time. It’s quite sad really, ‘cos you live this dream of wanting to make music, but it’s swings and roundabouts. Sometimes you can’t pay the rent, sometimes you can. It’s a pantomime existence. I never made any money out of it. And then all the downloads started. Things are more fragmented now.

It’s more punk rock now. A lot of the websites and stuff, they’re almost like online fanzines. And I’ve been reading a lot of the press that we’ve been getting, and its amazing. Not a single bad review yet. Everybody really, really likes this record.

GIITTV:Coming back to the resurrection of fuzz guitar / shoegaze bands: what bands of this style old and new you like?

CO: You know what, I’ve never been into shoegaze music, and I’ll tell you why: I find it too immediate and a bit boring. I don’t use any effects like reverb or delay on my guitar, I never really have. If I did, I would use it lightly. I love the sound of the electric guitar but I hate it when it is swamped in effects. I always felt that if you took the delay and reverb out of shoegaze music, you where left with precious little. We are always compared to My Bloody Valentine and I don’t even own any of their records. The one band that I tried to copy from that kind of sound was The Wedding Present.

GIITTV: In general, what are your favourite artists that have been directly influential?

GIITTV: What key moments have there been with Six.By Seven over the years?

CO: I suppose our first Peel session was a key moment. We ended up doing five altogether. Jools Holland was great as well, especially as the producer picked us over John Spencer’s Blues Explosion – and he went mad!! I never really liked any of the Six.By Seven albums because they were so much of a compromise. The third was okay – but my favourite was :04. The new album is really great though and it’s the first album we made where we actually play every song off it.

GIITTV:I’d be interested to hear about pedals, amps, technical stuff of note over the years with the band… and of course, how you got onto making pedals and what the pedals are like (Chris makes pedals with guitarist Martin Cooper – they have customers ranging from Spiritualized to Stereophonics)?

CO: I’m not technical. I have a Rickenbacker 330 and it goes through a Colorsound overdrive into a Fender deluxe amp. I use a bit of wah wah here and there but that is it. I got into making pedals with Martin Cooper, he’s the expert. His pedals are the best out there in my opinion. I’m so used to my Colorsound overdrive though, I won’t change it.

GIITTV:You’ve done various music projects away from Six.By Seven, but how do they all compare with doing Six.By Seven, in terms of experience and creativity?

CO: The Twelve stuff is pretty good but nothing compares to making a racket in a band!

GIITTV: How do you react to people questioning you working under the Six.By Seven guise again?

CO: We are still trying, that’s all – still trying to get people to listen. We are just using the same name but no one wants to play the old stuff.

Living in Nottingham – are the band a product of Nottingham, has it had its influence? How does that manifest itself? It’s interesting that not that many bands get huge exposure from this area, and yet it is creative and interesting for music/gigs.

Bands are starting to get noticed from Notts because of Jake Bugg. It’s probably had an effect on us but I don’t know what it is as we have always been stationed here. It’s a good palce to tour from as it’s so central. It’s a vibrant city and a cool place to live. It’s funny but no one in Six.By Seven is from Nottingham, past and present members included.

GIITTV:Since I’ve not read about this anywhere, I wondered what the old Six.By Seven song Bochum was about? Did you live there?

CO: No, I lived near it though. I wrote the loop at the beginning of the song on a laptop whilst touring and called it Bochum as we were going past it on the autobahn. Later I used that in the song. It was about leaving the past behind and looking to the future. The verses are about the past and the chorus’ about my daughter Annieliese.

GIITTV:The music you make as Twelve feels very European, it’s also really cinematic and reminds me of the film Radio On. I wondered if this was an influence? Also, if you have other favourite films, especially for the soundtrack?

CO: I’ll have to check that out. I love all the John Carpenter stuff. I love Ennio Morricone, especially Once Upon A Time In America. I love all the Trent Reznor / Atticus Ross stuff recently too.

GIITTV: Finally, just going back to how I was making a comparison between you and The Cure: do ‘the sweetest songs tell of saddest thought’?

CO: Yes, I believe they do.