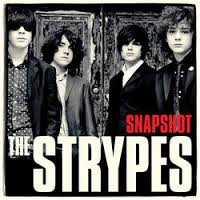 The Who. The Rolling Stones. The Yardbirds. Just three legendary bands this group of teenagers piss all over and then royally defecate on during the course of this pub-rock collection of standards and half-arsed new numbers. In the same way the likes of, say, Paulo Nutini and Jake Bugg were record company excecs’ wet dreams, so this bunch of over-excitable let-me-shag-your-leg-please kids must have The Man falling over himself at the thought of a new Oasis-in-waiting, hanging out pretending to do coke in the wings. Shag your girlfriend and spit beer on you sir? Why, don’t mind if I do! For verily I am a fledgling rock star!

The patronage of the likes of Weller and Gallagher Snr has always been the kiss of death. At least with Mr Bugg there is some genuine passion and musical heritage respect, a love of storytellers and a reinvention of the Dylan troubadour archetype. But to paraphrase Alan Partridge (or your dad) – this is just noise.

So The Strypes are a garage band in the style of The Clash (wrong). They love rock ‘n’ roll (well, they can play three chords). They’re young, dumb and full of cum. I don’t wish to be cynical. But I can’t help it. I love music. I love artists that push the envelope like R ‘n’ B did in the ’50s and ’60s. The danger of Bo Diddley and Jagger and co; Bowie‘s androgyny in the ’70s. I love a bit of musical history, me. In the words of the Godfather Iggy Pop – ‘things get too straight. I can’t bear it’. But this is danger reinvented for the 21st century as an Ikea coffee table coaster. You can see the kind of ‘mad fer it’ middle-aged ‘geezers’ who get fucked-up at Stone Roses gigs loving this and thinking they’re getting back into ‘new music’ again. Have you heard that bunch of innovators The Verve might be reuniting for the 11th time? Nice one la. Ooh look, The Strypes are the support band. Let’s book a babysitter, sort a gram or two and get there early!

Look. There is NOTHING wrong with what The Strypes are doing. They’re teenagers enjoying themselves and having fun. So let them do it. In their parents’ social club. At a village fete before the tombola. At a sixth form party where their mates are getting stoned for the first time. But shame on the record industry for getting it wrong. Again.
I bet they’ll be huge.