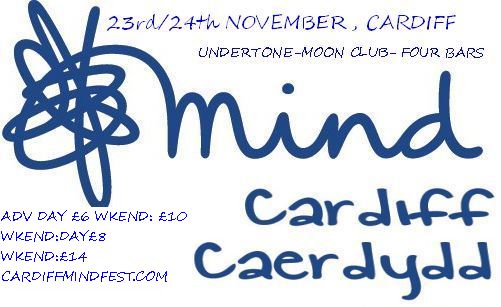 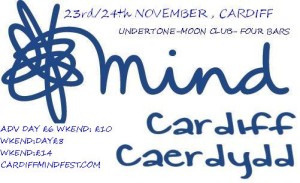 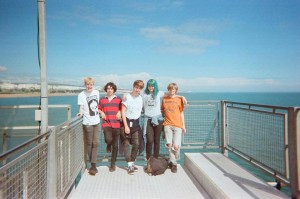 Joining Fist of the First Man, Gwenno and Totem Terrors at Undertone on Saturday the 23rd are excellent bilingual off beat pop of the Alex Dingley Band. Alex was formerly at the heart of the Texas Radio Band and released a single at the end of last year on Too Pure.  R.Seiliog who presents psychedelic swells of kinder-tone synths while the night is fired up by Welsh anti-pop hero Y Pencadlys and Bristolian noise makers Repo Man.

Meanwhile on Sunday the 24th on the God Is In The TV Zine stage The Moon Club a rocking bill which already includes Thee Faction, The Milk Race, and The Lash is further swelled by the addition of thrilling Cardiff-based noisepop five-piece Joanna Gruesome who released their terrific debut album Weird Sister via Fortuna POP! (Europe) this September, delightful female-fronted power pop act from Cardiff The Lovely Wars, who feature former members of The Pipettes and Victorian English Gentlemen’s Club. While experimental Oxford act Salvation Bill and emerging local-psych-tykes Tarsiers are sure to warm up the stage. Proceedings for the afternoon are eased open by Bristol’s Joyce The Librarian aka singer-songwriter Martin Callingham their sound is understated but undeniably beautiful, simple guitars and flashes of cello and trumpet back softly-spoken lyrics.

They are joined by Stephen Fry approved Nia a singer-songwriter now based in London but originally from North Wales with a hell of a voice and an ear for wonderful jazz/blues flecked storytelling song-writing. Pembrokeshire’s Nayfe SJ whose golden voice is at the heart of the work of Valleyers and Shiny Tiger aka Joel Dear who has been making rickety pop music since he was in sixth form. His shabby, shouty style has been compared to artists like Bright Eyes, Hefner, and Jonathan Richman. They are preceded by Cardiff’s Francesca’s Word Salad a solitary show-woman who tells lamentful tales through macabre ballads coloured by brass, The Skunk-Boy Project aka Nate Swettenham a singer-songwriter from Leicester, is a solo artist playing ukulele and piano and 19 year old Chambles is a precocious South Wales talent with a distinctive tone and 18th century influenced folk sound. The acoustic bill is completed by Swansea’s fiery emerging talent Sarah Passmore, and local open mic stalwart and mental health activist Dai Sharkey.

Three local promoters (God Is In The TV Zine, Rockpie and Red Medicine) have grouped together to organise a two day event, with the aim of promoting awareness of mental health issues within South Wales. Working with three mental health partner organisations (Cardiff Mind, Journeys and Making Minds) in South Wales, raising funds for Cardiff Mind.

Final acts to be announced in a last wave, shortly. Including the Rockpie Promotions stage at Four Bars at Dempseys on Saturday the 23rd of November.

SATURDAY THE 23RD OF NOVEMBER

Fist of the First man

SUNDAY THE 24TH OF NOVEMBER

Laurence Made Me Cry

Discounts for those on benefits/NUS.