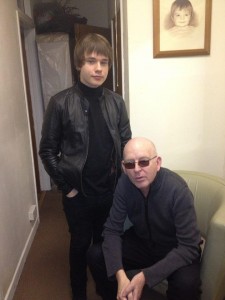 Well, I’d had my chances. I missed him when he DJ’d at The Mountain Ash Inn a year or so ago, then also missed him when he Dj’d for free at the Unemployed Disco in Cardiff. My brother also reckons the man in question was at a Hurricane No.1 gig we both went to in Cardiff many years ago, and I hadn’t spoken to him then. Well, finally tonight I spoke to Alan McGee, the former Creation Records boss. A very nice, genuine person (more smiley and less serious than I’d anticipated!), he had time to speak to everyone who went up to speak to him on this launch night of his new record label, 359.

Running a record label is something I’ve always fancied having a go at myself, but I’ve never quite got my act together to really have a stab at it, and given the state the music industry is in at the moment, where the need for record labels has significantly diminished, I think it would be even more difficult to establish a label now. When you’re as well known as Alan McGee, the risk is surely far less, and his eye for talent is as apparently all-seeing as ever – early signings, particularly the young aspiring star, John Lennon McCullagh, show both musical talent coupled with commercial promise. It’s also clear that there are many acts who are still keen to take the traditional route of being signed to a label rather than go it alone – Alan has had hundreds of demos thrust into his hands at gigs he’s put on in recent weeks, with many more sent via email.

Tonight’s showcase was kicked off by local act, Replaced by Robots. Their black shirts and red ties gave them a professional look – and certainly, these are no shirkers – a more than competent rock act, with a lively fast-paced set. Sounding something like a cross between Electric Six and the Mighty Mighty Bosstones (yes, they also have a trumpet player!), they have the same sense of fun, with a lead singer that is full of energy.

Next up we had Broken Vinyl Club. A little less frivolous, but again, demonstrating ample talent, they’ve already signed to the Acid Jazz label. Very much in the mode of mod bands, like The Moons, or Cardiff’s own (dearly departed), The Method, they therefore have a ready-made audience.

Well, we’d been kept waiting, but finally the much talked about John Lennon McCullagh (even Courtney Love has been heard singing his praises!) took to the stage. He is short and looks extremely unassuming, but still cuts a cool persona. The weight of expectation must be heavy on his shoulders – indeed, with a name like his, it may well have been all his life: his dad is obviously a keen music fan! However, there are absolutely no signs that this is affecting him. Still just 15, he has the demeanor of a much older musician, the unshakable air of someone aware of his own ability.

With his harmonica, guitar, and Dylan-esque vocal, he sounds like an old-fashioned protest singer. The lyrics he has been encouraged to write cement this, as he speaks of “No jobs, but dole queues” and “Factories..closed down, and the mines went years ago.” on latest single “North South Divide”. There is a sense that he’s not quite dealing with current political issues, but I suppose he’s got plenty of time to hone his craft! If this first effort is not the perfect protest song of the age, who is to say he may not go on to write many that are? With a lengthy set of 10+ songs, each one with something about it, his debut album, due in the Autumn will be one to listen out for. And if there’s any doubting his musicianship, here is a young man who carries 5 back-up harmonicas with him, so there’s virtually no room for technical glitches!

Thanks to a kind offer of a lift back to Cardiff by Kevin from Caerphilly (it was an early train, which would have meant missing most of JLM, otherwise), me and my friends were able to stay more or less till kicking out time, giving us more of a chance to mingle and get merry. With host and landlord, Mr Tony Rivers as welcoming as ever, it was, as the saying goes, another great night at the Inn! Alan McGee may have politely declined my offer to join the 359 staff, but hey, perhaps it might inspire me to set up a label myself after all!