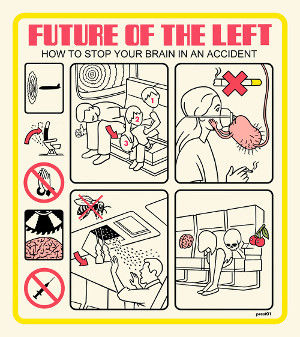 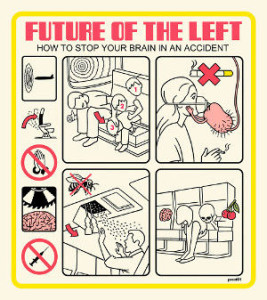 This is the best album Andy Falkous has ever put his name to.  mclusky Do Dallas?  Curses?  Travels With Myself And Another?  Strong contenders, yet still I stand by the claim that How To Stop Your Brain In An Accident is the greatest collective piece he’s been involved in the making of.  “Music is subjective, you cannot apply a hierarchy to this sort of thing” or “you’re talking absolute bollocks, you senile cunt”, I hear you say.  Well my friend, I’m sorry to inform you that those are the words of a loser, and that loser is you.  Whilst my hierarchy may differ to your own and citations to context, individuals and mood could render this statement circumstantial at best, it is indisputably true.  Excited?  You should be. You wouldn’t want to miss out, right?  Good lord.

There were already enough reasons to get excited for this album with the abundance of delights packed onto the EPs that followed the relatively disappointing The Plot Against Common Sense.  The Roland Juno-60 was reduced in prominence and the balance between wit, aggression and melody so perfectly balanced I ended up playing them more times than the LP which preceded them.  The band raised over double the money they needed funding the recording of this album through a PledgeMusic campaign appealing directly to the pockets of their hardcore fanbase in order to allow its existence.  A bold move from a band so evidently disillusioned with the music industry and the restrictions imposed thereupon.  Falkous strikes you as someone who would rather felate Michael Bay than be indebted to another.  Though on reflection the move makes a lot of sense when you consider the freedom it gives the band to do whatever they want, whether it’s releasing 36 tracks of psytrance or a reimagining of Toni Basil’s self-titled album through seven-layer accordion harmonies.  Those who pledged put complete trust into these four people making the right choices which is just how it should be.

The album begins with the assault of Bread Cheese Bow And Arrow’s unforgiving crunchy guitars, encapsulating ferocious unity.  Falkous’s voice jumps from scream to whimper in a way that gives a nod to Mike Patton in delivery, a welcome variation in his approach.  Falkous pushes the dynamics to and range of his vocal expressions to their limits, with the contrasting restrained moments giving increased impact to the throat shredding shouts.  Egglestone’s rimshots add subtle menace in their relative restraint on the introduction to the chorus, another example of the understated yet pivotal part he plays in this band.  The track’s similarities to adeadenemyalwayssmellsgood are undeniable, setting the tone that this is Future Of The Left playing to their strengths.  Though while its counterpart was one of the highlights of Curses, the treasures of How To Stop Your Brain In An Accident are such that you’d be forgiven for naming it as one of the more unremarkable here.

The following three tracks have all been previously available as part of the aforementioned Man Vs. Melody and Love Songs For Our Husbands EPs, as is the penultimate track The Real Meaning Of Christmas.  Only the latter sounds any different than its previous incarnations, with its punchier mix than its predecessor.  Such familiar tracks on a new release does feel odd at first though it doesn’t take many listens to reconceptualise them in this context.  I understand the reasoning, these songs were too good to be relegated to EP rarity status, so their revival sounds right.  It just goes to show how strong this collection of songs is that the exclusion of the excellent Bisexuality Of Distance can almost go unnoticed.

The Plot Against Common Sense sounded like a band familiarising themselves with each other, exploring the boundaries of what works and what does not whilst this album feels more like those teething troubles have been addressed.  The hooks are far more prominent, which plays to the strengths of the band.  I don’t want to hear Future Of The Left’s reimagining of Black Flag’s Rise Above 50 years after last hearing it, I want to hear Future Of The Left toning the appeal of their craft to the point where it can be taken no further.  That’s not to say that the experimentation has been lost completely, whether it’s the kazoos on Things To Say To Friendly Policemen, the hammed up English accented spoken word of Singing Of The Bonesaws or the applause track over Something Happened, the curveballs serve to accentuate Falkous’s delivery which has always been the most satisfying aspect of the band.  Every sound feels contextually appropriate despite how ridiculous it may read on paper.  In addition to the hallmark Egglestone svelt drumming and numerous Falkous trademarks, it’s touches like the EBow over I Don’t Know What You Ketamine and the unsettling bass line that wanders through Something Happened which help the band regain a cohesiveness some doubted would return after Kelsom’s departure.

It’s hard to isolate highlights in a creative high point such as this, even the balladeering French Lessons shows strengths in its tender relationship exploring sincerity which comes across more poignant than similar previous attempts at this delicacy.  For raw and loud gratification however, the double whammy of How To Spot A Record Company followed by Donny Of The Decks can’t help but push all the right buttons.  The departing coda of How To Spot A Record Company recalls Fugazi’s Epic Problem in its visceral satisfaction and definition from the rest of the song, giving you an excited anticipation on repeated listening.  This similar technique is also put to good effect in The Male Gaze and in both cases is incredibly effective.

Lyrically, Falkous the entire album is as rich as ever, with Falkous’s sharpened tongue far greater than just a sum of sound bites.  The characters described in She Gets Passed Around In Parties create such vivid mental images, you can’t help but feel a pang of empathy towards them. Such is Falkous’s gift for balancing the memorable, ridiculous and meaningful that you couldn’t imagine any other band getting away with the blunt monologue of Singing Of The Bonesaws. Images of Kim Kardasian being chased by a bear wearing a mask of the face of Michael Winner are as far from lyrical tropes as you can get, yet take on a strangely anthemic tone in this context.  Pushing the limits of lyrical absurdity yet coming from the mouth of Falkous feel somehow as natural as rhyming ghost with toast.  Whether isolated or within context, Falkous has a gifted knack for writing lyrics that add to the experience on multiple levels.  There’s plenty of sloganeering like “Roy just a boy with the biggest head in school” and “He was good with his hands” to remain stuck in your head long after the song has finished.

It’s odd still calling this the new Future Of The Left line-up considering that they’re perhaps now more prolific than the previous incarnation despite the little time they’ve been together.  You get the feeling that Falkous is really hitting his stride as a songwriter, creating seethingly cynical music with an anthemic quality that keeps them relevant and makes each Future Of The Left release an exciting prospect.  In a world where many musicians are struggling to make ends meet, becoming so disillusioned with their plight that they cease to carry on, I can only implore you to listen to and buy this music.  It would be a tragedy indeed to see this golden age of creation cut short for avoidable reasons.  In a year as spoiled for quality music as this one, I stand by the fact that this is a contender for the album of the year, if lists are what you need to validate quality and quantify opinion.  The world needs more Future Of The Left, so just do as they say and give them your fucking money.