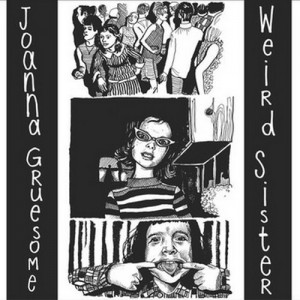 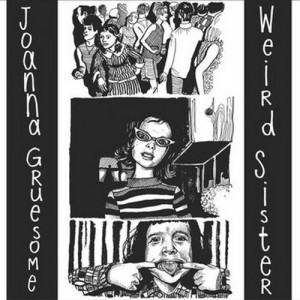 At the start of this year we were told that ‘Guitar music’ was back! We were presented with a line-up of new acts, with their side partings, uniform casual clothing, peddling facsimile copies of the best ‘indie’ bands of the 1980s and 1990s. Magpie like, greedily hoarding the shiny bits of the last twenty years of independent music, anything that managed to sneak it’s head above the parapet; a dash of Primal Scream baggy here, a side order of The Smiths there, a synth line from The Cure, with names like Peace, Palma Voliets, Jake Bugg, Swim Deep each one a carefully overly manicured, calculated stab at a target market in every facet a blander more corporate, a copy of a copy of a copy. They were not so much in love with their influences but adept and well rehearsed at reproducing them in more and more more pre-packaged ways and in all likelihood most of them will be forgotten in a year or two.

So we come to Cardiff five piece Joanna Gruesome whose raw bandcamp demos first grabbed our attention over eighteen months ago. Their début album Weird Sister is proof positive that guitar music had never been away. There are always exciting bands bubbling under the surface who challenge the cynicism of a corporate mainstream looking to pre-package and reproduce and this young band with an amusing parody name, far from wanting to create the perfectly over produced copy of the records they love, prefer smashing them up with gleeful abandon and throwing the pieces on the floor and seeing where they land, thumping you in the gut with brill bittersweet noise-tunes, head swirling kick ass bass/drum rhythms and an utter naive belief in what they are doing. Given more tightness and a slightly shinier coating by producer MJ of Hookworms, this is the band’s first foray out of the bedroom and into the studio. It’s the sound of not giving a fuck about record sales or markets, or the mainstream and their fantastic début Weird Sister is frankly all the better for it. Sure the influences are clear, the jangly c86 that slams into melodies, the rrriot girrrl yelps, the college rock influences of the late 80s and early 90s,the frantic punk of The Ramones, but most of all it’s the sound of growing up, breaking up and falling apart.

The shuddering ‘ Graveyard’ swerves and veers all over the road on a gravel work of electric bass and drums as Alana switching from shouty to lilting in an instance, while ‘Candy’ infuses the spirit of old My Bloody Valentine fuzz peddle records with a dreamy infatuated harmony. The sublime bittersweet sherbet lemon pop of the pummelling ‘Lemonade Grrrl’ is a highlight; ‘standing in your bathroom/feeling like it’s over now’ sings Alana, firing off a tale of doubting love that’s a deliciously scrappy sound of careering post punk rhythms and entangled boy/girl vocals riven with frantic The Wedding Present-esque riffs and bam-bam drums infused with the sweet disharmony of Throwing Muses. The thunderously giddy ‘Sugarcrush’ is excellently fizzy, dipping in and out of coy melodies and cascading drums it’s a thrill ride of joy and pain, encapsulating that giddy feeling in your belly when you get to see the one you are smitten with, only to be let down later on. While the superb ‘Madison’, the brutal fuzz pop wave machines of the head spinning verses cave into catchy as hell, heady, chorus lines of the kind that you can’t remove for days, takes you on a roller coaster ride of emotions from hope to futility to ecstasy and back again.

The see-sawing ‘Secret Surprise’ hits you hard; frantic indie pop waves wash through Alana McArdle’s almost riot girrrl yelps drawing graphic pictures of mental distress that takes a sharp physical form, before sweetly sung dark melodies“I’ve been waiting to crush your fucking skull” lets up the pace before the edifice of jangle fuzz, tumbling drum fills, comes clattering down on the face first on the floor. It’s like Husker Du being slung into a blender on full speed with Bikini Kill. Max Gruesome’s bassline and Dave Gruesome’s drum clatter of the more angular ‘Wussy Void’ are riven with Alana’s brittle vocal lines that laconically give him a good talking to, while chopping guitars punctuate. It reminds one of the work of The Breeders, crafty post punk infused with the heart of melancholic refrains. That Alana’s voice imprints each one of the songs gives this album added weight and contrast to the male-guitar-vox-sneer of George and Owen at its skidding side. It provides a feminine forcefulness that runs the gamut of feelings from fragility and embodies the perspective of how it is to be left hanging by a fella, and it is the expression of her sheer frustration that truly makes this album come alive. This is no more characterised by the juxtapositions of closer ‘Satan’ that winds from delicately plucked acoustic guitars to shuddering guitar stings and clatters while Alana shifts from almost dream like to spat out f-words…

Joanna Gruesome’s ‘Weird Sister’ is an unabashed long player. Sure it doesn’t push boundaries but it’s nascent heady boy/girl fuzz pop tunes crashes into your room, and then into your head and into your heart. It puts paid to the idea that modern music influenced by the records you love are just a indication of it’s all been done before and an example of how it can be reproduced scientifically to order and to satisfy ‘a perceived gap in the market’. JoGru’s incendiary début manages to sound so fresh and vital yet is clearly entangled with classic records of yore, an obsession with comic book and college rock culture. Where others sound copycat, Weird Sister manages to be a triumph. Weird Sister is gloriously fucked up with love, heartbreak and we really wouldn’t have it any other way.