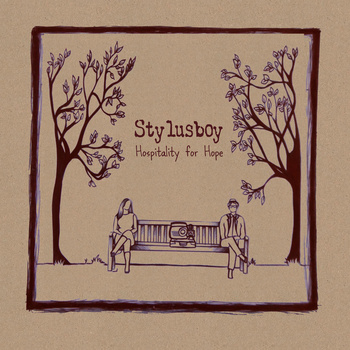 Emerging from guitarist, singer-songwriter and regular Midlands man Steve Jones’ imagination, Stylusboy has been around for a while. By September 2009, Rachel Grisedale had already contributed vocals to ‘Fingerprint EP’ , the first Stylusboy release, and since then their musical partnership has developed and flourished through a raft of more EPs, live sessions and live shows to the point now where they have just released their first full feature length recording together.

That it is the retro model of the early 1960’s Bush VTR103C portable transistor radio depicted on the cover of Hospitality for Hope would seem to be totally befitting. Nestling between Jones and Grisedale it sits there as a proud symbol of the links the duo has forged between the old and new. Theirs is a sound that continues to explore and advance the relationship which exists between more traditional folk and popular music.

As much as Grisedale’s voice is a wonderful counterpoint to that of Jones, it is her innate sense of the melancholy and his optimism that perhaps provides a greater balance. This collaborative process is heard to brilliant effect on ‘Love’s Tale’ where their voices and emotional responses dovetail together in a song of quite simple, yet perfect execution. “This is the start of something beautiful……this is the start of something new”, Jones and Grisedale sing in complete harmony. It could very easily be a narrative for the future of Stylusboy.