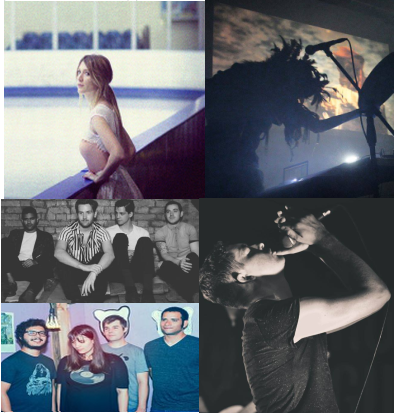 It’s fair to say we have been a tad disappointed by the safeness of some of the Tips for 2014 lists we’ve eye’d so far, anyway here’s the first in our selection of emerging new artists for next year. Unlike some tail chasing lists we aren’t really saying they will all be massive(what does that matter anymore anyhow?) in some kind of self fulfilling mantra,  but we are saying they have the potential ability and sound to demand your attention in the next twelve months.

First up our very own Linn Branson a lady with her finger on the throbbing pulse of new music picks out one to watch: 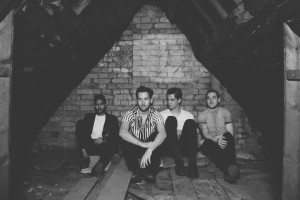 CROWS
If a band’s chances of success could be judged solely on live performance alone, then the gritty and primal London garage/psych rock four-piece Crows are already heads above the rest of the pack. Exciting, raw, intense, and in frontman James Cox they have a figure who just craves one’s attention, with his menacingly forbidding persona and banshee wails. With two singles – ‘Frankish Empire’ and the masterly thumping stomper  ‘Silver Tongues’ – produced by Hookworms’ MJ this year, promoters alerted by word-of-mouth on their exciting live, already sorting out slots for 2014, and the burgeoning support from many factions of the music press, Crows are one band that everyone should make a point of seeing at least once in 2014. (Linn Branson)
https://www.facebook.com/londonCROWS
Silver Tongues http://soundcloud.com/dolphinarium
2014 Music Tips from Peter Dysart our man in the States: 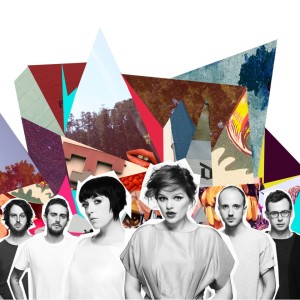 ALPINE
Fresh off their debut release of 2013 “A is for Alpine”, ALPINE slip past the easy descriptions whilst remained firmly greased in the ether. Is it pop rock? Math rock? Femme pop? Does it matter? Listening to ALPINE is the practical application of Feynman’s Double Slit Paradox — a single band simultaneously existing and performing in multiple musical universes — and all to the delight of an appreciative and growing fan base. Supported by tight but atmospheric compositions and punchy rhythms, the lovely Lou James and Phoebe Baker are like two diving swallows, crisscrossing each other on vocals. Back in Melbourne, Australia and busy writing and recording their sophomore effort, this lovely band are my ones to watch for 2014.(Peter Dysart) 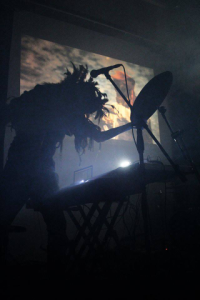 Nordic Giants
My early prediction is that Nordic Giants will be very big in a few years, though perhaps not in the typical fashion of rock and roll fame and fortune. Rather, Nordic Giants are composing epically conceived and often heart pounding multi-media presentation ala Public Service Broadcasting, whilst collecting some of the best vocal talent along the way. Expect more slow building compositions that swell and crash down with a panoramic delight, as these giants expand the boundaries of art rock to create a new sonic and cinematic landscape.  (Peter Dysart) 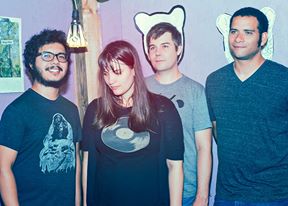 Panda Riot
In what I earnestly hope is not another revival of “Bands with Crystal in Their Name” fiasco, Chicago-based Panda Riot have beamed back from the year 2037 to bridge an interesting gap between the dreamy electropop and minimalist shoegaze realms. They’ve splashed down somewhere in the middle with lilting vocals and deafeningly delightful results. Their new release “Northern Automatic Music” should quickly solidify fan interest. Crank up the chorus of “Amanda in the Clouds” — it is simply brilliant, delivering angular chord changes from a haunting wall of fuzz effect. Another easy pick for “bands to watch.”   (Peter Dysart) 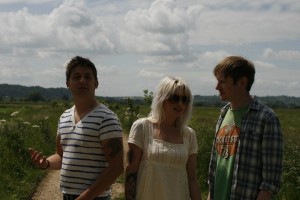 Presents for Sally
Yes, another era of gazing is at hand. We’ve already heard from The Fauns, but here’s Presents for Sally. Sporting dancing beats and loads of echo-reverb and walls of melting fuzz, Presents for Sally is fully reminiscent of all the best things we recall the first time around but with something new and fresh in the mix. (Peter Dysart)
GIITTV Editor Bill Cummings reveals the first of his selection of nods for 2014.

PAWWS
PAWWS (note the extra W) is the moniker of Londoner Lucy Taylor, who delivers shudderingly fantastic slithers of sensuous soulful electro that will illuminate 2014. Prime cuts are the swooping heartbreak of ‘Time To Say Goodbye’ and pulsing ‘Slow Love’. Lucy’s and deliciously whispy mid falsetto allied to her dexterous backdrops lingers somewhere between Kate Bush’s artfulness, Alison Goldfrapp’s skill and Kylie’s pop playfulness. Futuristic yet timeless: PAWWS sound is just as at home swaying on the dancefloor as it is soundtracking the come down, which after all is what the best disco tracks of the 70s and ’80s, excelled at.(Bill Cummings)
www.soundcloud.com/pawws www.pawwsmusic.co.uk

Finally a heads up from Louise Ali about Russian Gun Dogs an act rooted in their surroundings who want to snatch your hearts!

RUSSIAN GUNDOGS
Do the best bands come out of nowhere? Maybe as far as your general music consuming public is concerned, yes. One moment a band is in complete obscurity – they might as well not even walk the face of this earth – then suddenly they achieve that most prized of all things: a spot on the Radio 1 playlist, a top 40 hit, the gigs sell out. But no band ever comes from nowhere. They always come from somewhere. Russian Gun Dogs are a band who are acutely aware of where they come from. You can hear it in their music and you can see it written on their faces. For they are ‘Coventry kids’ – you know, that place just outside Birmingham, in the West Midlands (I know you’re doing the accent in your head), that was bombed to bits in the Second World War. Oh yeah, Coventry. Now what else is that famous for? Well, there’s the declining fortunes of Coventry City Football Club (RGD are big supporters), who don’t even play their home matches in the city anymore, something that riles the band as much as anyone else. And, of course, there is the city’s rich musical heritage: Two Tone, Ska, The Specials, The Selecter, The Primitives, The Enemy… need I go on?

It is this sense of geography and of history that makes Russian Gun Dogs undeniably a Coventry band down to their bones. But what is also evident is their absolute passion for what they do – and a glint of ambition in their eyes to mobilise their forces and take over the world.   The Gun Dogs – led by Wireless Operator (lead singer and frontman) Paul Watters – are a tight, well-rehearsed outfit with that thing that surely all music labels desire: an image, a complete package of not only amazingly good songs – some of them truly anthemic – but a sense of direction that is evident in everything from their logo to their stylised band images and the cover artwork of their two, self-financed, independent single releases to date.   Survive is an anthem of struggle in the face of adversity that highlights our inability, at times, to question what is inherently wrong (‘None of this seems right, but who am I?’) andSurrender is an anthem of the heart, where the singer pleads for the listener to wave a white flag of submission to his affections (I’m sure many fans will). RGD ‘trade in dark-wave indie’. Thought has gone into how they pitch themselves to their future fans and in their group photos they undoubtedly look like an indie band: a motley crew of varying heights and haircuts staring blankly but intensely at the camera.

All of the band’s ‘Wing Commanders’ have an equitable and vital role to play in what you sense is a band as tight in their relationships with one another as they are in their musical renditions. Newest band member, drummer Kirk Savage, provides a driving rhythm for the Gun Dogs’ upbeat tracks and a sultry backing beat for the band’s darker numbers. Bassist Tom Bailey delivers pounding, bouncing bass lines that pull RGD’s sound together and pin it to the floor, at times reminiscent of Peter Hook on the band’s notably new wave inspired tracks. These appear to ooze influences from Joy Division through to fellow Midlanders, Editors. It’s perhaps not surprising to find out, then, that RGD have spent time in the studio with producer, Gavin Monaghan. Russian Gun Dogs are, at their heart, a guitar driven band, with minimalist but killer guitar hooks and shimmering guitar crescendos, provided by Phil Morley, both in evidence in their, as yet unreleased, back catalogue. Meanwhile, the band’s perfect integration of a more electronic sound courtesy of the melodic synthesised lines of Tom Goodwin is becoming more and more evident as RGD’s sound evolves. No more so is this in evidence than on the band’s first chosen single release, Survive, which unashamedly drips with pretty keyboard melodies.   But it is their frontman who is undoubtedly the Squad Commander of these talented recruits. As well as being lead vocalist and chief lyricist, you sense that Watters – a fine art graduate from a former polytechnic (well, he had to be, really) – is the driving force of the band’s direction and ambition. Here is someone who has very probably had to defend his hometown, his background, his choice of educational establishment and his football club on numerous occasions. But then, the maligned often demonstrate the most pride in their roots. Russian Gun Dogs have convinced Coventrians of their greatness, the label ‘Coventry heroes’ being frequently used in local press reviews. They were selected as a BBC Introducing act for Coventry and Warwickshire last year and shared a stage with the likes ofMallory Knox and Maximo Park at this year’s record attendanceGodiva Festival. There, they proved their ability to connect with someone across a field of hundreds (for that is where this writer first saw them) just as well as in the small, dark side rooms of city centre music venues.
During a recent short set supporting The Pigeon Detectives at Coventry’s Kasbah, much like a manager decides not to select his most experienced players for a friendly, RGD used the opportunity to try out some new material and carefully packaged it with their singles

to test their audible direction. Although older tracks like Lights – a sexy, post punk love song – were sadly missing, new songs like Invincible slotted neatly alongside their established ones. But the move towards a more-rounded sound, where guitar and synth fire in equal rounds, is definitely evident. In fact, when they’re not observational, quite a lot of Russian Gun Dogs’ lyrics concern affairs of the heart, so maybe these guys are lovers, not fighters, after all: heroes with a heart. And they certainly wear their hearts on their sleeves as much as they do their commitment to the band, each other and CCFC (see Watters’ band tattoo and his arm scribblings at the Godiva Festival). It’s not exactly’4 REAL’ but it still shows passion and no fear of showing it. So, RGD, we await your next tactical move in your propaganda campaign to win

Who are your tips? Answers on a post card?