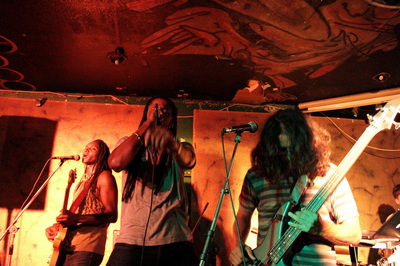 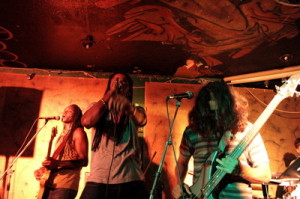 Many bands in the past have not been given the chance to have a voice. The only way to hear a band or a musician was to catch them in a local pub and hopefully follow them until a label takes interest. To some extent this is still the case, but because of the assistance of social media such as Twitter, Facebook, Bandcamp and Soundcloud this has helped many unsigned bands get closer to their listeners.

On this occasion here is something different for your ears; Mangoseed, a south London outfit with members of Australian, Trinidadian and Jamaican decent. They were invited by Poeticat to play with them on their monthly residency at Brixton Windmill. On that particular evening, Mangoseed began to play a fusion of influences from reggae to rock with funk laden heavy bass in between. Their energy filled the crowd, who moved to the dance floor when hearing the groove in their sound.

It’s difficult to classify Mangoseed into one genre; many influences surround them, such as heavy rock, reggae, ska and funk. Their sound is moulded together by Nicholai Barrie whose presence as the front man exudes confidence on stage and makes the lyrics flow from him as if they are with him every second of the day. Bass player Richard Hardy is impressive with his funky bass skills. Co- founding member Karlos Coleman on guitar hands out a rhythm that adds the fusion which again combines their sound.

Since their formation in 2008 they have toured wherever they have been asked, which has led them to support local south Londoners Alabama 3 and also Miki Free on his world tour of 2013. Mangoseed are yet to be snapped up by a label, but this doesn’t mean no one is listening or watching as proof from their ever growing fan base.

Nicholai Barrie’s voice is passionate; while Karlos Coleman is able to make cool, exciting sounds with his guitar. It is also obvious that Richard Hardy wasn’t asked to join this band because they needed someone to make up numbers, his skills on the bass can be compared to the likes of Les Claypool. Sam Campbell on drums calmly sits at the back, smoothly keeping the rhythm and timing together.

A self-titled EP that shows class and a presence on  record, an EP that will no doubt get more people listening to what they have on offer. Their sound is a distinctive fusion of guitar riffs, hip hop lyrics, energized flow, and a professionalism that shows on a rock flavoured tune Standing on High to the chilled vibe of This Life.

Mangoseed are currently working on a debut album looking to be released in March of 2014. There are no music moguls sending them to red carpet events of third rate movie premiers or certain morning chat shows to build a release for Christmas … only never to be heard of again. Saying that, there are plenty of record companies out there who do look after bands. Mangoseed will be a superb addition to a label if they decide to go that way. They are an impressive live band with a six track EP behind them already. This mature band are growing with every live performance, every new song written, every new sound made. Occasionally unsigned bands need more help to get their name pushed out to a wider audience, and that is what we are here to do.