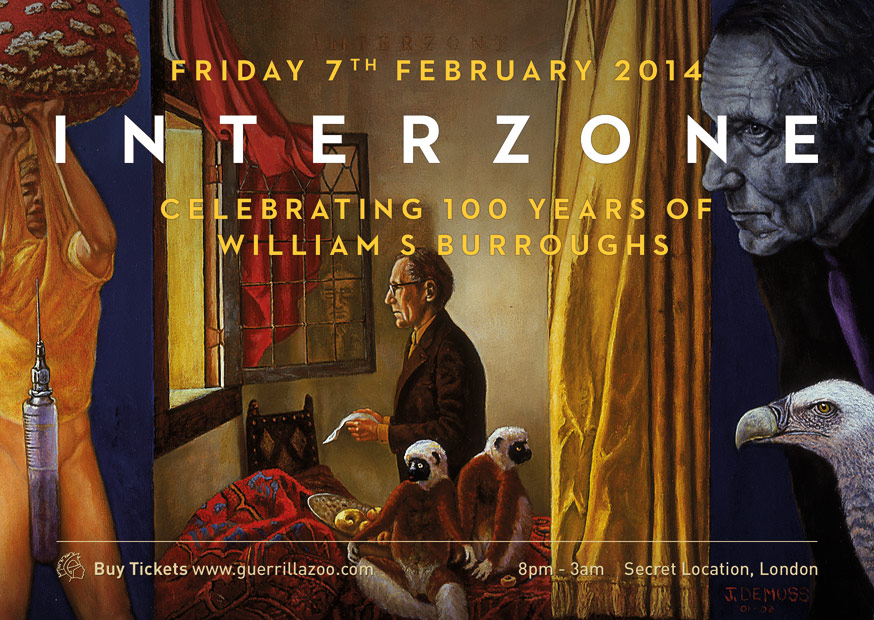 This piece affords me the opportunity to use Jack Kerouac’s words as my own to describe the one and only… William S. Burroughs.

It would take all night to tell about William Burroughs; let’s just say, he was a teacher, and it may be said that he had every right to teach because he spent all of his time learning; not out of necessity but because he wanted to.

Labels like; writer, painter, gun enthusiast, drug taker, murderer, all apply to Burroughs but evade his definition. He has to this day much to teach us about and despite this his death in 1997, his one-hundredth birthday is being celebrated in London onFebruary 7th.

Interzone is Burroughs’ paranoid landscape recreated for a one-day event in a secret location. Guerrilla Zoo celebrating the writer with an experience that should prove to be like no other. Theatre, music, performance art, films and instillations are going to be held from 8pm – 3am next Friday.

Burroughs the legendary writer is not simply a writer. This event by the same token is not simply an event. Personally, a single frustration in trying to explain Burroughs to people is that it is next to impossible to define what he is. Because, he himself, was a deconstruct-er of labels. This event, endorsed by his estate, evades similar definition too.

The author of books with names like Naked Lunch, The Soft Machine, Nova Express, The Ticket That Exploded naturally, would be hard to put into one category. Burroughs’ influence extends beyond literature though. Countless bands have used his words and phrases for their own names. Steely Dan is probably the most famous example of this, but Nova Mob (Grant Hart’s post Husker Du project) and The Mugwumps (Mama Cass’ pre Mama’s and the Papa’s project) also come to mind.

As an artist Burroughs experimented with new forms as well as drugs. Pioneering the cut-up method in books, he equally embraced the avant-garde with regards to his painting. Developing a method whereby he placed cans of spray paint in front of a canvas, shooting them with a shotgun from a distance. His first novel Junky also tells a story of heroin addiction, Burroughs having been an on-and-off user for the majority of his life.

Interzone will be a total immersion into the landscape of Burroughs. Despite killing his wife after a botched William Tell routine, he remains a figure of cult reverence. Burroughs is a character that only he himself could have come up with.  Something, as Interzone itself, which evades definition in the best of ways.

Details of the event are below.