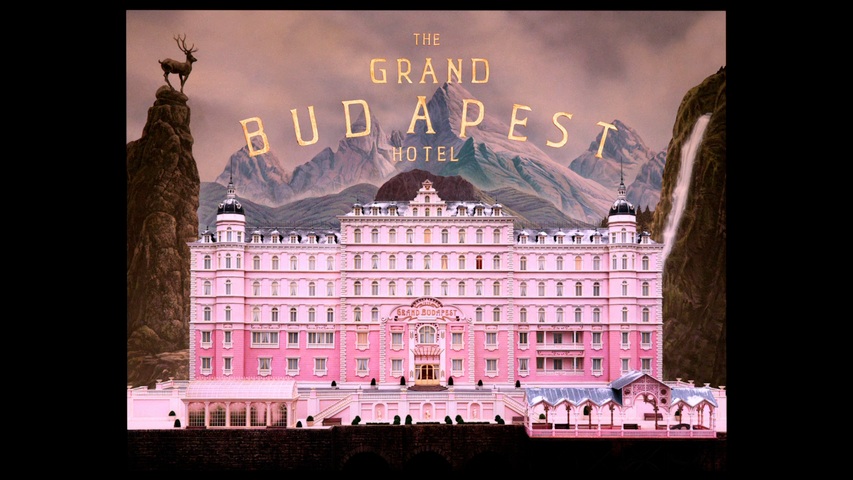 I hate myself for using the term but Wes Anderson’s films are like marmite, you’re either engrossed within the world of Wes Anderson the second the opening credits begin to roll, or the ‘tweeness’ of it all will have you rolling your eyes and wondering how people can claim that a film about finding a jaguar shark is one of the greatest films ever made, if you fall into the latter category, I understand and I forgive you, but give the grand Budapest a go, it has the one thing a lot of critics felt was missing from Andersons previous films, a gripping plot.

The story revolves around hotel concierge ‘M.Gustave’ (played by Ralph Fiennes) and lobby boy/understudy ‘Zero’ (Tony Revolori) who find themselves embroiled in a murder mystery when one of Gustave’s favourite ladies, Madame D. (Tilda Swinton) passes away and bequeaths a piece of priceless art in his name, much to the dismay of Madame D’s son Dmitri (Adrien Brody) and sidekick Jopling (Willem Dafoe) who shall stop at nothing to claim what they think they deserve. As well as the all star cameo cast (Bill Murray is in the film for about a minute, Jason Schwartzman is in it for around 3 minutes etc) and on top of that appearances by Jeff Goldblum, Edward Norton, Jude Law, and so on and so on and so on, every actor is on top of their game, however it’s Ralph Fiennes and Tony Revolori who make their debuts as members of the Wes Anderson team that put in the best performances, with Fiennes putting in a performance that may just top Schwartzman’s in Rushmore.

The film visually is one of the most beautiful films you will ever see, Wes Anderson is clearly a talented man who knows just how to make every single scene beautiful in its own unique way, yet I’m reserving judgement until he sets a film in Hull, now there’s a real challenge for you, Wes.

The Grand Budapest Hotel soundtrack is a totally charming affair, the songs capturing the vibe perfectly, here we have a soundtrack that you feel you would actually go out and buy, no movie soundtrack has made me feel that way since ‘Ali G Indahouse’ yet Anderson and his team get it right every single time, Life Aquatic, Royal Tenenbaums and Darjeeling Limited are all classic Wes Anderson films, the soundtrack’s to them films play a big part of that, and The Grand Budapest hotel soundtrack exceeds your expectations, taking you back to the early 20th century. With all this included you would be led to believe that The Grand Budapest Hotel is Andersons’ masterpiece, but this is a director who seems to be getting better year by year, bring on the next one.