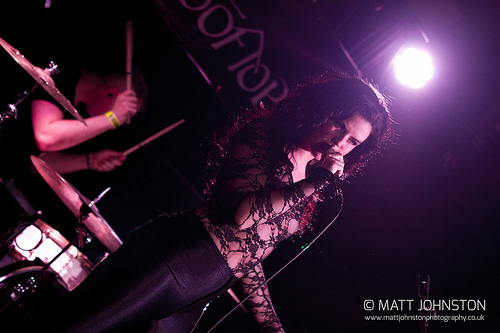 It was roughly a year to the day since I had my first encounter with Stockport based rockers, Mohawk Radio, and over the past couple of months or so I’ve seen their potential gather momentum to the point where I’m convinced that they’re on the cusp of breaking through to the next level. With the award for winners of ‘Stockport’s Finest 2013’ firmly in the bank, playing City Square at the Etihad Stadium in early 2014, and the recent completion of their anticipated second EP, due for release in the summer, exciting times are certainly afoot for this dynamic mixed gender four piece. 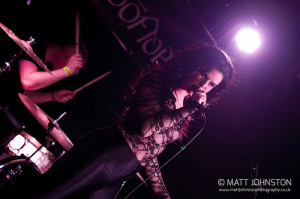 Tonight, Mohawk Radio are the main support act at Club Academy, Manchester, but they are so much more deserving of bigger headline slots, which I’m sure will come to fruition in time. They are a band that genre hop between ballsy, foot stomping rock songs, to emotive soft rock/pop ballads. At the forefront of this is Bermuda born Mia Page, whose powerful vocals are unrivaled by any I’ve seen in the underground scene, and to be honest, most of the modern commercial scene too. Her range and power not only sounds great recorded, but when you add her larger than life stage presence into the mix, then you have an accomplished rock artist/performer who commands the stage in much the same way as her more famous predecessors, such as how the likes of Cher and Stevie Nicks made an impact with a rock band behind them. She may have been born in Bermuda, but she’s becoming a Manchester sensation as she appears onstage to ecstatic cheers and applause from the crowd who know only too well the enormous talent she possesses. She immediately hypnotises us from the moment she appears, opening with new track, ‘Oblivion’, a hard hitting rock song with riffs and melodies that hook you into the band instantly. Page is full of energy, strutting a confidence that bleeds from beyond this world, and why not with a vocal to boast about where she wails, hits and prolongs any note at any volume she desires.

Although the focus is on Page and her stage theatrics, it should be noted that the musicians behind her are key to the whole Mohawk Radio package. With a solid rhythm section of Dave Quinn on drums, and Sean Frankland on bass, and the illustrious guitar craft of James Gregory, who’s one of the most innovative in the underground scene, Mohawk Radio have the foundations to create something a little unique and special. They play with all the gusto and passion of a heavy rock band, but peel it back just one simple layer to make the sound so much more captivating and melodious. At times it sounds like stripped back metal that’s held back, bursting to detonate from its constrictions, but its Page’s control of the tempo of each song that won’t allow it to become too hard hitting, and that’s what makes the band sound so engaging and interesting.

‘QLC’ and a cover of Rita Ora’s ‘RIP’ are the next songs played, where the latter is a far superior version in this rock overhaul than its original intention that appeals to the masses. ‘Curious Morality’ sees the pace change, a wonderfully written emotive ballad that’s personal to Page as it tugs at the heart strings, showing the startling range and genre hopping ability within a band whose overall main preference is the heavy songs. ‘Lifetime Sunshine’ is another new one off the forthcoming EP that charters Page’s journey to Manchester from Bermuda, while having a tongue in cheek dig at our weather in the form of “I’ve had a Lifetime of Sunshine, I need a little bit of rain!” It’s a pop orientated song in its verses, which explodes into life for the chorus and as the song progresses. It’s a strong contender to be the most popular on the new EP given the whisperings amongst their fans. 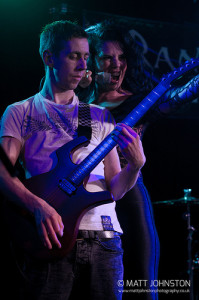 They end with fans favourite, and tagline for the band, ‘Rock n Roll Heaven’, from their debut EP, which is a classic hard hitting, rocking track that appeals to every one of us that wants to be saved from a routine existence. The line, “Take me to Rock n Roll Heaven!” is one that we all secretly crave, and Mohawk Radio do a fine job in taking you there.

On the back of winning ‘Stockport’s Finest’ in 2013, and with the finishing touches being applied to a second EP, Mohawk Radio are on course to really explode and make a difference in 2014. Their audience carried a large proportion of the younger, upcoming generations, which is a healthy sign if bands want to make an impact. Judging from the hoards of people that watched them, then left before the main act even set foot on the stage, it’s fair to say that they’ll be launched further into the spotlight sooner rather than later.