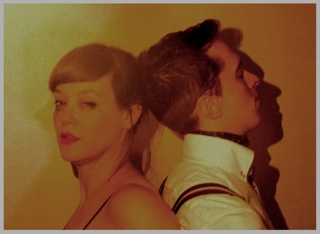 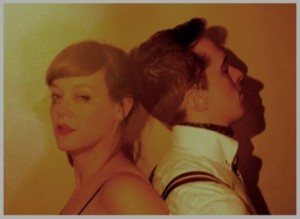 This is the sound of struggle, of two people that were lovers but can now barely be in the same space and time.

The two are Gemma Williams, who we so adored in her Woodpecker Wooliams guise, and Peter J D Mason, ex-Fence Collective (isn’t everyone apart from Kenny himself now ‘ex’?) and at times a regarded EDM re-mix-ist.

Becky Becky is their duo /electro / twisted pop vehicle that actually pre-dated Woodpecker, and got put on hold while the two of them found each other and then sorted out how to un-find themselves. For risk of getting someone else’s very personal story very wrong, I’m going to cut and paste the ‘official version’ under the video.

For those of you familiar with Woodpecker, and the superb one and only album, expect Gemma’s usual tales of the everyday turned to horror-show, decisions to drink herself to death and lewdly bleed businessmen of money along the way. Only this time, instead of harps it’s disco. And it works: I’ve had it on repeat five or six times now, to the point where my other half is seeking to un-find me.

Becky Becky formed in 2011. Whilst recording their first single ‘The Harder Stuff’, they became lovers and moved in together. Always intending to start work on a project inspired by Jean Rhys, their intense and tumultuous relationship put the brakes on their recording together. During this hiatus, Gemma found great critical acclaim with Woodpecker Wooliams and her debut album ‘The Bird School of Being Human’; she also guest-featured on singles by Ghostpoet, ‘Meltdown’, and Button Eyes,‘Simple Days’, whilst Peter quietly churned out remixes for The Pictish Trail (Fence Records & Lost Map Records), Kid Canaveral (Fence Records), Soccer96 (Demons Are Real Records) and others.

Eventually the personal relationship broke down and Peter left the UK for Europe with no intention of returning. However, as he travelled south from Sweden, the idea for ‘Good Morning, Midnight’ would not go away for either of them. Settling in Prague, writing began. They agreed to come together one last time for this project, and though most of the first recording sessions ended in screaming fights, after a week or so, they had a sketch of the album. Peter then retreated to a chateau on a mountain near the tiny Alpine village of Seythenex, France, to finish the recording and mixing. After testing out the material (and their working relationship) at a series of acclaimed yet tense gigs, they decided to release the album for 2014.

By this point, Gemma had killed off her Woodpecker Wooliams alter-ego in frustration and ostensibly left the music industry altogether. In order to release ‘Good Morning, Midnight’, Becky Becky formed their own imprint, FEINT – a label focused on putting control back into the hands of the artists – from the financial side of releasing and distributing, to the artistic side of art-work and videos. This DIY/can-do aesthetic is reflected in the hand-cut artwork for the CD release and the homemade videos for their singles.

‘Good Morning, Midnight’ will be released on 1st May 2014 for download (from www.beckybecky.com and iTunes) and on limited edition CD with hand-cut artwork. Videos/singles will be released during March and April for ‘Fire & Wings’, ‘Mask’ and one other track, to be confirmed. Becky Becky are play Yuri’s Night on 12th April at the Latest Music Bar, Brighton and an audio-visual album launch show will follow at the Green Door Store, Brighton, on 23rd May. Further gigs around the country and festival appearances are planned for the summer. In autumn they will play two shows in Rome, Italy, with further European dates to be confirmed.