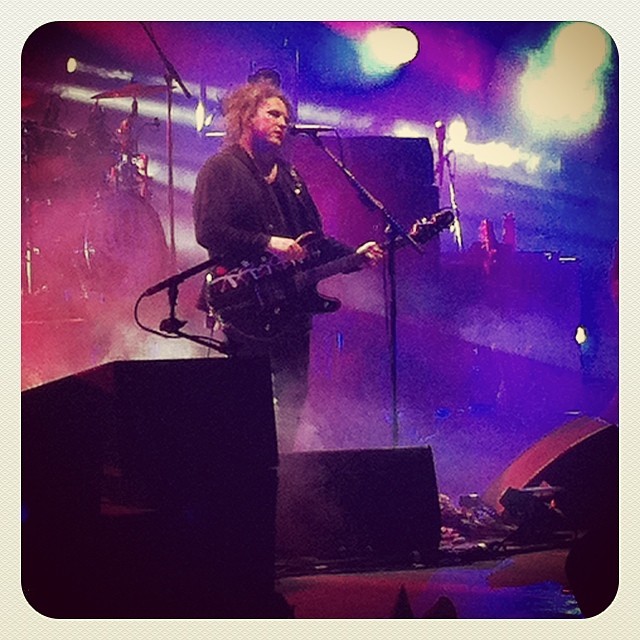 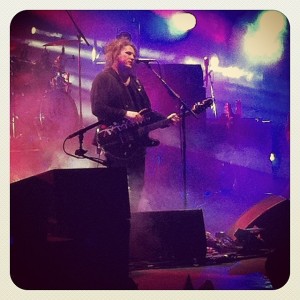 Mary Poole is the only girl to have ever featured in a video by The Cure.

I always found it uncannily sweet how Robert Smith said she was the only such occurrence in the Just Like Heaven video and he meant for her to remain the sole one. It made me wonder if during the sold out gigs at The Royal Albert Hall for the Teenage Cancer Trust she was somewhere, looking proudly at him, or because their love story is as unusual now as it was supposed to be normal a century ago, she just kissed him like you’d kiss your husband before he goes to work and “don’t be too silly today hun” as she went on doing her own things.

See, the moment the lights went down and one by one The Cure came on the stage, the last one to appear, of course Robert Smith, left me at a loss for a moment. I wasn’t even star struck, but I think it was some sort of Stendhal syndrome, for in that man with fuzzy hair and heavy eyeliner lies so much history and meaning it made me feel nostalgic for an era I wasn’t even born into to miss. A time when minutes long instrumental intros were not only acceptable: they were defining of a style and scenario to be immersed within, which the 3:15 average song today cannot deliver, and possibly doesn’t even aspire to.

Everyone can tell you that is just the most amazing thing for these fifty years old men to have played for almost four hours during two consecutive nights. Which is a testament to their energy because I was tired by 9.30pm just from sitting (and dancing, and singing), but there’s a much deeper layer even to such a lengthy gig, where time is just a collateral effect.

Seeing The Cure play songs, never even played before b-sides (“2 Late” ladies and gentlemen, I rest my case), for interminable hour-long minutes allowed the crowd to witness them as these ageless artists are, because the songs they performed didn’t span four hours, nor nineteen years (from 1979 to 2008 in studio albums time), but just created that seamless scenario where there is no need to hope for one more encore, one more song, or one more album to be eventually released. There is no point in thinking about forever because you have the best part of it already where you are stuck in time, and the main source of that feeling is Robert Smith, I suspect.

They talk about old souls all the time, but what I think about was pure intuition well metaphorised by Robert Smith’s inspired Cheyenne in Paolo Sorrentino’s “This Must Be The Place”, is that it can go the other way around as well, and there can be souls whom stay young despite or in spite the ageing body they are trapped in, and in Robert Smith’s case the effortlessness with which his hair, his Ruby Woo lips and kajal eyes are still there (and so have always been, to simply get him closer to express what was a meaningful vision of his character to his own self rather than a statement) reveal that innocence and naiveté (never childish) which would justify the amount of enthusiasm and authenticity he can still deliver, undiluted, after four hours or nineteen years he has played and performed, where forever doesn’t matter if you can make time stand still.

The calm and quietly composed demeanour with which he manages all of his proxemics feels almost unusual given the amount of wannabe and lookalikes he involuntarily inspired over the years. Yet you see none of the eccentric flamboyance you’ve come to expect as a statement when paired with such a style. But that’s where the original need for expression comes in without the need for statements: and on stage Robert Smith looks, moves, and sings like he promised, like he established in every single record and like it’s always been just him.

Legend has it Robert and Mary met in school aged fourteen and have been together ever since, which is a rare occurrence in general and a unique one when someone is involved in the entertainment industry. Yet as private as that’s always been the impression it gave me was that they shared this ability to contemplate and look on the inside, which in Robert’s case becomes manifest with the entire (sometimes dark) worlds he can conjure and describe in detail. Where the only issue is to find a way and shut out the noise coming from the outside to have the ability to enjoy and get consciously lost in just a figment of time and space.

It wasn’t a wormhole to the 1980s The Cure created at the Royal Albert Hall on the 28th and 29th of March: it was access to a displaced yet very well defined moment in time, where nothing needs to be relevant historically or even culturally to just bathe, delve and enjoy a wander around the beautiful mind of Robert Smith via his melodies and lyrics. It was all dedicated to gift people with that time actually, because we didn’t spend four hours listening there, but we evaded somehow the very specific timelines we’re all part of, just like The Cure seem to be able to do constantly, to the point that if I were to bet immortality on someone, Smith would be my pick.

But there it is again, the common mistake of thinking in the profane, thinking grandly in terms of time and future and forever, when all that I should’ve learnt from The Cure’s gig is that here and now is all that matters, and therefore all that ever will.