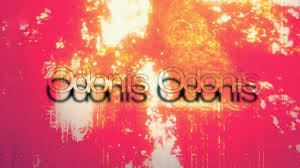 Out of Toronto here we have Odonis Odonis, three guys who make one hell of a racket. Citing influence from The Jesus & Mary Chain, Pixies & The Cure, they create a wall of sound that is surprisingly accessible and a modern day comparator is A Place To Bury Strangers. They released a debut album two years ago and now the sophomore is upon us. Entitled ‘Hard Boiled Soft Boiled’, it’s an extremely good album that I implore you to listen to; here’s your first opportunity.