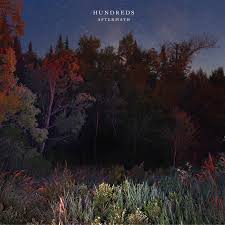 The band that is Hundreds is marked with quaint contradiction; strange little anomalies. Instead of five score and more, Hundreds number only two. Eva and Philip Milner, brother and sister are they. For the past eighteen months the Hamburg duo have been bunkered away in the heart of the German countryside readying for release the follow-up to their eponymous début album. Entitled Aftermath it is not as its name might suggest a dark consequence that lies in the wake of some unspecified disaster. Instead it is revealed as a sumptuous slice of spectral pop; three quarters of one very hopeful hour spent in the Milners’ most captivating company.

Unifying the synthetic production of Philip’s extensive electronics with the pure, pristine sound of Eva’s voice is the solid foundation upon which the record is built. Following the opening title track which spans the divide between the band’s two long playing releases comes recent single ‘Circus’, a somnambulist trek through the vast open spaces of the song’s carnival sound. The gorgeous piano-driven ballad that is ‘Ten-Headed Beast’ then serves as a perfect, reflective counterpoint

As Aftermath gathers momentum it becomes enveloped in a swathe of swirling synthesised strings, an occasionally huge faux-orchestral sweep that is as melodramatic as it is natural. ‘Our Past’ skips by, carried along by the sheer energy of its relentless beat; ‘Interplanetary’ is a foray into some brave new cosmos where The Carpenters meet the ghosts of synth-pop past; the burbling rhythm of ‘Rabbits On The Roof’ is vaguely unsettling; and as if to confirm that Hundreds are not all about hope and expectation, ‘Please Rewind’ plots an altogether darker path into some smoke-stacked bygone day, one covered in industrial grime.

Aftermath is a bold, expressive record; twelve individual tracks that maintain the delicate balance which exists between the shadows and light of all that is great in dramatic popular music.