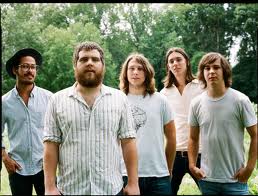 Band names can cause geographical confusion at times – the other day I informed you that Tokyo Police Club are Canadian, now I feature Manchester Orchestra who hark from Atlanta and apparently Japan were from Catford, what’s that all about?! The one in the middle have just released their fourth album called ‘Cope’. Their previous three have shown steady commercial progress in the US but little impact in blighty. Early showings on the new one however suggests we are buying in at last. That’s a good thing for this lot are starting to become a formidable prospect. ‘Cope’ is a sophisticated creature too, with complexity yet simplicity. It has a fair amount of drive too and is well structured, so most definitely requires your attention – here’s a track from it.